3 Public acceptance of the 24/7 toll ring in Oslo: Opinion polls have unveiled negative attitudes Q2: Do you think that the Oslo toll ring is a very negative, rather negative, rather positive or very positive measure ? %. The Oslo toll ring Oslopk. 2 Oslopk. 3. opened in Feb 1990. Year Increase in negative attitudes in 2001 due to: 1. introduction of Oslo Package : NOK 2 extra earmarked for public transport 2. a fear that the toll ring would not be removed in 2007 as promised A new increase in negative attitudes in 2007 and 2008 due to Oslo Package no. 3 . Finally, in 2014, we got a change of opinion to a positive majority How was it possible, in 1990, to implement a toll scheme in Oslo that 70% opposed ? The toll was to finance Low fees road infrastructure Limited collection period road traffic conditions was supposed were choking People opposed to cars The major political like motorists having to parties agreed pay Bergen opened a success- ful toll ring in 1986 20% of toll revenue was earmarked for public Extra State funding transport 4.

5 Oslo toll plaza no. 5 on a western arterial (before 2/2-2008). The AutoPASS . EFC-lane: High capacity, approx. 1600 vehicles/hour Approx. 300 v/hour cap. in coin machine and attended lanes ( Manuell ). No expansion of road area necessary Oslo toll plaza no. 5 in 2009 (with AET). 8. Oslo toll ring experience in the 1990s (Oslo package no. 1). Small changes in traffic volumes Almost no relocation of shops or work places No capacity problems Toll rings unfair to drivers Positive effects of a great number of tunnels financed by toll revenue: Reduced noise, pollution, barrier effects and accidents, plus more public space and better road capacity Oslo package no. 3 implemented in 2008. Adding an outer toll ring at the western border of Oslo to finance major road and railway projects west of Oslo A political Ring road 3. compromise B rum Oslo Increased fees E6. and change of fee structure E18 ORT introduced after having been tested in Oslo city T nsberg and border Bergen as from E18 E6 2004.

6 See next slides 9. Toll plaza on E6 north (the largest in Oslo). was changed on 2 February 2008. New AET toll plaza layout in Oslo Due to a road split, half of the E6 traffic now passes the new ORT. toll plaza shown to the left. Due to the need for a feedback signal adjacent to every payment lane, no plaza will have more than two payment lanes in parallel without an island in between. 10. Congestion Charging (yellow lines) favouring public transport was one of the options for Oslo Package 3. Fees (pcu): NOK 3 (1 unit) in both directions NOK 6 (2 units) in both directions + Double fees during peak periods + Free periods late evening and night + Double fees for heavy vehicles City borders Toll cordon lines in 1990. Oct. 2008 additional toll cordon line in B rum, outside Oslo's western border Congestion Charging (cc) in Norway Toll rings have been successful money machines , but politicians have been reluctant to mix with traffic regulation My opinion: Every big city should have a cc scheme to manage congestion and to finance infrastructure for public transport, park and ride, bicycling and walking etc.

8 A new Oslo package 3 agreement: o Time- and enviromental-differentiation of toll fees as from 2018. o 90% of toll money goes to infrastructure for public transport, walking and bicycling o 50 billions NOK extra for public transport and cycling infrastructure within the next 20 years o Increase income per year from 2,5 to 4,5 billions NOK. mmm 12. National actualities More and more cities with road packages Automation from passing a toll point to paying road Charging reform Regional toll companies Separate and fewer contractors on tags EL-vehicles, hybrids Selfdriving vehicles Distance based Charging (GNSS). Informing drivers about how to pay in an ORT system Advertisements and brochures News on TV and newspapers Listening to friends and family and 02012. TRAFFIC SIGNS (simplified in 2014 and 2016). Service stations (not in use after 2014). 13. Information boards - on national borders only Earlier (up to 2014), all tolling projects got dedicated information boards with local information including a local map and informing about service stations where the drivers could pay for single trips with cash, get information and achieve AutoPASS contracts and tags.

9 Traffic signs in open road tolling systems (before 2014). 2) Information 3). Automatiske board in lay-by bomstasjoner (see next slide). Automatic tolls 1) in Oslo i 1 km 6). 5). 4). 8). Service 7) station 14. Traffic signs in open road tolling systems (after 2016). 1). 5). 4). Congestion Charging (CC) in London Ken Livingstone promised to introduce CC in London in 2003, and he was elected mayor 1) Strengthening the public transport system, 2) Charging approx. USD 8 per day and 3) running an efficient information campaign made traffic and pollution decrease by approx. 20%. This led to an expansion of the CC area and a rate hike to about USD 13 a day. ):The capacity gains have been eroded, and the expansion was reversed in Jan. 2011. 15. How does it work? Charging 0700 1800. Monday Friday 10. (= USD 16 per day). Camera enforcement How to pay: Online: SMS (register first) or phone There are a number of Cash at agents or to self-service machines exemptions and 100%. discount vehicle groups Discounted Monthly or Annual prepayment For more details: Congestion tax in Stockholm After working on different Charging schemes in Stockholm for more than 15 years, they finally succeeded in August 2007.

10 People living inside the cordon line voted yes in 2006 after a trial period of 7 months. Strengthening the public transport system, Charging a tax in both directions when passing a cordon line around the central part of Stockholm and running an efficient information campaign has led to the same positive results as in London. In Stockholm, the results are stable. 16. 18 control points at Stockholm city entrances and exits Vehicles taxed when entering/. exiting the Stockholm city 1 August 2007: centre, an area of km . Tax equivalent to USD , Reintroduction of or per passage, depending on the time of day the congestion tax (see table). No tax levied at night or weekends. Foreigners are not charged. Exempted: Buses and green cars . Maximum amount per vehicle and day: USD 1/3 of city inhabitants live within the congestion tax zone Stockholm key success factors Technical system proved reliable on time! Communication was efficient Visible traffic improvements Professional and extensive evaluation programme Information is available in English at: Trangselskatt-i-stockholm/Informationsma terial/. 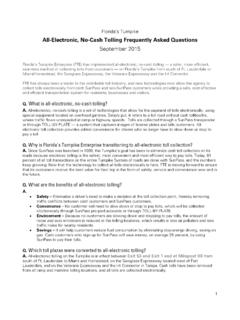 4 administrative charges. SunPass can be used to pay tolls on all toll roads and nearly all bridges throughout Florida, and to pay for parking at several major airports. 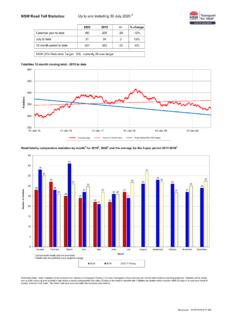 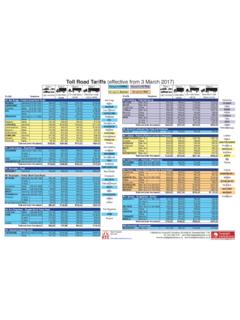 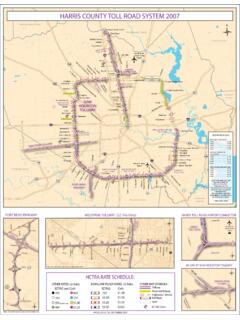 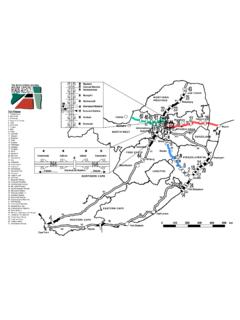