1 INTRODUCTION. WHAT IS ORGANIC CHEMISTRY ALL …

1 introduction . what IS ORGANIC CHEMISTRY ALL ABOUT? Y ou now are starting the study of ORGANIC CHEMISTRY , which is the CHEMISTRY of compounds of carbon. In this introductory chapter, we will tell you some- thing of the background and history of ORGANIC CHEMISTRY , something of the problems and the rewards involved, and something of our philosophy of what is important for you to learn so that you will have a reasonable working knowl- edge of the subject, whether you are just interested in CHEMISTRY or plan for a career as a chemist, an engineer, a physician, a biologist, and so on. The subject is very large; more than two million ORGANIC compounds have been isolated or prepared and characterized, yet the number of guiding principles is relatively small.

1 INTRODUCTION. WHAT IS ORGANIC CHEMISTRY ALL ABOUT? Y ou now are starting the study of organic chemistry, which is the chemistry of compounds of carbon.

What, Introduction, Chemistry, Organic, What is organic chemistry

1 1 introduction . what IS ORGANIC CHEMISTRY ALL ABOUT? Y ou now are starting the study of ORGANIC CHEMISTRY , which is the CHEMISTRY of compounds of carbon. In this introductory chapter, we will tell you some- thing of the background and history of ORGANIC CHEMISTRY , something of the problems and the rewards involved, and something of our philosophy of what is important for you to learn so that you will have a reasonable working knowl- edge of the subject, whether you are just interested in CHEMISTRY or plan for a career as a chemist, an engineer, a physician, a biologist, and so on. The subject is very large; more than two million ORGANIC compounds have been isolated or prepared and characterized, yet the number of guiding principles is relatively small.

2 You certainly will not learn everything about ORGANIC CHEMISTRY from this book, but with a good knowledge of the guiding principles, you will be able later to find out what you need to know either from the chemical literature, or directly by experiment in the laboratory. Unfortunately, learning about and learning how to use ORGANIC CHEMISTRY is not a straightforward process, wherein one step leads to another in a simple, logical way like Euclidean geometry. A more realistic analogy would be to consider yourself thrust into and required to deal successfully with a sizable group of strangers speaking a new and complex language. In such a situation, one has to make many decisions- how much of the language to learn at the 2 1 introduction .

3 what is ORGANIC CHEMISTRY All About? outset? Which people are the best to interact with first? Which will be the most important to know in the long run? How well does one have to know each person? How much does one have to know about the history of the group to understand their interactions? These are difficult questions, and a period of confusion, if not anxiety, is expected in any attempt to complete a task of this kind in a set, brief period of time. Clearly, it would be difficult to learn all at once the language, the people, and the interactions between them. Nonetheless, this is pretty much what is expected of you in learning ORGANIC CHEMISTRY . A number of approaches have been devised to help you become familiar with and use ORGANIC CHEMISTRY .

4 In terms of our analogy, one way is to learn the language, then the relationships between the people, and finally, well pre- pared, to proceed to interact with the people singly and then in groups. Such an approach may be logical in concept, but is not to everyone's taste as a way to learn. Many of us do better with an interactive approach, where language, relationships, and people are worked out more or less in concert, with atten- dant misunderstandings and ambiguities. what we will try to do is to introduce some of the important basic con- cepts and the elements of the language of ORGANIC CHEMISTRY , then show how these are used in connection with various classes of compounds. The initial round will be a fairly extensive one and you should not expect to be able to master everything at once.

5 This will take practice and we will provide oppor- tunity for practice. One of the appealing yet bothersome features of modern ORGANIC chemis- try is its extraordinary vitality. Unlike Euclidean geometry or classical me- chanics, it is evolving rapidly and many of the concepts introduced in this book are either new or have been drastically modified in the past ten years. Every issue of the current chemical journals has material of such basic interest that one would like to include it in an introductory course. Truly, those who write ORGANIC 'textbooks write on water, with no hope of producing the definitive book. Things just change too fast. Despite this, one of the great ideas of modern civilization, namely that ORGANIC compounds can be described in terms of more or less simple three-dimensional molecular structures with atoms held together by chemical bonds, has persisted for more than one hundred years and seems unlikely to be superseded, no matter how much it is refined and modified.

6 1-1 A BIT OF HISTORY You may not be much interested in the way that ORGANIC CHEMISTRY developed, but if you skip to the next section without reading further, you will miss some of the flavor of a truly great achievement- of how a few highly creative chem- ists were able, with the aid of a few simple tools, to determine the structures of molecules, far too small and too elusive to be seen individually with the finest optical microscope, manifesting themselves only by the collective be- havior of at least millions of millions at once. 1-1 A Bit of History Try to visualize the problems confronting the ORGANIC chemist of 100 years ago. You will have no more than reasonably pure samples of ORGANIC compounds, the common laboratory chemicals of today, glassware, balances, thermometers, means of measuring densities, and a few optical instruments.

7 You also will have a relatively embryonic theory that there are molecules in those bottles and that one compound differs from another because its mole- cules have different members or kinds of atoms and different arrangements of bonds. Your task will be to determine what kinds and what numbers of atoms they contain, that is, to determine their molecular formulas. Obviously, a compound with formula C,H,O and one with C,H,O, are not the same com- pound. But suppose two compounds from different sources both are C,H,O. To decide whether these are the same or different you could smell them (far better to sniff than to inhale), taste them (emphatically not recommended), see if they have the same appearance and viscosity (if liquids), or use more sophisticated criteria: boiling point, melting point, density, or refractive index.

8 Other possibilities would be to see if they both have the same solubility in water or other solvents and whether they give the same reaction products with various reagents. Of course, all this gets a bit tough when the compounds are not pure and no good ways are available to purify them, but that is part of the job. Think about how you might proceed. In retrospect it is surprising that in less than fifty years an enormous, even if incomplete, edifice of structural ORGANIC CHEMISTRY was constructed on the basis of the results of chemical reactions without determination of a single bond distance, and with no electronic theory as a guide. Interestingly, all of the subsequent developments of the quantum mechanical theory of chem- ical bonds has not altered this edifice in significant ways.

9 Indeed, for a long time, a goal of molecular quantum mechanics was simply to be able to corrob- orate that when an ORGANIC chemist draws a single line between two carbon atoms to show that they are bonded, he in fact knows what he is doing. And that when he draws two (or three) bonds between the carbons to indicate a double (or triple) bond, quantum mechanics supports this also as a valid idea. Furthermore, when modern tools for determining ORGANIC structures that involve actually measuring the distances between the atoms became available, these provided great convenience, but no great surprises. To be sure, a few structures turned out to be incorrect because they were based on faulty or inadequate experimental evidence. But, on the whole, the modern three- dimensional representations of molecules that accord with actual measure- ments of bond distances and angles are in no important respect different from the widely used three-dimensional ball-and-stick models of ORGANIC molecules, and these, in essentially their present form, date from at least as far back as E.

10 Paterno, in 1869. How was all of this achieved? Not by any very simple process. The essence of some of the important ideas follow, but it should be clear that what actually took place was far from straightforward. A diverse group of people was involved; many firmly committed to, if not having a vested interest in, earlier working hypotheses or paradigms that had served as useful bases for earlier experimentation, but were coming apart at the seams because they could 1 lntroduct~on what IS Organ~c CHEMISTRY All About? not accommodate the new facts that kept emerging. As is usual in human en- deavors, espousal of new and better ideas did not come equally quickly to all those used to thinking in particular ways. To illustrate, at least one famous chemist, Berthelot, still used HO as the formula for water twenty-five years after it seemed clear that H,O was a better choice. STRUCTURAL ORGANIC CHEMISTRY. THE SHAPES OF … 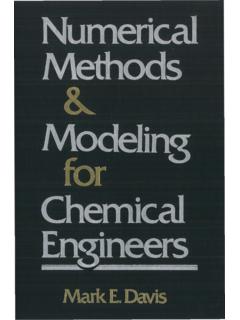 cc: and Modeling Chemical ... This book is an introduction to the quantitative treatment of ... of Chemical Engineering at Virginia Polytechnic Institute and ... 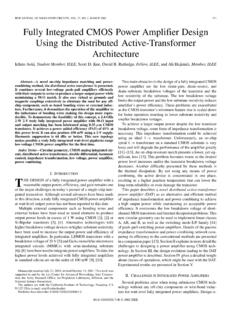 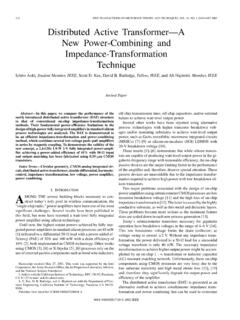 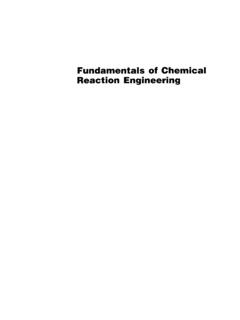 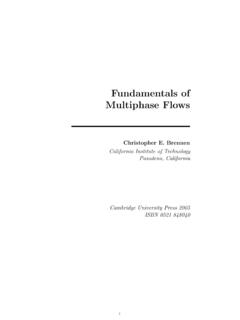 have worked on multiphase ﬂow problems with a group of ... from my earlier book entitled “Cavitation and Bubble Dynamics” by ... 12.5 SINGLE DROPLET MECHANICS 299 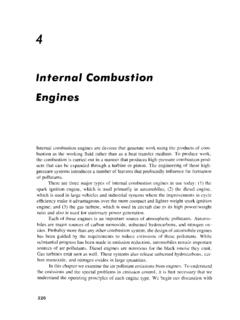 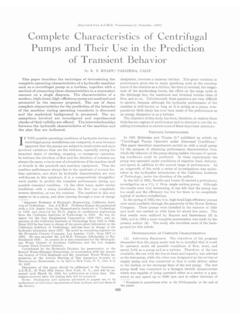 Complete Characteristics. of Centrifugal Pumps and Their Use in the Prediction of Transient Behavior BY R. T. KNAPP,1 ... paper describes the technique of determining the complete operating characteristics of a hydraulic machine such as a centrifugal pump or a turbine, together with a ... 2 PosiTIVE-RoTATION HEAD-DISCHARGE CURvEs (B ... 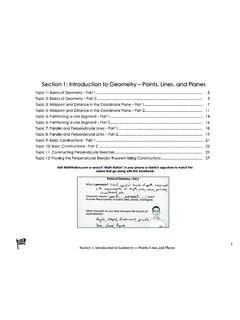 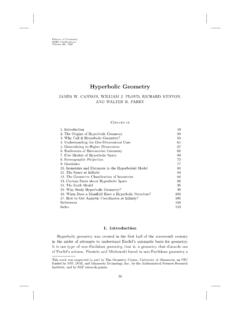 HYPERBOLIC GEOMETRY 63 We shall consider in this exposition ve of the most famous of the analytic models of hyperbolic geometry. Three are conformal models associated with the 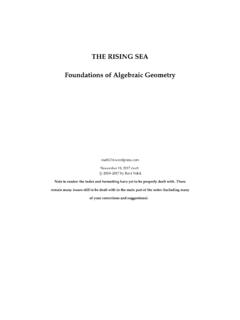 THE RISING SEA Foundations of Algebraic Geometry math216.wordpress.com November 18, 2017 draft ⃝c 2010–2017 by Ravi Vakil. Note to reader: the index and formatting have yet to be properly dealt with. 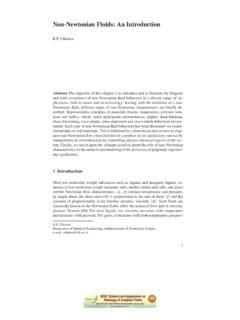 Non-Newtonian Fluids: An Introduction R.P. Chhabra Abstract The objective of this chapter is to introduce and to illustrate the frequent and wide occurrence of non-Newtonian ﬂuid behaviour in a diverse range of ap- 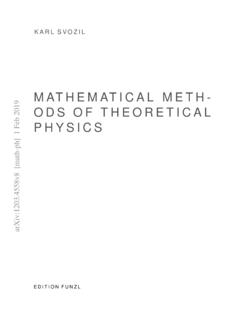