105th Church Anniversary and Homecoming You Can Come Home Again . BETHLEHEM Isaiah 49:19-20. BAPTIST. Church . 311. NORTH. DUNBAR. PAULS. Michael Eaton, Senior Pastor VALLEY. Associate Ministers OKLAHOMA Bruce Ford T. D Rushing WELCOME HOME BETHLEHEM! Dear Bethlehem Church Family , Even the most desolate parts of your abandoned land will soon be crowded with your people. Your enemies who enslaved you will be far away. The generations born in exile will return and say, We need more room! It's crowded here!' Isaiah 49:19-20 NLT. The Bethlehem Baptist Church family in Pauls Valley are glad to have you back home this weekend at our 105th Church Anniversary and Homecoming Weekend, September 22-23, 2007. The theme is, "You Can Come Home Again! . Isaiah 49:19-20. We had a blessed time on yesterday at the picnic at Wacker Park . It was nice to meet you.

1 105th Church Anniversary and Homecoming You Can Come Home Again . BETHLEHEM Isaiah 49:19-20. BAPTIST. Church . 311. NORTH. DUNBAR. PAULS. Michael Eaton, Senior Pastor VALLEY. Associate Ministers OKLAHOMA Bruce Ford T. D Rushing WELCOME HOME BETHLEHEM! Dear Bethlehem Church Family , Even the most desolate parts of your abandoned land will soon be crowded with your people. Your enemies who enslaved you will be far away. The generations born in exile will return and say, We need more room! It's crowded here!' Isaiah 49:19-20 NLT. The Bethlehem Baptist Church family in Pauls Valley are glad to have you back home this weekend at our 105th Church Anniversary and Homecoming Weekend, September 22-23, 2007. The theme is, "You Can Come Home Again! . Isaiah 49:19-20. We had a blessed time on yesterday at the picnic at Wacker Park . It was nice to meet you.

2 On this morning, I will give you the word from the Lord. Our guest speaker at 3 o'clock will be Rev. Alvin B. Marshall of the Christland Baptist Church , Fort Worth, Texas. We are asking all members and former members to give a Church Anniversary gift of $ We love you here at Bethlehem! Remember when times get tough or you get tired of the big city, You Can Come Home Again! . Truly In Christ, Pastor Michael Eaton P AGE 2. FROM THE CHAIRMAN. Dear Bethlehem Family, Welcome home! I am happy that you took time out of your busy schedule to be with us this 105th Homecoming . This is a special weekend. The members of the committee and I would like for you to meet our new Pastor. We hope that you find comfort in knowing that we have been praying for your return. We have a rich legacy here at Bethlehem as you are a wonderful part of it. Just set back and relax and hear a word from the Lord.

3 Your Brother in Christ, Herman Jackson Homecoming & Anniversary Chairman P AGE 3. Bethlehem Baptist Church History Bethlehem Baptist Church was organized in 1902 in a dugout located on the residential lot of the Rev. Elijah Leopard in the 400 block of North Hickory Street. In 1904, another Church from the east side of town merged its membership with Bethlehem and in 1905 the first Church building was completed. Charter mem- bers of Bethlehem included Rev. & Mrs. Elijah Leopard, Mrs. Burton Davidson, Curry, Mr. Mose Johnson, Mrs. Jane Johnson, Mr. Nathan Harris, and Mrs. Janie Brown. From 1905 to 1941 the Church expanded and grew under the leadership of Rev. Leopard, Rev. Davis, Rev. Charlie Williams, Rev. , Rev. L. H. Hervey, Rev. C. H. Kennedy, Rev. H. , Rev. A. Griffin, and Rev. M. J. Johnson. In 1941, the Rev. Jones was called as pastor and under his leadership the building committee was formed with Leon Love as chairman and preparation was begun on the present edifice.

4 Rev. Jones was in- strumental in organizing the Baptist Training Union for Bethlehem. In 1947 the Rev. C. M. Franks was called and he served until 1951. In 1952, the Rev. Charles Hill became pastor. Under his leadership the sanctuary was completed and a new parsonage was built. Rev. Hill was Bethlehem's first full time pastor. He was instrumental in establishing Church records. In 1960, the Rev. Jackson was called. During his storate we began observing Annual Women's Day and Annual Youth Day. In 1961, the Church called as its leader the Rev. C. W. Whitlow. Under his leadership the Educational Build- ing was erected. In 1966, the Rev. Smith began serving as pastor. The Bus Ministry has its origin during his time of leadership. In 1972, the Rev. Davis was called. During his pastorate, central air conditioning was extended to the Educational Building.

5 1981, the Rev. Johnson began serving as pastor. During his pastorate the Bethlehem family would have a prayer breakfast every 1st Sunday. The annual days were combined and we began celebrating All Auxil- iary Day, the first black owned daycare was established, two vans were purchased, and improvements made in the Educational Building and the Sanctuary. Memorial Stained glass windows were added to the Sanctu- ary. In 1986 a new Baptistery was installed. In 1987 we were blessed to purchase the Dunbar property. In July of 1996, Bethlehem called the Rev. C. R. Leslie Jr. During his pastorate the Children's Church Min- istry was established. P AGE 4. History Continue .. In April of 2000, Bethlehem called the Rev. Lee A. Benson. After much prayer, The Lord blessed us in June of 2003, by sending Rev. Harold Brewer. Under his leadership, God blessed Bethlehem to make tremendous strides both spiritually and materially.

7 Six young men who were members of Bethlehem have been called into the ministry. They are Rev. Leroy Pe- ters, Gregory Jones, Harvey Jackson, Charles Dawson, Dwayne Cudjoe, Herman Stevenson and Bruce Ford. Serving as Trustees in the past were Robert Curry, Tom Ross, Clifton Fields, Fred Love, Victor Jackson, Jesse Fields, Quinen Ross and Theola Jackson. Present Trustees are Isom Davis, Al Jackson, Audrey Jones, and Her- man Jackson. Music plays a vital part in helping to spread the word of God. Serving Bethlehem as musicians through the years were Octavia McNeal Todd, Elsberry, Althea Dorn, Lynn Willis, Velah Ross, Isom Davis, Nancy Kerr, Lori Ford and Tommie Sampson. Serving at present is Tommie Sampson. Yes, Bethlehem is marching we've passed over the roads that led us here. We've pitched our tents on land near turbulent waters but the leaders who have waited in the camp have caught the gleam of a new day, and have each in their turn brought us into greater and more secure avenues of success.

10 268-0151. Michael Eaton, is a native of Dallas, Texas and the only son of the late Mr. Floyd G. Harper and youngest of two children of Mrs. Lula M. Thomas of Colorado Springs, Colorado. He is married to Kimberly and they are blessed with two daughters, Kimberly and Christal. His home Church , Concord Baptist Church , Dallas, Texas, has a membership of over five thousand mem- bers. The late Dr. E. K. Bailey was his pastor and father in the ministry. The Rev. Bryan L. Carter is now his pastor and successor of Dr. E. K. Bailey. Pastor Eaton served as the Singles Pastor of the Concord Mis- sionary Baptist Church in Dallas, Texas. Pastor Eaton has also worked five years in the Singles Ministry of Oak Cliff Bible Fellowship under the leadership of Dr. Tony Evans. Pastor Eaton served as the Senior Pastor of the Holiday Hills Baptist Church in Abilene, Texas.

The “Why” and “How” of Church Security

DOES YOUR CHURCH REALLY NEED A SECURITY TEAM: The “Why” and “How” of Church Security . Thirty percent of all churches experienced a …

Security, Church, And how of church security 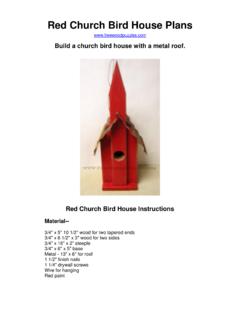 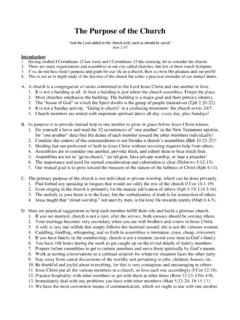 The Purpose of the Church - Let God be True

The Purpose of the Church “And the Lord added to the church daily such as should be saved.” Acts 2:47 Introduction: 1. Having studied I Corinthians 12 last week and I Corinthians 13 this morning, let us consider the church.

Purpose, Church, The purpose of the church

Baptist Handbook For Church Members By M. L. Moser, Jr. It is a distinct principle with Baptists that they acknowledge no human founder, recognize no human

Weekly Newsletter July 22, 2018 Order of Worship Greeting myself believe in God, if it were not for the cross …. In the real world Song Leader

Greetings From The Pastor - Welcome to Southern …

2 Greetings From The Pastor To God be the glory for the great things he continues to do. It is with great pleasure that I present to you our first Congregational