2 (Independent Charge) for Coal & Power, Shri Piyush Goyal and MoS (Finance), Shri Santosh Kumar Gangwar. It was also attended by the Governor and Deputy Governor of Reserve Bank of india , all Secretaries of the Ministry of Finance and senior officials from the PMO. The Meeting took stock of the current status of supply of cash and took certain decisions to further activate the dispensing of cash through the networks of Banking Correspondents, Post Offices, ATMs, Banks and E-payment systems. Following decisions were also taken keeping in view the convenience of the public. Banking Correspondents (BCs) Network : 1. Banks will increase the cash holding limit of BCs to at least ,000/- each. Banks will also allow higher limits in appropriate cases. 2. Banks will replenish the cash with BCs multiple times in a day as per requirement of the BCs. BCs have wide presence in the rural areas. Totally there are lakh BCs in the country. The above decisions will facilitate wider reach in the rural areas for exchange and withdrawal of cash from Bank Accounts.

3 Postal Network : 3. There are about lakh Branch Post Offices in the country. It has been decided to enhance the supply of cash to Branch Post Offices to facilitate cash withdrawals from Postal Accounts. It may be noted that with lakh BCs and lakh branch Post Offices getting further activated, a total number of lakh points in rural areas will be available to disburse cash and facilitate cash withdrawals from Bank Accounts. ATM Network : 4. To expedite the process of recalibration of ATMs, a Task Force is being set up under Deputy Governor, RBI consisting of representatives of Banks and Finance Ministry. This Task Force will draw up action plan and ensure implementation of this action plan for quick recalibration of the ATMs to enable them to dispense new Bank notes of and 5. In the meantime, Micro ATMs will be deployed to dispense cash against Debit/Credit cards up to the cash limits applicable for ATMs. The handheld Micro ATMs have the facility of mobility and deployment at the required places.

4 Network and Reach of the Banks : 6. The withdrawal limit of ,000/- per week has been enhanced to ,000/-. The withdrawal limit of ,000/- per day has been removed. 7. The limit of for over the counter exchange against old and notes has been increased to This will enable the Banks to give lower denomination notes for while dispensing the remaining through notes. 8. The ATMs are progressively getting recalibrated. As and when they are recalibrated, the cash limit of such ATMs will stand enhanced to per withdrawal. This will enable dispensing of lower denomination currency notes for about per withdrawal. Other ATMs which are yet to be recalibrated, will continue to dispense till they are recalibrated. 9. Business entities having Current Accounts which are operational for last three months or more will be allowed to draw ,000/-per week. This can be done in a single transaction or multiple transactions. This will enable the small business entities to pay wages to their workers and make sundry payments.

5 10. Adequate cash will be made available with District Central Cooperative Banks (DCCBs) to facilitate withdrawal from existing accounts. The cash withdrawal limits for Banks will apply in case of DCCBs also. The above measures would substantially enhance the reach of the banking system to exchange notes and facilitate cash withdrawal from bank accounts. E-Payments : 11. All Central government Departments and Public Sector Enterprises are being instructed to use the method of e-payments to the maximum extent possible. 12. RBI has advised National Payments Corporation of india (NPCI) to waive its transaction charges on transactions settled through National Financial Switch(NFS) till 31st December, 2016. 13. Banks are also being advised to waive similar charges currently levied by them. Arrangements for public convenience : 14. Banks have been advised to arrange separate queues in their branches for senior citizens and divyang persons; customers for transactions against accounts held with the Bank; and exchange of notes.

6 There will, therefore be, three or more separate queues in every branch. 15. Pensioners are required to submit Annual Life Certificate during the month of November. This time limit has been extended up to 15th January, 2017. 16. The existing exemptions for acceptance of old and notes for certain types of transactions are being extended beyond 14th November, 2016. midnight up to 24th November, 2016 mid night. There is enough cash in the system to meet the requirement. Members of the public are, therefore, advised not to have any sense of panic. **. DSM. 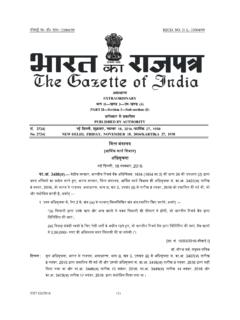 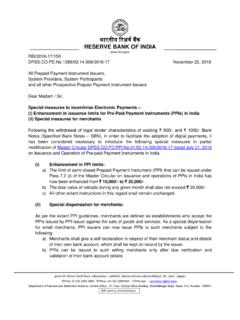 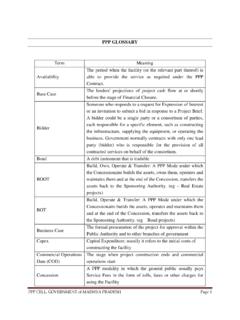 PPP CELL, GOVERNMENT of MADHYA PRADESH Page 3 current value, and so calculate its NPV Due Diligence Review and evaluation of … 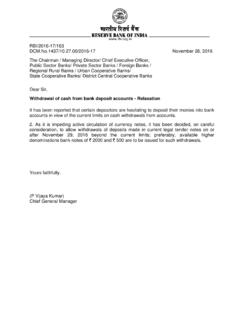 Farmers Suicide and Response of the Government … 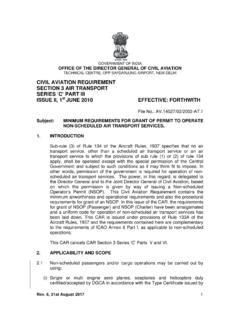 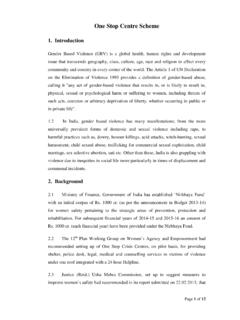 Page 1 of 12 One Stop Centre Scheme 1. Introduction Gender Based Violence (GBV) is a global health, human rights and development issue that transcends geography, class, culture, age, race and religion to affect every 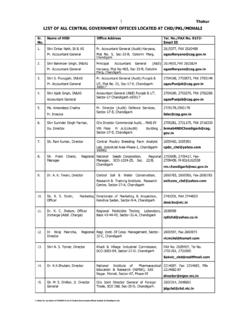 1 Thakur LIST OF ALL CENTRAL GOVERNMENT OFFICES LOCATED AT CHD/PKL/MOHALI Sr. Name of HOD Office Address Tel. No./FAX No. 0172- No. … 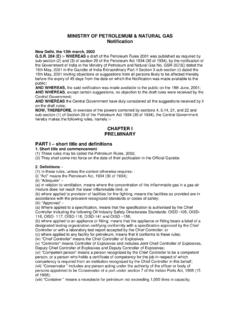 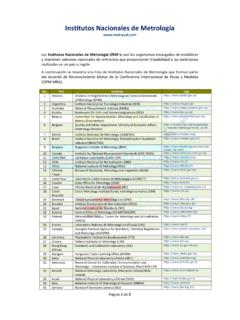 WHO/PSM/QSM/2006.2 (Previous version: WHO/EDM/QSM/2004.4) ENGLISH ONLY INDEX OF PHARMACOPOEIAS The Index of Pharmacopoeias has been circulated to national pharmacopoeia commissions for their feedback and the data