2 Management of gastroparesis should include assessment and correction of nutritional state, relief of symptoms, improvement of gastric emptying and, in diabetics, glycemic control. Patient nutritional state should be managed by oral dietary modifications. If oral intake is not adequate, then enteral nutrition via jejunostomy tube needs to be considered. Parenteral nutrition is rarely required when hydration and nutritional state cannot be maintained. Medical treatment entails use of prokinetic and antiemetic therapies. Current approved treatment options, including metoclopramide and gastric electrical stimulation (GES, approved on a humanitarian device exemption), do not adequately address clinical need.

3 Antiemetics have not been specifically tested in gastroparesis, but they may relieve nausea and vomiting. Other medications aimed at symptom relief include unapproved medications or off-label indications, and include domperidone, erythromycin (primarily over a short term), and centrally acting antidepressants used as symptom modulators. GES may relieve symptoms, including weekly vomiting frequency, and the need for nutritional supplementation, based on open-label studies. Second-line approaches include venting gastrostomy or feeding jejunostomy; intrapyloric botulinum toxin injection was not effective in randomized controlled trials.

4 Most of these treatments are based on open-label treatment trials and small numbers. Partial gastrectomy and pyloroplasty should be used rarely, only in carefully selected patients. Attention should be given to the development of new effective therapies for symptomatic control. Am J Gastroenterol 2013; 108:18 37; ; published online 13 November 2012. This clinical guideline addresses the definition, diagnosis, differ- the trade-offs. The quality of evidence could range from high . ential diagnosis, and treatment of gastroparesis, including nutri- (implying that further research was unlikely to change the authors'.)

6 Summary will be presented in the first table. A search of OVID. Medline, Pubmed, and ISI Web of Science was conducted for the years from 1960 to 2011 using the following major search terms DEFINITION OF GASTROPARESIS SYNDROME AND. and subheadings including gastroparesis, electrical stimulation, GASTROPARESIS SYMPTOMS. botulinum toxin, drug therapy, glycemic control, dietary Recommendations therapy, and alternative therapy . We used systematic reviews and 1. The diagnosis of gastroparesis is based on the combination of meta-analyses for each topic when available, followed by a review symptoms of gastroparesis, absence of gastric outlet obstruc- of clinical trials.

7 Tion or ulceration, and delay in gastric emptying. (Strong rec- The GRADE system was used to evaluate the strength of the ommendation, high level of evidence). recommendations and the overall quality of evidence (1) (Table 1). 2. Accelerated gastric emptying and functional dyspepsia can The strength of a recommendation was graded as strong when present with symptoms similar to those of gastroparesis; there- the desirable effects of an intervention clearly outweigh the unde- fore, documentation of delayed gastric emptying is recom- sirable effects and as conditional when there is uncertainty about mended before selecting therapy with prokinetics agents or 1.

9 Gastric electrical stimulation (GES). (Strong recommendation, Table 1. Criteria for assigning grade of evidence moderate level of evidence). Type of evidence Summary of Evidence. Gastroparesis is defined as a syndrome Randomized trial=high of objectively delayed gastric emptying in the absence of me- Observational study=low chanical obstruction and cardinal symptoms including early sa- Any other evidence=very low tiety, postprandial fullness, nausea, vomiting, bloating, and upper Decrease grade if: abdominal pain (2); the same constellation of complaints may be seen with other etiologies, including gastritis secondary to Heli- Serious ( 1) or very serious ( 2) limitation to study quality cobacter pylori infection, peptic ulcer, and functional dyspepsia.

10 Important inconsistency ( 1). Symptoms have not been well correlated with gastric emptying. Some ( 1) or major ( 2) uncertainty about directness Nausea, vomiting, early satiety, and postprandial fullness correlate Imprecise or sparse data ( 1). better with delayed gastric emptying than upper abdominal pain High probability of reporting bias ( 1). and bloating (3,4). The epidemiology and impact of gastroparesis are reviewed elsewhere (2). In summary, although a high preva- Increase grade if: lence of gastroparesis has been reported in type 1 diabetics (40%) Strong evidence of association significant relative risk of > 2 ( < ).

ACG and CAG Clinical Guideline: Management of Dyspepsia © 2017 by the American College of Gastroenterology The American Journal of GASTROENTEROLOGY 3 Table 2 . PICO statements evaluated in the dyspepsia guideline 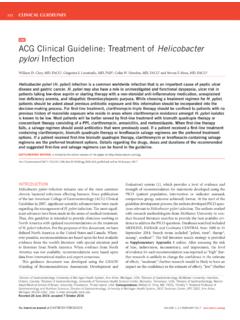 Treatment of The American Journal of GASTROENTEROLOGY ...

ACG Clinical Guideline: The Diagnosis and …

1 AMERICAN COLLEGE OF GASTROENTEROLOGY ACG Clinical Guidelines In the latter half of 2014, ACG published five clinical guidelines and more are planned for … 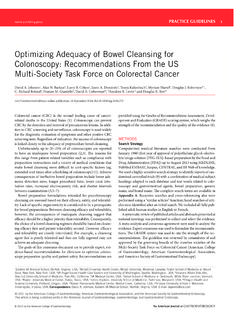 Optimizing Adequacy of Bowel Cleansing for …

Guidelines for Diagnosis, Treatment, and …

Guidelines for the Diagnosis and Management of ... 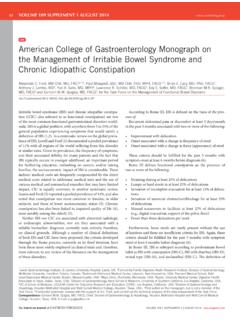 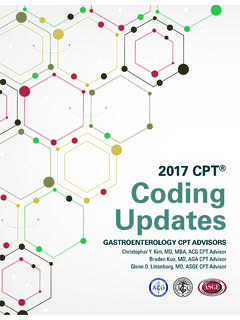 ESPEN guidelines on nutritional support for … 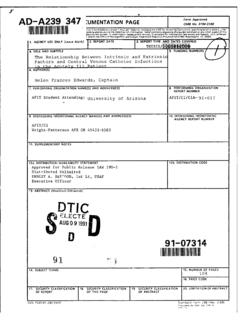 The Relationship Between Intrinsic and Extrinsic …