2008-2013 Action Plan for the Global Strategy for the Prevention and Control of Noncommunicable Diseases Working in partnership to prevent and control the 4 noncommunicable diseases — cardiovascular diseases, diabetes, cancers and chronic

4 Dotted lines on maps represent approximate border lines for which there may not yet be full agreement. The mention of specific companies or of certain manufacturers' products does not imply that they are endorsed or recommended by the World Health Organization in preference to others of a similar nature that are not mentioned. Errors and omissions excepted, the names of proprietary products are distinguished by initial capital letters. All reasonable precautions have been taken by the World Health Organization to verify the information contained in this publication. However, the published material is being distributed without warranty of any kind, either expressed or implied. The responsibility for the interpretation and use of the material lies with the reader. In no event shall the World Health Organization be liable for damages arising from its use. Printed by the WHO Document Production Services, Geneva, Switzerland Design and layout: FABRICA (Namyoung An).

6 We have an Action Plan to avert millions of premature deaths and help promote a better quality of life for millions more.. TACKLING THE WORLD'S BIGGEST KILLERS AND ADDRESSING. KEY CHALLENGES TO Global DEVELOPMENT IN THE 21st CENTURY. Today, noncommunicable diseases (NCDs), mainly Working closely with Member States, WHO has, cardiovascular diseases, cancers, chronic respiratory therefore, developed this Action Plan to prevent NCDs diseases and diabetes represent a leading threat to human from occurring and to help the millions who are already health and development. These four diseases are the affected to cope with these lifelong illnesses. This world's biggest killers, causing an estimated 35 million Action Plan, endorsed at the Sixty-first World Health deaths each year - 60% of all deaths globally - with 80% Assembly in May 2008, is based on the sound vision of in low- and middle-income countries. the Global Strategy for the prevention and control of noncommunicable Diseases, endorsed at the Fifty-third These diseases are preventable.

7 Up to 80% of heart World Health Assembly in May 2000. It also aims to build disease , stroke, and type 2 diabetes and over a third of on the WHO Framework Convention on Tobacco control cancers could be prevented by eliminating shared risk and the WHO Global Strategy on Diet, Physical Activity factors, mainly tobacco use, unhealthy diet, physical and Health. The Action Plan provides Member States, inactivity and the harmful use of alcohol. WHO, and the international community with a roadmap Unless addressed, the mortality and disease burden from to establish and strengthen initiatives for the surveillance, these health problems will continue to increase. WHO prevention and management of NCDs. projects that, globally, NCD deaths will increase by 17% Furthermore, the Action Plan highlights the pressing over the next ten years. The greatest increase will be seen need to invest in NCD prevention as an integral part of in the African region (27%) and the Eastern Mediterranean sustainable socioeconomic development.

8 NCD prevention region (25%). The highest absolute number of deaths will is an all-government responsibility. Considerably more occur in the Western Pacific and South-East Asia regions. gains can be achieved by influencing policies of non-health We have the right vision and knowledge to address sectors than by health policies alone. All stakeholders will these problems. Proven cost-effective strategies exist need to intensify and harmonize their efforts to avert these to prevent and control this growing burden. However, preventable conditions and to save millions from suffering high-level commitment and concrete Action are often needlessly and dying prematurely. missing at the national level. NCD prevention and Dr Ala Alwan control programmes remain dramatically under-funded Assistant Director-General at the national and Global levels and have been left off noncommunicable Diseases and Mental Health the Global development agenda.

9 Despite impacting World Health Organization the poorest people in low-income parts of the world and imposing a heavy burden on socioeconomic development, NCD prevention is currently absent from the Millennium Development Goals. However, in all low- and middle-income countries and by any measure, NCDs account for a large enough share of the disease burden of the poor to merit a serious policy response. 05. 2008-2013 Action Plan The Global Response to Address noncommunicable Diseases Global Strategy for the prevention and 2000 control of noncommunicable Diseases WHO Framework Convention 2003 on Tobacco control Global Strategy on Diet, 2004 Physical Activity and Health Resolution on prevention and 2007 control of noncommunicable diseases: implementation of the Global Strategy WHO Report on the Global Tobacco Epidemic, 2008 - The MPOWER Package 2008. Resolution on Strategies to reduce the harmful use of alcohol Medium-term Strategic Plan 2008-2013 .

10 2008-2013 Action Plan for the Global Strategy for the prevention and control of noncommunicable Diseases 06. Introduction Introduction This document is written primarily for the community - to strengthen health care for people with of international development partners, as well as those noncommunicable diseases by developing norms and in government and civil society concerned with urgent guidelines for cost-effective interventions, with priority Action to address the rapidly increasing burden of given to cardiovascular diseases, cancers, chronic noncommunicable diseases (NCDs) in low - and middle - respiratory diseases and diabetes. income countries and its serious implications for poverty reduction and economic development. Further, the Global Strategy sets out the roles of the main players in the struggle against noncommunicable This document: diseases, namely: Member States, the Secretariat and - makes the case for urgent Action between 2008-2013 international partners. 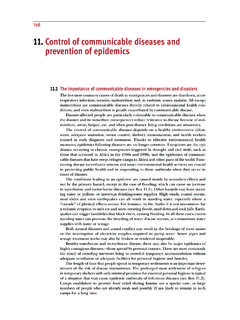 11. Control of communicable diseases and …

Prevention and Control of Communicable Diseases …

Prevention and Control of Communicable Diseases A Guide for School Administrators, Nurses, Teachers, Child Care Providers, and Parents or Guardians