the uniform interstate depositions and discovery act by david c. marshall 2 table of contents the act.....3

4 Similar legislation is pending in Rhode Island, Connecticut, and 1 Rhode Island introduced a bill to enact the UIDDA on March 4, 2014 , but the senate committee on judiciary recommended that the measure be held for further study and therefore the bill is still pending. 2013 Bill Tracking RI 2587. A bill was introduced in Connecticut in 2012 and 2013 to adopt the UIDDA, but it has not passed yet. See 2012 Bill Text CT 5331 (Feb. 27, 2012); See also 2013 Bill Text CT 6584 (March 6, 2013). The Wisconsin Judicial Council planned to file a petition and memorandum proposing a Supreme Court rule change in 2013, but Wisconsin Supreme Court has yet to adopt the UIDDA.

5 Minutes of the Meeting of the Wisconsin Judicial Council November 15, 2013, THE UNIFORM INTERSTATE DEPOSITIONS AND DISCOVERY ACT BY DAVID C. MARSHALL 4 GENERAL PROCEDURE FOR ISSUING A SUBPOENA UNDER THE UIDDA Under the Uniform Interstate Depositions and Discovery Act, the procedure for issuing a foreign subpoena to a state that has adopted the Act is: 1. A party must submit a foreign subpoena to a clerk of court in the county, district, court or parish in where discovery is sought. 2. The clerk, in accordance with the court s procedures, will issue a subpoena for service on the person to which the foreign subpoena is directed.

6 A. The subpoena issued by the clerk must: i. Incorporate the terms used in the foreign subpoena; and ii. Contain or be accompanied by the name, addresses, and telephone numbers of all counsel of record to which the subpoena relates and of any party not represented by counsel. 3. The subpoena must be served according to applicable rules or statutes of the state where the subpoena is being served. 4. Applicable state law governs compliance with subpoenas to give testimony, produce documents, and permit inspection of premises. 5. Any application to the court for protective order, or to enforce, quash, or modify a subpoena must comply with applicable state law and rules and be submitted to the court where the discovery is sought.

7 THE UNIFORM INTERSTATE DEPOSITIONS AND DISCOVERY ACT BY DAVID C. MARSHALL 5 In a comment to the UIDDA, the National Conference of Commissioners on Uniform State Laws explained the envisioned standard procedure for requesting subpoenas under the act: The committee envisions the standard procedure under this section will become as follows, using as an example a case filed in Kansas (the trial state) where the witness to be deposed lives in Florida (the discovery state): A lawyer of record for a party in the action pending in Kansas will issue a subpoena in Kansas (the same way lawyers in Kansas routinely issue subpoenas in pending actions).

9 In addition, the lawyer might prepare a short transmittal letter to accompany the Kansas subpoena, advising the clerk that the Florida subpoena is being sought pursuant to Florida statute ___ (citing the appropriate statute or rule and quoting Sec. 3). The clerk of court, upon being given the Kansas subpoena, will then issue the identical Florida subpoena ( issue includes signing, stamping, and assigning a case or docket number). The process server (or other agent of the party) will pay any necessary filing fees, and then serve the Florida subpoena on the deponent in accordance with Florida law (which includes any applicable local rules). 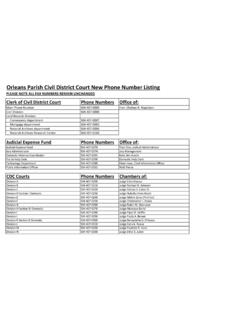 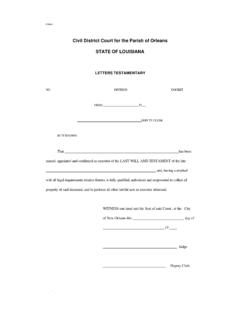 Civil District Court for the Parish of Orleans STATE …

form 86 state of louisiana civil district court for the parish of orleans notice to sell movable or immovable property at private sale no. 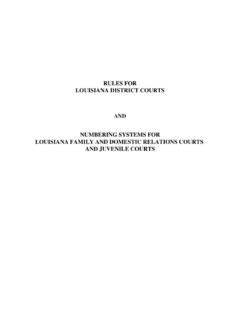 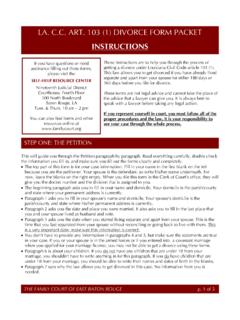 The paragraph after is a summary of everything you’re asking the court to do. It also deals with the costs of coming to court for this divorce. 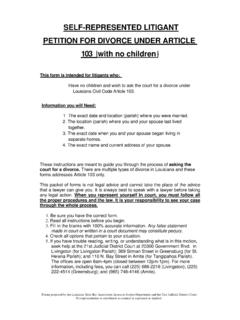 SELF-REPRESENTED LITIGANT PETITION FOR DIVORCE UNDER ARTICLE 103 with no children This form is intended for litigants who: Have no children and wish to ask the court for a divorce under

Court, Self, Litigant, Represented, Petition, Self represented litigant petition for 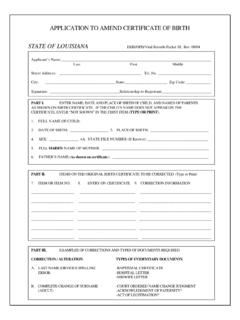 APPLICATION TO AMEND CERTIFICATE OF BIRTH …

AFFIDAVIT FOR CORRECTIONS OF GIVEN NAMES ONLY FOR CHILDREN 12 AND UNDER State of Parish/County Of Personally the undersigned appeared before me named below, who being duly 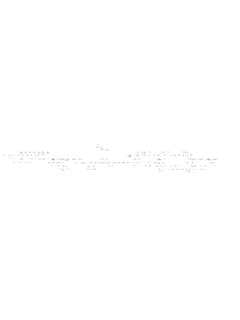