4 S&P 500 Composite 100 134 155 155 174 212. We have included the Russell 1000 Index which will eventually replace the Russell 2000 and S&P 500 Indices in our stock price performance graph because in June 2017 Teledyne graduated from the Russell 2000 Index to the Russell 1000 Index. 3. Letter to Stockholders 2017 was, by any measure, a record year. Record sales, record earnings, record operating margin, record cash flow, and Digital Imaging segment, driven by Teledyne DALSA, which achieved outstanding results. the successful acquisition and integration of We are very proud of our businesses and track Teledyne e2v, our largest acquisition to date. record, and we have truly matured as a company. Teledyne Technologies began 2018 with just over 18. Specifically, sales increased percent to $ years as an independent company with a compound billion. We also achieved record GAAP earnings per Annual shareholder return of slightly over 18 percent share of $ despite significant non-recurring for a total return of approximately 2000 percent.

5 Charges of $ associated with the acquisition of e2v and $ per share due to tax reform. Our current portfolio of businesses best represents Excluding these charges, 2017 EPS increased the original ethos of our predecessor, Teledyne, Inc., percent from last year to $ and its founder Henry Singleton. Penned in 1960, the name Teledyne means distant force or alternatively Organic revenue growth, which excludes acquisitions, power from afar. Across the globe, in deep space accelerated in each quarter of 2017, and was over and on the ocean floor, Teledyne businesses seven percent for the full year. Furthermore, every manufacture enabling technologies that provide segment achieved organic growth, but it was our power or derive information from distant environments. The Sentinel-5P satellite, launched October 2017, measures air pollution from Teledyne operates highly specialized space via Teledyne e2v detectors. Instruments from Teledyne API measure semiconductor fabrication and similar pollutants from the ground.

7 Over 34 million miles from from X-rays, ultraviolet radiation, visible light and Earth, the Curiosity Rover has been exploring Mars infrared photons. Our sonars generate and receive for the past five and a half years with its engine and acoustic signals which then, using our software, many of its eyes provided by Teledyne. produce digital maps of the ocean floor and electronic nautical navigation charts. Our test and measurement On a much smaller scale, our machine vision systems detect and digitally analyze minute changes sensors automate manufacturing, finding micron- in complex waveforms within electronic circuits. sized defects in clear glass, flat panel displays, used in consumer electronics. Our highly specialized Many of our own systems, as well as those of our microelectromechanical systems (or MEMS) help customers, require ever-more advanced analog to analyze the DNA of the human genome. digital or digital to analog converters, and Teledyne remains a leader in the highest performance Teledyne magnetrons drive powerful X-ray segment of this market.

8 In fact, in December 2017, generators in cancer radiotherapy equipment. On Teledyne e2v's Ka-band Digital-to-Analog Converter the other hand, we provide high resolution medical (or DAC) was announced the winner of Semiconductor and dental image sensors which utilize the lowest Product of the Year Analog at the Elektra Awards amount of X-rays possible. Our infrared detectors in London. and microwave devices assist national security, helping detect threats invisible to the human eye. Looking back, 2017 was a fantastic year for Teledyne. Finally, we provide power to, and data acquisition While end markets were more cooperative, years of from, systems on the ocean floor, and we send increased research and development helped generate critical flight operations data wirelessly from strong organic sales growth. Furthermore, our 2017. commercial air transport aircraft. performance also reflected difficult cost reductions in prior years, and disciplined execution to remain The original Teledyne was founded to capitalize on lean.

9 I want to express my sincere gratitude to our early semiconductor technology and the power of employees for delivering our results, our Board of digital information. While much has evolved in the Directors for their guidance and our stockholders for semiconductor industry, Teledyne has become a their continued support. Teledyne DALSA CMOS detectors provide better images NASA's James Webb Space Telescope, the successor to the at lower x-ray dose in panoramic dental radiography. Hubble Space Telescope, will use infrared detectors from Teledyne Imaging Sensors. 7. Laboratory instrumentation from Teledyne assists with life sciences research, drug discovery and pharmaceutical quality control. Finally, we were deeply saddened upon the passing of Frank V. Cahouet in June 2017. Frank served as a Director of Teledyne for 22 years, first with Dr. Henry Singleton and then continuing through April 2016. with Teledyne Technologies, including 14 years as Chairman of our Audit Committee. 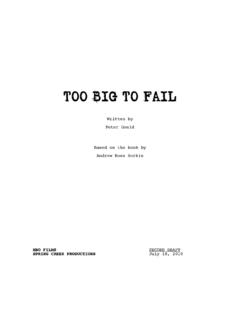 TOO BIG TO FAIL - ScreenplayStory.com

TOO BIG TO FAIL 1934 BLACK AND WHITE NEWSREEL CROWDS of DESPERATE MEN throng the streets outside the NEW YORK STOCK EXCHANGE in October, 1929. BOOMING ANNOUNCER

Fail, Too big to fail

CLASSIFICATION AND MINIMUM STANDARDS FOR FMT This publication was developed by the Foreign Medical Team Working Group under the Global Health Cluster.

Bancassurance and Indian Banks, International, TOO BIG TO FAIL