Back to title page " what 's your Excuse?". Luke 14: 16-24 , 18a All the crutches in the world aren't enough for all the LAME excuses people have! making excuses is an ancient art and universal art . as old as humanity. Gen 3. George Washington said, It is better to offer no excuse than a bad one.. Those who excel in excuses seldom exceed in anything else! BACK OF ANY EXCUSE IS A LACK OF DESIRE! There is no excuse for making excuses ! The following excuses were actually turned in by parents to one school district, in Tillamonk County, New York. The top 5 listed were: 1. Mary could not come to school because she is bothered by very close veins. 2. Please excuse Sara for being absent. She was sick and I had her shot 3. My son is under doctors care and should not take PE.

What, Your, Excuses, What s your excuse

1 Back to title page " what 's your Excuse?". Luke 14: 16-24 , 18a All the crutches in the world aren't enough for all the LAME excuses people have! making excuses is an ancient art and universal art . as old as humanity. Gen 3. George Washington said, It is better to offer no excuse than a bad one.. Those who excel in excuses seldom exceed in anything else! BACK OF ANY EXCUSE IS A LACK OF DESIRE! There is no excuse for making excuses ! The following excuses were actually turned in by parents to one school district, in Tillamonk County, New York. The top 5 listed were: 1. Mary could not come to school because she is bothered by very close veins. 2. Please excuse Sara for being absent. She was sick and I had her shot 3. My son is under doctors care and should not take PE.

2 Please execute him. 4. Please excuse Joyce from Yesterday she fell out of a tree and misplaced her hip. 5. Please excuse Jimmy for being. It was his father's fault. * In New Zealand, a woman was driving for 25 years without a driving license. She offered to the judge the following excuse: "I only drive on roads that have very little traffic, and none of those roads lead to an office where I could apply for a drivers license.". According to a UPI news item, the Metropolitan Insurance Company received some unusual excuses for accidents from its automobile policyholders. The following are just few: An invisible car came out of nowhere, struck my car, and vanished. I had been driving my car for 40 years when I fell asleep at the wheel and had the accident.

3 As I reached an intersection a hedge sprang up obscuring my vision. I pulled away from the side of the road, glanced at my mother-in-law, and headed over the embankment. The pedestrian had no idea which direction to go, so I ran over him. The telephone pole was approaching fast. I attempted to swerve out of its path when it struck my front end. * One man had a pretty good one .Pulled over by a police officer he said My wife ran off with a state policeman and when I saw your flashing lights I didn't stop because I thought you might be the trooper who is trying to bring her back ! . * A Mother filed a $10 million lawsuit against Guilford County Schools, blaming them for her son's failing physics grade. She is seeking damages because she believes school officials have hurt her son's chances of getting into Appalachian State University.

4 The story went on to say that Stephen's physics grade was out of a possible 100. That's right, ! Could a bit of studying have helped, do you think? Possibly? Nah. School's fault. One church did survey-asked two questions: How far do you live from the church? How long does it take to get there? One man was honest I live four blocks away and it takes me six months to get there.. ---Now none of us are likely to starve any time in the near future. In fact, it wouldn't hurt most of us to miss a meal or two, here and there. However, here Jesus gives us a parable about a meal that no one can afford to miss! AWESOME PROVISION THAT AWAITED. (16-17). It is a wonderful spread. Nothing is withheld. Wonderful provision awaits those who come. A. A GREAT SUPPER is DESCRIBED.

5 Make no mistake about it; this was no ordinary supper. " great." Something on the scale of an inaugural ball, or a gala at Buckingham palace, not the buffet at Shamrock! It was a special occasion-all of the stops were pulled out to make this a once in a lifetime event! When you look at some Christians you would get the impression that the Christian life was a fast, or a famine. I've got good news! When God invites you to salvation He doesn't invite you to a funeral, He invites you to a feast! B. A GREAT SALVATION is DEPICTED. In verse 15, Jesus speaks of the blessedness of the man who eats the bread of life, referring to Himself, and comes into the kingdom of God. He then proceeds to deliver this parable as an illustration of His point. The supper of salvation is prepared with a table full of everything your heart could ever desire!

6 There are dishes of forgiveness. There are trays of peace. There are bowls of joy. There are platters of love. It is a table spread with everything you could ever want. It is a table where every need of life has been provided! II. THE ABUNDANT PROBLEM THAT AFFLICTED. (18-20). In spite of the fact that a great supper had been prepared, and all of the provisions were in place, there was a problem that prevented these men from coming to the party. A. HOW THE INVITATION WAS EXTENDED Verse 17. The simplicity of this invitation is found in just one word: "Come!". The table has been set. You don't have to bring anything, just come! Not only do we see the simplicity of it, but the opportunity of it. " for all things are NOW ready.". This is a timely matter.

7 It is a matter of the utmost importance. It is a matter that must not be delayed. The invitation is to " whosoever will;" all you have to do is show up at the party ..but you must do it NOW! B. HOW THE INVITATION WAS EVADED Verse 18-20. They each made up an excuse to exempt. Make they didn't have one they made one up!!! When Examined each is Exposed! Study the specific excuses : 1. The excuse of accumulation. PURCHASED LAND. This excuse was as shallow as it was stupid! This man was either a liar or a fool. > That land was not going anywhere in fact it's still there!!! The great supper would pass, but the piece of property would still be there in the morning! A man's love for real estate is often an indication of his real state before God. 2.

8 The excuse of procrastination. PRESSING LABOR. That's like buying a car at and not driving it first! .by the way, how could he prove these oxen at night? I know dozens of people who don't have time for God because they can't squeeze God into their busy schedule. * Dr. R. G. Lee told the story about a young man in his church in Memphis he called Bob. Bob and his young family faithfully attended and faithfully served in Bellevue Baptist Church where Dr. Lee was pastor. Bob was a business genius and started a single retail store that was so successful he expanded and built other stores until he was wealthy. However, he was so busy he never had time for God any more. Dr. Lee was pretty bold, so he went to Bob's office one day and walked right passed the receptionist, and Bob's secretary into Bob's office.

9 Bob was surprised but he said, "Dr. Lee, good to see you." Dr. Lee, said, "Bob I've come by to pray for your business." Bob stammered, "Sh_sure." They got down on their knees, and Dr. Lee proceeded to pray, "Lord, I pray that you'll make Bob's business fail." That caused Bob's head to jerk up! Dr. Lee continued, "I pray that you'll take away all those other stores and just give him his original store, because You remember, Lord how much He loved You and served You back before he got too busy for You. In Jesus name, Amen.". Bob said, "Dr. Lee, I didn't really like that prayer." Dr. Lee, said, "That's okay, Bob I wasn't talking to you, anyway. See you Sunday.". That prayer got Bob's attention, and he started making God and his work a higher priority than his retail business.

10 He and his family got involved again, and instead of losing his business, it grew, but serving God became his main business. Are you using your job as an excuse for not giving God 100% of your life? 3. The excuse of infatuation PRECIOUS LADY. "I cannot come!". * Now if he had said, "I have married a wife. I will be 15 minutes late." We would have understood! Now you talk about one excuse that won't stand up! > Who ever heard of a wife who didn't like to be taken out to dinner to a fancy banquet? !? * In fact,many women are like the one I heard about TORNADO HIT. Do you realize this is the first time we've been out of the house together in five years?". No excuse for rejecting the gospel makes any sense! To turn away from the invitation of Christ is to make a unreasonable decision. 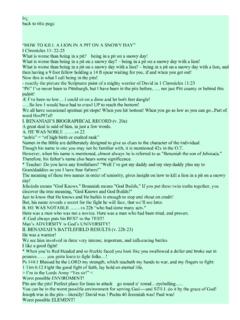 “Time of snow” In Iowa- from September to April…. 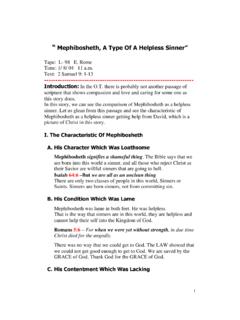 Mephibosheth, A Type Of A Helpless Sinner

2 V.5 – last phrase-the son of Ammiel, fromLo-debar. Lo-debar means a place of no pasture. It means a desolate place. Mephibosheth is a type of the sinner who has the lack of contentment and peace in their life. The reason that sinners have no peace and contentment in their life

Types, Sinners, Mephibosheth, A type of a helpless sinner, Helpless 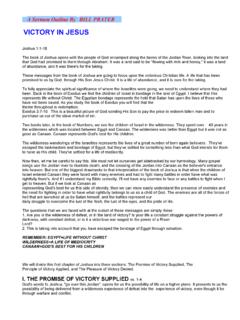 These messages from the book of Joshua are going to focus upon the victorious Christian life. A life that has been promised to us by God, through His Son Jesus Christ. “Hey, Don’t Forget To Include God In Your Plans

Your, Plan, Include, Forget, T forget to include god in your plans 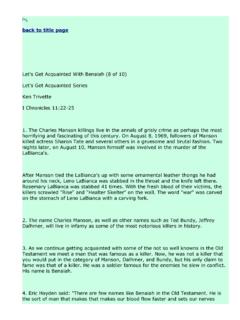 back to title page Let's Get Acquainted With Benaiah (8 of 10) ... The Moabites are symbolic of the flesh our internal enemy. The flesh is our old enemy that is related to us. It is the "old life" that opposes our "new life." ... Like the flesh, our internal enemy, Satan our infernal enemy stalks us seeking our destruction. He watches and waits ...

Title, Pages, Back, Santa, Enemy, Satan our, Back to title page