Chapter 3 Treasury Board Secretariat Section Infrastructure Planning of Infrastructure owned by the province and its Background consolidated broader-public-sector organizations was $ billion (net book value is the original cost of the asset, less accumulated depreciation, as Ontario is served by a large and diverse portfolio of reported in the Public Accounts of the province). public Infrastructure with a replacement value of Chapter 3 VFM Section (See Figure 1). (Note that energy Infrastructure close to $500 billion. The portfolio includes high- assets, such as nuclear, gas, and hydro-electric ways, bridges, transit systems, schools, universities, power plants, are excluded from Figure 1 because hospitals, drinking water and wastewater systems, they are funded by Ontario ratepayers rather parks, government buildings, and a wide variety of than the government or broader-public-sector other assets.)

1 Chapter 3 Treasury Board Secretariat Section Infrastructure Planning of Infrastructure owned by the province and its Background consolidated broader-public-sector organizations was $ billion (net book value is the original cost of the asset, less accumulated depreciation, as Ontario is served by a large and diverse portfolio of reported in the Public Accounts of the province). public Infrastructure with a replacement value of Chapter 3 VFM Section (See Figure 1). (Note that energy Infrastructure close to $500 billion. The portfolio includes high- assets, such as nuclear, gas, and hydro-electric ways, bridges, transit systems, schools, universities, power plants, are excluded from Figure 1 because hospitals, drinking water and wastewater systems, they are funded by Ontario ratepayers rather parks, government buildings, and a wide variety of than the government or broader-public-sector other assets.)

2 Organizations). The Ontario government oversees about 40%. In addition to the assets it owns directly, the of these assets either directly or through broader- province provides Infrastructure funding through public-sector organizations such as hospitals, transfer payments to municipalities, universities, school boards and colleges. In the fiscal year social-service organizations and long-term-care ended March 31, 2015, the total net book value Figure1: Portfolio of Public Infrastructure Owned by the Province as Reported in Public Accounts Sources of data: Treasury Board Secretariat and Public Accounts 2014/15. Value Sector ($ billion). Transportation Metrolinx: GO Transit has 3,250 kilometres (km) of routes (450km train, 2,800km bus) serving 7 million passengers in an area of 11,000 square km 17,000 kilometres of provincial highways and 2,900 bridges Health 148 hospitals on 229 sites Schools 5,000 schools with more than 26 million square metres of space and million students Colleges 24 colleges with 140 campuses and almost 200,000 full-time students Other 980,000 acres of land 5,700 buildings including offices, courthouses, correctional facilities and OPP detachments Total 282.

3 Infrastructure Planning 283. homes. These recipients are responsible for plan - over 50% of both hospitals and schools are at least ning and managing their Infrastructure to meet 40 years old. their needs. The province released two long-term infrastruc- ture plans in the past decade to outline the direc- tion it wanted ministries and government agencies Infrastructure Plans and to follow for Infrastructure renewal and expansion: Spending ReNew Ontario , 2005 identified the transpor- Much of Ontario 's current stock of Infrastructure tation, health and education sectors, among was built between the end of the Second World War others, as needing investment, and commit- and the 1970s in response to wartime shortages and ted to invest $30 billion between 2005 and the post-war baby boom. Infrastructure spending 2010, including approximately $5 billion for slowed over the period between 1980 and 2005 as health care projects, more than $10 billion government priorities shifted during difficult eco- to improve school and postsecondary facili- nomic conditions.

4 Ties, and about $ billion to highways and Infrastructure investments picked up again in transit projects. This plan was completed in the last 10 years, but Ontario is still managing an 2008-2009 a year ahead of schedule. Projects aging asset portfolio. An overview of the age of committed under this plan include, the York . major assets in the province is shown in Figure 2. Spadina subway extension in Toronto, the The average age of the province's hospitals is 45 Windsor Detroit Gateway, and new hospitals years while that of schools is 38 years. Additionally, and schools. Chapter 3 VFM Section Figure 2: Age Distribution of Major Categories of Infrastructure Assets Sources of data: Ministries of Education, Health and Long-Term Care, and Transportation 35. 30. Hospitals 25 Schools Provincial bridges 20. 15. 10. 5. 0. 0 10 11 20 21 30 31 40 41 50 50+.

5 Age of Asset Note: The age of provincial highways (pavements) average only seven years and have therefore not been presented in the graph. 284 2015 Annual Report of the Office of the Auditor General of Ontario Building Together Jobs & Prosperity for more than $16 billion invested in the hospital Ontarians, 2011, is a 10-year plan that set out sector, including more than 100 major hospi- the government's priorities for Infrastructure tal projects and another $2 billion for other investments and provided a framework to health-care Infrastructure such as community guide future investments. The majority of health centres and long-term-care facilities;. planned investments were concentrated in the and five ministries with the biggest capital spend- $ billion to build 700 new schools and ing (Transportation; Health and Long-Term make major additions and renovations to Care; Education; Northern Development and more than 725 existing schools.)

6 Mines; and Training, Colleges and Universi- The province has provided an average of about ties). Investments consisted of a large number $3 billion per year in Infrastructure transfer pay- of previously approved projects and programs. ments over the last 10 years to organizations such Priorities identified in the plan included: as municipalities, universities, social service agen- expanding and rehabilitating highways, cies, and long-term-care homes. Figure 3 highlights bridges, border crossings, and other trans- the province's Infrastructure spending in the last 10. portation Infrastructure ; years. improving and expanding transit for Figure 4 shows the estimated planned spending commuters; for the next 10 years. This includes: investing in elementary, secondary and $55 billion to transportation for priority pro- post-secondary educational Infrastructure ; jects such as public transit, roads, bridges and Chapter 3 VFM Section investing in hospital expansions and highways.

7 Redevelopments; and $27 billion to health care;. supporting investments in rural $21 billion to education (schools and post- communities. secondary institutions); and $21 billion in other (including some capital funding to municipalities). Infrastructure Spending Planned capital funding to municipalities totals In the last 10 years, Ontario 's largest Infrastructure almost $ billion, allocated as follows: health investments have been in the transportation sec- care, $ billion; roads and bridges, $ billion;. tor, followed by health and education. During schools, $500 million; transit, $4 billion; and other, this period, the province devoted 77% of its total $ billion. Infrastructure spending which includes preserv- Over the last ten years, the province has received ing existing assets, expansion of existing assets, $6 billion from the federal government through and construction of new facilities to these three a variety of Infrastructure initiatives, and will be sectors alone.

8 Undertaking negotiations with the newly elected Over the last decade, major investments in the federal government to jointly fund future projects various sectors have included: and programs. more than $20 billion for transit projects, including $ billion for GO Transit and $ billion for transit in Toronto, Ottawa, and 1. 2 Infrastructure Planning Waterloo; Ontario 's Treasury Board Secretariat (Secretariat). $ billion to design, repair or build nearly is the central agency responsible for co-ordinating, 8,000 kilometres of roads and 950 bridges; Planning , analyzing, and providing recommenda- tions to the government regarding the province's Figure 3: Actual Infrastructure Spending by Sector, 2006 2015 ($ billion). Source of data: Treasury Board Secretariat Sector 2005/06 2006/07 2007/08 2008/09 2009/10 2010/11 2011/12 2012/13 2013/14 2014/15 Total Transit Highways, Roads and Bridges Hospitals and Other Health Care Schools and Postsecondary (Colleges, Universities).

9 Other (including some capital funding for municipalities*). Stimulus Funding Total * Municipal Infrastructure spending is also included in the various sectors. Figure 4: Planned Infrastructure Spending by Sector, 2016 2025 ($ billion). Source of data: Treasury Board Secretariat Sector 2015/16 2016/17 2017/18 2018/19 2019/20 2020/21 2021/22 2022/23 2023/24 2024/25 Total Transit Highways, Roads and Bridges Hospitals and Other Health Care Schools and Postsecondary (Colleges and Universities). Other (including some capital funding for municipalities*). Total * Planned funding for municipal Infrastructure totals almost $ billion, allocated as follows: health-care, $ billion; roads and bridges, $ billion; schools, $500 million; transit, $4 billion; and other, $ billion Infrastructure Planning 285. Chapter 3 VFM Section 286 2015 Annual Report of the Office of the Auditor General of Ontario Infrastructure investments on assets owned by the any changes to previously approved program or Province, and broader-public-sector organizations.

10 Project funding. It also makes recommendations on capital transfers A ministry's submission incorporates the fund- to the various recipients. The Secretariat's respon- ing requests the ministry has received from the sibilities include: broader-public-sector entities that it oversees. After co-ordinating Infrastructure Planning across it has reviewed and analysed the requests, the the provincial government; Ministry of Education, for example, includes in its providing fiscal, economic and policy analy- overall submission a province-wide analysis of the sis to support the Infrastructure - Planning renewal needs and major capital needs of all school process; boards. The Secretariat analyzes the ministries'. providing capital-expenditure information to overall funding requests and makes recommenda- the Ministry of Finance for inclusion in the tions to the Treasury Board/Management Board provincial Budget; and of Cabinet (Treasury Board), which issues final monitoring capital expenditures. 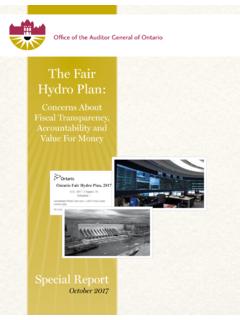 Of ce of the Auditor General of Ontario Special Report October 2017 The Fair Hydro Plan: Concerns About Fiscal Transparency, Accountability and 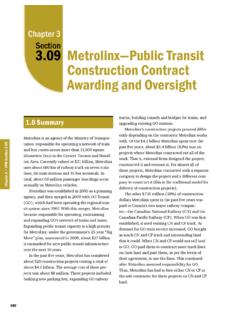 2 • Prior to starting the main refurbishment work on the four reactors in 2016, OPG started 18 prerequisite projects at a total cost expected to exceed $725 million, or 75% more than its initial estimate. The main causes for the expected cost overrun include a lack of detailed planning and understanding of the work’s

Annual Report 2017 of the Office of the Auditor … 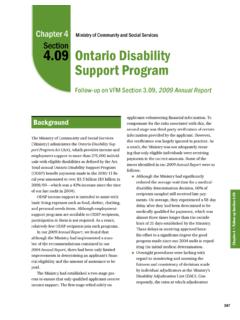 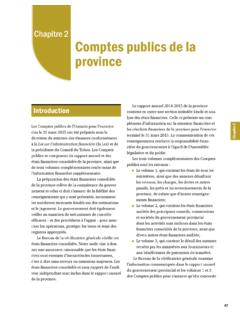 Chapter 4 Ministry of Community and Social … 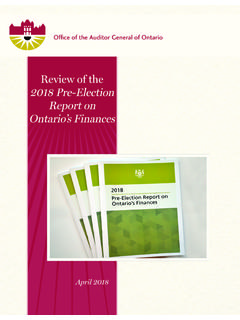 Review of the 2018 Pre-Election Report on Ontario's … 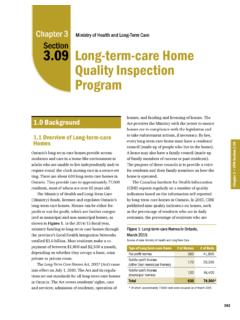 Long-term-care Home Quality Inspection Program 365 SdhWf H Whcb in the homes, and interview a sample of residents, their family members and/or staff members who 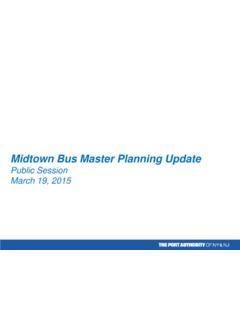 Mar 19, 2015 · Midtown Bus Master Planning Update • Planning team has been at work for a year and a half. • Addresses trans-Hudson buses today and into 2040. 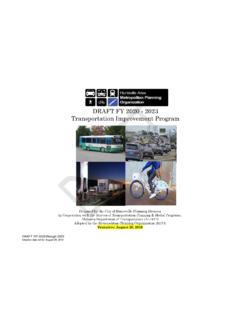 Indiana’s STIP is four-year fiscally constrained planning document (see Appendix A) that lists all projects expected to be Federally funded in years 2018, 2019, 2020, and 2021, as well as State 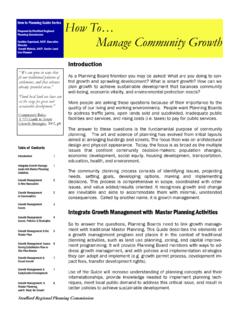 How to Planning Guide Series How To… Manage …

Strafford Regional Planning Commission Page 4 “Planners must remind themselves—and their constituencies— to reach beyond the hot topics of the moment to understand, long-range, how to manage community growth and

Guide, Series, Planning, How to planning guide series how

www.worldwatch.org Green Economy and Green Jobs in China 5 O ver the past decade, and especially during the 11th Five-Year period of 2006–10, China has prioritized

A-2 • Governor Gretchen Whitmer In addition to the state’s crumbling roads, an immediate need for improved water infrastructure must be addressed in order to keep our residents healthy and our state safe from threats of contaminants.