3 Sion right, hip extension left, decline push-up, and trol of the lumbopelvic-hip complex has to 44% MVIC for the lower rectus abdominis, 14%. sitting march right) and 2 traditional abdominal been shown to decrease the risk of knee to 73% MVIC for the external oblique, and 16% to exercises (crunch and bent-knee sit-up) on activat- 47% MVIC for the internal oblique. The lowest EMG injuries, especially in ,37 Zazulak ing core (lumbopelvic hip complex) musculature. signals were consistently found in the sitting march et al37 reported that female athletes with t BACKGROUND: Numerous Swiss ball ab- right exercise. Latissimus dorsi EMG signals were less trunk control had a higher risk of dominal exercises are employed for core Muscle greatest in the pike, knee-up, skier, hip extension strengthening During training and rehabilitation, right and left, and decline push-up (17%-25%.

4 Knee injuries, especially anterior cruciate but there are minimal data to substantiate the MVIC), and least with the sitting march right, ligament injuries, compared to athletes ability of these exercises to recruit core muscles. crunch, and bent-knee sit-up exercises (7%-8% who exhibited greater trunk control. It is also unknown how core Muscle recruitment MVIC). Rectus femoris EMG signal was greatest The use of Swiss ball training for core in many of these Swiss ball exercises compares to with the hip extension left exercise (35% MVIC), Muscle development has been popular core Muscle recruitment in traditional abdominal and least with the crunch, roll-out, hip extension exercises such as the crunch and bent-knee sit-up.

5 For several Multiple studies have right, and decline push-up exercises (6%-10%. examined core Muscle recruitment dur- t METHODS: A convenience sample of 18 MVIC). Lumbar paraspinal EMG signal was relative subjects performed 5 repetitions for each exercise. low (less than 10% MVIC) for all exercises. ing varying types of Swiss ball abdominal Electromyographic (EMG) data were recorded on t CONCLUSIONS: The roll-out and pike were exercises8,28,35,36 and During traditional the right side for upper and lower rectus abdomi- the most effective exercises in activating upper abdominal exercises like the crunch nis, external and internal oblique, latissimus dorsi, and lower rectus abdominis, external and internal (abdominal curl-up)

10 Respect to core Muscle recruitment. Understanding which core muscles tension right, and hip extension left. Dur- are recruited and how active they are mal body fat for their age group, in accor- ing these exercises, the subject assumed while performing a variety of Swiss ball dance with standards set by the American a prone, neutral spine and pelvis push- and traditional abdominal exercises is College of Sports Medicine. 3 Baseline up position (hips, knees, elbows, and helpful to therapists and other healthcare skin fold calipers (model 68900; Country neck flexed approximately 0 , shoulders or fitness specialists who develop specific Technology, Inc, Gays Mill, WI) and ap- flexed approximately 90 , feet together, abdominal exercises for their patients or propriate regression equations were used and hands shoulder width apart), with clients to facilitate their rehabilitation or to assess percent body fat. 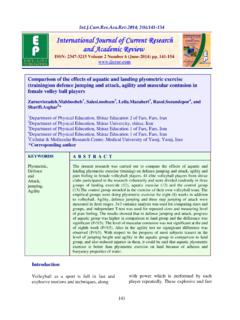 144 Because of injuries caused by these exercises,the researchers decided to do the exercise in water to prevent injuries, and to find the best method for practice. 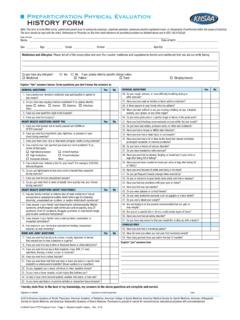 Preparticipation Physical Evaluation HISTORY FORM. Note: This form is to be filled out by p. at. ient and parent prior to seeing the. physician, physician assistant, advanced practice registered nurse, or chiropractor (if performed within the scope of practice) 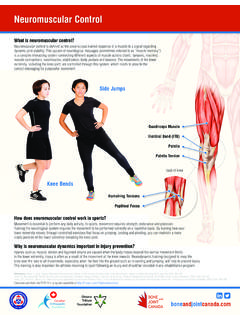 Preparticipation Physical Evaluation HISTORY FORM (Note: This form is to be ﬁlled out by the patient and parent prior to seeing the physician. 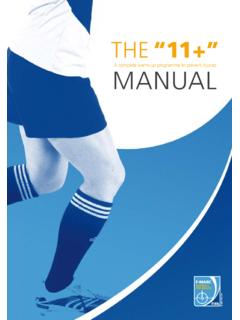 4 physical exercise is the best preven - tive measure for many diseases – this is a scientifically proven fact. Major scientific studies have shown football 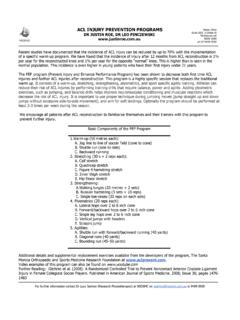