crop establishment 5. crop establishment Leigh Jenkins, NSW DPI. Pre-sowing Successful crop establishment is crucial to achieve maximum potential yield. Timeliness of sowing is the management most important factor followed by an evenly established and uniform plant stand. Canola has a small seed and Soil preparation should ideally be sown into good moisture at an even and To ensure good seed to soil contact, place the seed into a shallow depth. seedbed that is firm, level and moist near the surface. Avoid Successful establishment is linked to crop profitability sowing into loose or fluffy' soil.

1 crop establishment 5. crop establishment Leigh Jenkins, NSW DPI. Pre-sowing Successful crop establishment is crucial to achieve maximum potential yield. Timeliness of sowing is the management most important factor followed by an evenly established and uniform plant stand. Canola has a small seed and Soil preparation should ideally be sown into good moisture at an even and To ensure good seed to soil contact, place the seed into a shallow depth. seedbed that is firm, level and moist near the surface. Avoid Successful establishment is linked to crop profitability sowing into loose or fluffy' soil.

2 If adequate seed soil contact through: does not occur, the small canola seed cannot absorb enough n higher yields, from quick and uniformly emerging moisture from the loose drying soil, resulting in a reduced and/or seedlings; staggered germination (often occurring over six weeks). Heavy n maximum yields are achieved from crops which have at stubble cover on the surface can reduce emergence and early least 90 per cent ground cover prior to bud appearance; vigour. However, some surface cover is desirable to prevent n improving the ability of canola to withstand insect attack wind and water erosion and sand blasting on sandy soils.

3 And compete with weeds in the first six weeks; Like wheat, canola will benefit from stored subsoil n even growth and maturity, allowing timely in-crop moisture, particularly in marginal cropping areas, where management decisions such as weed control, fertiliser winter and spring rainfall is unreliable. Manage fallows applications and insect control; and efficiently to maximise the amount of moisture at sowing. n more even ripening improving the timing of windrowing Generally, pre-sowing operations for dryland crops should and harvest. be finalised by the end of March or early April in low-rainfall A uniformly established crop is the foundation for a potential high yield.

5 It is usually measured by germination through to temperate in southern and central NSW to a percentage but seedling vigour is equally important. summer dominant rainfall pattern in northern NSW. Under quality assurance (QA) schemes, seed companies supply seed which has been tested for germination and Sowing equipment purity. Seed crops are generally produced under irrigation or Canola can be established successfully using a wide variety in high-rainfall zones to maximise seed size and quality. They of seeders, from those suited to cultivated seedbeds through are grown in isolation from other canola crops to minimise to full no-till implements.

6 Tined or disc seeders can be used, genetic drift and guarantee genetic purity. depending on factors such as the farming system, soil types, Minimum guaranteed standards for canola seed include: stubble loads, and the grower's personal preferences. n minimum germination percentage of 85 per cent;. Attention to weed control during the preceding crop n minimum purity of per cent;. rotation is needed to provide weed-free and problem-free n first generation seed;. sowing. Substituting cultivations before sowing with one n tested free of wild radish and other noxious weed seeds.

7 Or more knockdown herbicides enables better moisture and retention and sowing with minimum soil disturbance. n tested free of sclerotes (carrier of sclerotinia stem rot). Seed source and purity can have a negative impact on Stubble management subsequent canola crops if seed is retained and grown over Stubble retention plays a significant role in most modern a number of years. Canola is a crop which self-pollinates cropping systems, with many benefits including reduced and outcrosses. As a result of out-crossing of individual risk of erosion, maintaining organic matter, increased water plants with different characteristics, the characteristics of a infiltration and reduced evaporation.

8 Variety can drift' slightly from one generation to the next. In the lower rainfall areas of Victoria and South Australia, In most instances, the characteristics for which the variety stubble retention appears to have few negative impacts where was originally selected tend to regress and the undesirable stubble loads are less than 4 t/ha. However, in the higher characteristics tend to become more prominent. rainfall areas of southern NSW and Victoria, stubble loads of Varieties that possess the Clearfield trait of herbicide 7 10 t/ha can cause physical problems during sowing, as tolerance are also subject to this process of genetic drift'.

9 Low summer rainfall limits stubble decomposition. Research which means there is no guarantee that farmer-retained has consistently demonstrated that increasing stubble loads Clearfield varieties will demonstrate the same level of (particularly over the seed row), can reduce emergence, plant herbicide tolerance as displayed by quality-assured seed. establishment , growth and, in some instances, yield. On average, a 5 t/ha stubble can reduce emergence by 25 per Use of grower-retained seed cent and plant establishment by 33 per cent. The use of farmer-grown seed is not recommended as it When sowing into stubble, ensure that stubble is pushed increases the potential for establishment failure and reduced away from the sowing row (into the inter-row spaces) to yield and oil content.

10 Studies in Australia and Canada have reduce the problems causing poor early crop growth but still shown that germination and vigour can be reduced from maintaining the benefits of stubble cover. seed harvested and retained by growers of commercial 22 Canola best practice management guide crop establishment Certified seed is your guarantee of quality. Photo: D. McCaffery, NSW DPI. crops not grown specifically for seed. Recent studies in trade in PBR protected varieties are illegal, and penalties for Canada have also shown that farmer-saved hybrid seed infringements are significant. 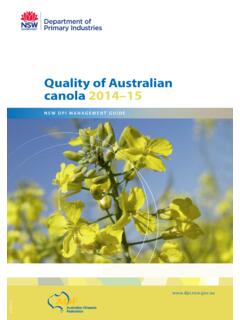 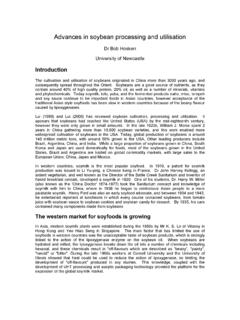 Advances in soybean processing and utilisation

Advances in soybean processing and utilisation Dr Bob Hosken University of Newcastle Introduction The cultivation and utilisation of soybeans originated in China more than 3000 years ago, and 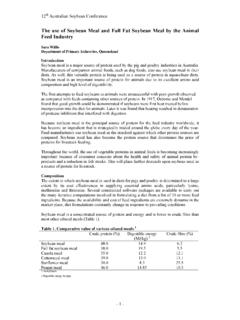 Benefits, Corps, Cover, Till, Wheat, Stubble, Benefits of cover crops in no till wheat stubble 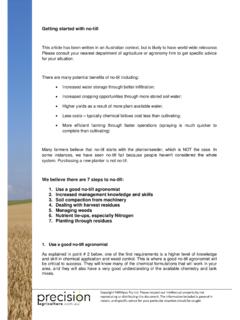 Getting started with no-till - Precision Agriculture

Copyright FARMpos Pty Ltd. Please respect our intellectual property by not reproducing or distributing this document. The information included is general in

With, Getting, Till, Started, Getting started with no till

Benefits of Cover Crops in No-till Wheat Stubble, Getting started with no-till