psat 8 /9.. Practice Test 1. #. Make time to take the Practice test. It is one of the best ways to get ready for the psat 8 /9. After you have taken the Practice test, score it right away with the scoring guide at 5 LRS01. Test begins on the next page. 1 1. Reading Test 55 M I NU TES, 4 2 QUESTIONS. Turn to Section 1 of your answer sheet to answer the questions in this section. Each passage or pair of passages below is followed by a number of questions. After reading each passage or pair, choose the best answer to each question based on what is stated or implied in the passage or passages and in any accompanying graphics (such as a table or graph).

1 psat 8 /9.. Practice Test 1. #. Make time to take the Practice test. It is one of the best ways to get ready for the psat 8 /9. After you have taken the Practice test, score it right away with the scoring guide at 5 LRS01. Test begins on the next page. 1 1. Reading Test 55 M I NU TES, 4 2 QUESTIONS. Turn to Section 1 of your answer sheet to answer the questions in this section. Each passage or pair of passages below is followed by a number of questions. After reading each passage or pair, choose the best answer to each question based on what is stated or implied in the passage or passages and in any accompanying graphics (such as a table or graph).

2 Questions 1-8 are based on the following passage. and her knee and she is limping. Parviz holds her .. This passage is adapted from the story The Flowers of under the arm. He takes out his handkerchief and Shiraz by Goli Taraghi. 2013 by Goli Taraghi. Translation ties it around her knee. The Flowers of Shiraz smirk 2013 by Sara Khalili. The passage is set in Tehran, Iran, in 30 and snicker out of spite and jealousy. Parviz's bicycle 1953. The Flowers of Shiraz is a teenage dance group. is large. We put Gol-Maryam behind him. She is Gol-Maryam is the schoolmate of the other young clumsy and shy and doesn't know what to do with characters in the passage.

3 Her hands. She is holding her legs out and away from the back wheel and she won't sit tight against Parviz. Finally, with fear and foreboding, she agrees. She 35 I'm sure they will fall. We set off. I hear Gol-Maryam says she will come early and leave early. scream, but I don't look back. We speed down the Maybe I'll come with my father, she says. incline of Baghe Ferdows. Parviz overtakes everyone. Line Forget it! Are you nuts? Your dad on a bicycle? Gol-Maryam, her eyes wide with fear and her mouth 5 With us? . open and ready to scream, is staring straight ahead. She laughs and hangs up. 40 She has wrapped her arms tight around Parviz's Wednesday afternoon, right on time, she arrives waist.

4 The wind is blowing through her hair and at Zafaranieh Street with her chauffeur Javad Agha. under her skirt. The Flowers of Shiraz are still She doesn't have a bicycle. She dismisses Javad Agha smirking. The narrow alley and back roads of Elahieh 10 and stands next to me like someone who has never are filled with pleasant shadows. We stop in front of seen a street, a car, or creatures with two legs. She is 45 Amini Garden. There is a wide stream that flows at afraid of crossing the street, she screams and grabs the foot of the garden walls and under the trees. The hold of the back of my bicycle. Our group consists of water is cool and clear.

5 It comes from Mrs. a few classmates, two of the Flowers of Shiraz (so far, Fakhrodolleh's reservoir. We take off our shoes, put 15 all girls), two of my cousins (boys), and two of the our feet in the stream, and wash our face and hands. neighborhood guys (Homayoun and Parviz). 50 Gol-Maryam's face is flushed and she's panting. She Gol-Maryam feels out of place. She regrets having pats some water on her face and then she, too, takes come, but she has no way back. She is happier with off her shoes and dips her feet in the stream. her father. The jokes, the pranks, the screaming and The Flowers of Shiraz splash water on each other and 20 shouting, and everything we talk about is new to her.

6 Chase after one another. It is a pleasant game on such She doesn't understand our language. Worst of all, 55 a hot day. Gol-Maryam hides behind a huge tree. she doesn't have a bicycle. She climbs up behind me. I think she will start crying any minute now. But no. She fidgets. She's scared and wants to get off. At the She hops from behind one tree to the next and corner, she jumps off before I have time to stop. She splashes water on Parviz and laughs. 25 loses her balance and falls. We stop. The cousins start We ride out to Rumi Bridge and turn back. We grumbling. Gol-Maryam has scratches on her hands 60 make plans to go to Tajrish Bridge on Friday night.

7 Unauthorized copying or reuse of any part of this page is illegal. 2 CO NTI N U E. 1 1.. 1 4. Which choice best describes a main theme of the According to the passage, The Flowers of Shiraz passage? mock Gol-Maryam because A) Courage emerges when close friends are near. A) she does not know how to swim. B) Trust is the basis upon which friendships are B) they resent and envy her. built. C) she does not have a bicycle. C) It is easier for one to choose what is comfortable D) they dislike her family. instead of what the majority wants. D) Facing one's fears leads to new and meaningful experiences. 5. As used in line 37, overtakes most nearly means 2 A) frightens.

8 The author includes the conversation in lines 1-6 B) passes. ( Finally .. hangs up ) most likely to C) surprises. A) create a tense mood by showing that D) tricks. Gol-Maryam's decisions are in contrast to her father's advice. B) set the scene by revealing that Gol-Maryam is 6. not comfortable with what she is about to do. As used in line 38, eyes wide with fear most C) lay a foundation for the plot by explaining why strongly suggests that Gol-Maryam Gol-Maryam is uneasy around other people. A) is worried about getting in trouble with her D) introduce the setting to provide context for father. Gol-Maryam's actions. B) has a look of excitement on her face.

9 C) can see danger that others cannot. 3 D) is startled and anxious about what is happening. Which choice best supports the idea that Gol-Maryam feels out of place (line 17) when she is with her schoolmates? A) Lines 19-20 ( The jokes .. her ). B) Lines 23-24 ( At the corner .. stop ). C) Lines 25-27 ( The cousins .. limping ). D) Lines 53-55 ( The Flowers .. tree ). Unauthorized copying or reuse of any part of this page is illegal. 3 CO NTI N U E. 1 1. Questions 9-16 are based on the following .. 7. passage and supplementary material. At the end of the passage, it can reasonably be inferred that the narrator This passage is adapted from Patrick Tucker, The Over-Mediated World.

10 2007 by The World Future Society. A) is surprised by Gol-Maryam's playfulness. The average American spends more time using B) is angry that Gol-Maryam is splashing Parviz. media an iPod, computer, radio, television, C) realizes that Gol-Maryam was only pretending to etc. than in any other wakeful activity, almost nine be afraid. Line hours a day. Ubiquitous news, e-mail, and D) feels bad that the girls had misjudged 5 entertainment are facts of modern life and, not Gol-Maryam's character. surprisingly, most of us feel that convenient and consistent access to the digital world is a good thing. But what if our new connected age is actually 8 pushing us further apart, making us not more 10 informed, but less so? 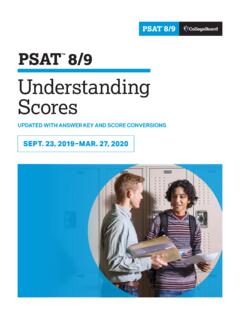 PSAT 8/9 Understanding Scores - The College Board

PSAT ™ 8/9 Understanding Scores UPDATED WITH ANSWER KEY AND SCORE CONVERSIONS . 2017-18. ... *If your state provided the assessment as part of a statewide testing initiative, use the contact information ... Take a practice test and upload their results to Score Scales and Score Changes estimate PSAT 10 or PSAT/NMSQT 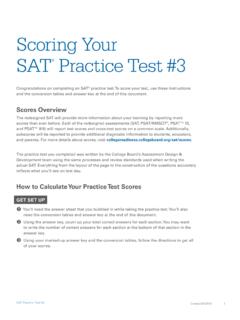 Scoring Your SAT Practice Test #3 - The College Board

SAT Practice Test #3 Created 8/4/2015 1 Scoring Your SAT ... Add your Reading Test score to your Writing and Language Test score. ... The Problem Solving and Data Analysis subscore is based on questions from the Math Test that focus on quantitative reasoning, the interpretation and synthesis of data, and solving problems ... 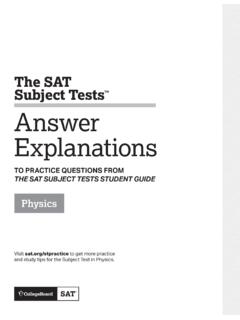 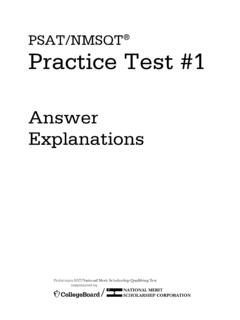 PSAT/NMSQT Practice Test #1 - The College Board

Evidence-Based Reading and Writing and the Math sections of the Practice Test. You can also refer to the test to see the information given to students about math formulas and how to record the student-produced responses. 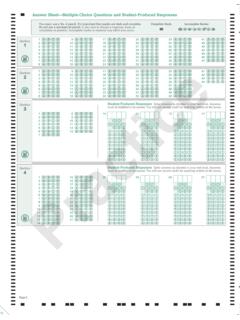 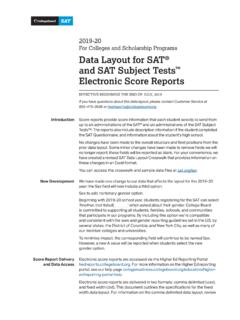 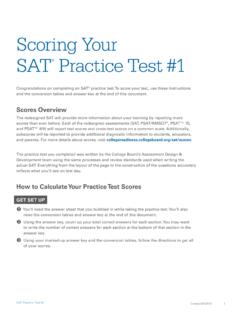 Development team using the same processes and review standards used when writing the actual SAT. ... The College Board Calculate your total score, ...

College, Writing, Board, College board 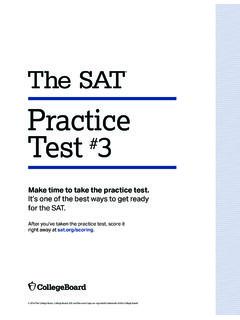 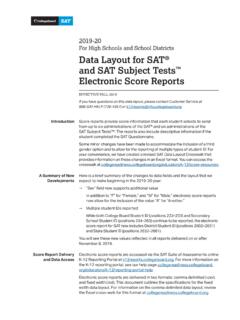 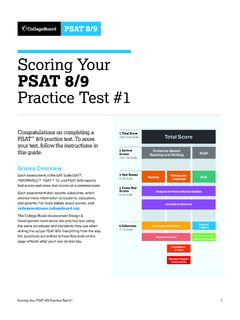 THE TEST The PSAT is a standardized test written and administered by the College Board, and cosponsored by the National Merit Scholarship Corporation. It is designed to assess students’ skills in critical reading, mathematics, and writing. Beginning in the fall of 2015, there will be three PSAT tests: the PSAT 8/9, the PSAT 10, and the PSAT/NMSQT

10 Practice Test 2 - The College Board

PSAT™ 10, and PSAT™ 8/9) will report test scores and cross-test scores on a common scale. Additionally, subscores will be reported to provide additional diagnostic information to students, educators, and parents. For more details about scores, visit collegereadiness.collegeboard.org. 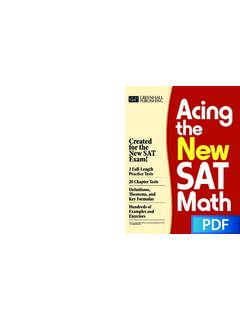 Chapter 9 Practice Test 145 Answers and Explanations 147 ... The new PSAT/NMSQT will also include the new topics, although the SAT will test for these . concepts at a higher level. The math portion of the PSAT/NMSQT will consist of two sections –

PSAT 10 Practice Test #1 Reading Test Answer Explanations Choice B is the best answer. Lines 53-55 describe how Emma felt a loss after Miss Taylor married and moved out of Emma’s home: “but it was a black morning’s work for her. The want of Miss Taylor would be felt every hour of every day.” In this context, “want” means “lack.” 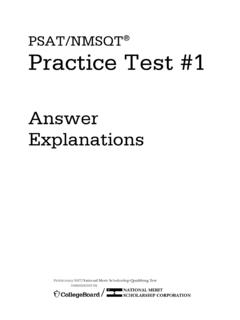 PSAT/NMSQT Practice Test #1 Reading Test Answer Explanations Choice D is the best answer because lines 74-81 refer to Emma’s new reality of “intellectual solitude” after Miss Taylor moved out of the house. Choices A, B, and C are incorrect because none of …