A Brief Guide to Questionnaire Development

introduction A Brief Guide to Questionnaire Development Robert B. Frary Office of Measurement and Research Service Virginia Polytechnic Institute and State University introduction Preliminary Considerations Writing the Questionnaire Items Open-Ended Questions Objective Questions Issues Category Proliferation. Scale Point Proliferation. Order of Categories. Combining Categories. Responses at the Scale Midpoint. Response Category Language and Logic Ranking Questions The "Apple Pie" Problem Unnecessary Questions Sensitive Questions Statistical Considerations Anonymity Nonreturns Format and Appearance Optical Mark Reader Processing of Responses Sample Size References introduction Most people have responded to so many questionnaires in their lives that they have little concern when it becomes necessary to construct one of their own. Unfortunately the results are often unsatisfactory. One reason for this outcome may be that many of the questionnaires in current use have deficiencies which are consciously or unconsciously incorporated into new questionnaires by inexperienced developers.

1 introduction A Brief Guide to Questionnaire Development Robert B. Frary Office of Measurement and Research Service Virginia Polytechnic Institute and State University introduction Preliminary Considerations Writing the Questionnaire Items Open-Ended Questions Objective Questions Issues Category Proliferation. Scale Point Proliferation. Order of Categories. Combining Categories. Responses at the Scale Midpoint. Response Category Language and Logic Ranking Questions The "Apple Pie" Problem Unnecessary Questions Sensitive Questions Statistical Considerations Anonymity Nonreturns Format and Appearance Optical Mark Reader Processing of Responses Sample Size References introduction Most people have responded to so many questionnaires in their lives that they have little concern when it becomes necessary to construct one of their own. Unfortunately the results are often unsatisfactory. One reason for this outcome may be that many of the questionnaires in current use have deficiencies which are consciously or unconsciously incorporated into new questionnaires by inexperienced developers.

2 Another likely cause is inadequate consideration of aspects of the Questionnaire process separate from the instrument itself, such as how the responses will be analyzed to answer the related research questions or how to account for nonreturns from a mailed Questionnaire . (1 of 14) [9/10/2002 10:13:30 AM]. introduction These problems are sufficiently prevalent that numerous books and journal articles have been written addressing them ( , see Dillman, 1978). Also, various educational and proprietary organizations regularly offer workshops in Questionnaire Development . Therefore, this booklet is intended to identify some of the more prevalent problems in Questionnaire Development and to suggest ways of avoiding them. This paper does not cover the Development of inventories designed to measure psychological constructs, which would require a deeper discussion of psychometric theory than is feasible here.

3 Instead, the focus will be on questionnaires designed to collect factual information and opinions. Preliminary Considerations Some questionnaires give the impression that their authors tried to think of every conceivable question that might be asked with respect to the general topic of concern. Alternatively, a committee may have incorporated all of the questions generated by its members. Stringent efforts should be made to avoid such shotgun approaches, because they tend to yield very long questionnaires often with many questions relevant to only small proportions of the sample. The result is annoyance and frustration on the part of many responders. They resent the time it takes to answer and are likely to feel their responses are unimportant if many of the questions are inapplicable. Their annoyance and frustration then causes nonreturn of mailed questionnaires and incomplete or inaccurate responses on questionnaires administered directly.

4 These difficulties can yield largely useless results. Avoiding them is relatively simple but does require some time and effort. The first step is mainly one of mental discipline. The investigator must define precisely the information desired and endeavor to write as few questions as possible to obtain it. Peripheral questions and ones to find out "something that might just be nice to know" must be avoided. The author should consult colleagues and potential consumers of the results in this process. A second step, needed for Development of all but the simplest questionnaires, is to obtain feedback from a small but representative sample of potential responders. This activity may involve no more than informal, open-ended interviews with several potential responders. However, it is better to ask such a group to criticize a preliminary version of the Questionnaire . In this case, they should first answer the questions just as if they were research subjects.

5 The purpose of these activities is to determine relevance of the questions and the extent to which there may be problems in obtaining responses. For example, it might be determined that responders are likely to be offended by a certain type of question or that a line of questions misconstrues the nature of a problem the responders encounter. The process just described should not be confused with a field trial of a tentative version of the Questionnaire . This activity also is desirable in many cases but has different purposes and should always follow the more informal review process just described. A field trial will be desirable or necessary if there is substantial uncertainty in areas such as: 1) Response rate. If a field trial of a mailed Questionnaire yields an unsatisfactory response rate, design changes or different data gathering procedures must be undertaken. 2) Question applicability. Even though approved by reviewers, some questions may prove redundant.

6 For example, everyone or nearly everyone may be in the same answer category for some questions, thus making them unnecessary. 3) Question performance. The field-trial response distributions for some questions may clearly indicate that they are defective. Also, pairs or sequences of questions may yield inconsistent responses from a number of trial responders, thus indicating the need for rewording or changing the response mode. (2 of 14) [9/10/2002 10:13:30 AM]. introduction Writing the Questionnaire Items Open-Ended Questions While these seem easy to write, in most cases they should be avoided. A major reason is variation in willingness and ability to respond in writing. Unless the sample is very homogeneous with respect to these two characteristics, response bias is likely. Open-ended questions are quite likely to suppress responses from the less literate segments of a population or from responders who are less concerned about the topic at hand.

7 A reason frequently given for using open-ended questions is the capture of unsuspected information. This reason is valid for Brief , informal questionnaires to small groups, say, ones with fewer than 50 responders. In this case, a simple listing of the responses to each question usually conveys their overall character. However, in the case of a larger sample, it is necessary to categorize the responses to each question in order to analyze them. This process is time- consuming and introduces error. It is far better to determine the prevalent categories in advance and ask the responders to select among those offered. In most cases, obscure categories applicable only to very small minorities of responders should not be included. A preliminary, open-ended Questionnaire sent to a small sample is often a good way to establish the prevalent categories in advance. Contrary to the preceding discussion, there are circumstances under which it may be better to ask the responders to fill in blanks.

8 This is the case when the responses are to be hand entered into computer data sets and when the response possibilities are very clearly limited and specific. For example, questions concerning age, state of residence, or credit- hours earned may be more easily answered by filling in blanks than by selecting among categories. If the answers are numerical, this response mode may also enhance the power of inferential statistical procedures. If handwritten answers are to be assigned to categories for analysis, flexibility in category determination becomes possible. However, if the responders are likely to be estimating their answers, it is usually better to offer response categories ( , to inquire about body weight, grade-point average, annual income, or distance to work). Objective Questions With a few exceptions, the category "Other" should be avoided as a response option, especially when it occurs at the end of a long list of fairly lengthy choices.

9 Careless responders will overlook the option they should have designated and conveniently mark the option "other." Other responders will be hairsplitters and will reject an option for some trivial reason when it really applies, also marking "other." "Other (specify)" or "other (explain)" may permit recoding these erroneous responses to the extent that the responders take the trouble to write coherent explanations, but this practice is time-consuming and probably yields no better results than the simple omission of "other." Of course, the decision not to offer the option "other" should be made only after a careful determination of the categories needed to classify nearly all of the potential responses. Then, if a few responders find that, for an item or two, there is no applicable response, little harm is done. An exception to the foregoing advice is any case in which the categories are clear-cut, few in number, and such that some responders might feel uncomfortable in the absence of an applicable response.

10 For example, if nearly all responders would unhesitatingly classify themselves as either black or white, the following item would serve well: Race: 1) Black 2) White 3) Other (3 of 14) [9/10/2002 10:13:30 AM]. introduction Also consider: Source of automobile: 1) Purchased new 2) Purchased used 3) Other "Other (specify)" should be used only when the investigator has been unable to establish the prevalent categories of response with reasonable certainty. In this case, the investigator is clearly obligated to categorize and report the "other" responses as if the question were open-ended. Often the need for "other" reflects inadequate efforts to determine the categories that should be offered. Issues Category Proliferation. A typical question is the following: Marital status: 1) Single (never married) 4) Divorced 2) Married 5) Separated 3) Widowed Unless the research in question were deeply concerned with conjugal relationships, it is inconceivable that the distinctions among all of these categories could be useful.

4 Reliability & Validity-7 Internal Consistency: Homogeneity Is a measure of how well related, but different, items all measure the same thing. Is applied to groups of items thought to measure 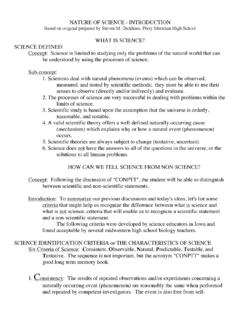 NATURE OF SCIENCE - INTRODUCTION Based on …

Based, Introduction, Sciences, Nature, Nature of science introduction based 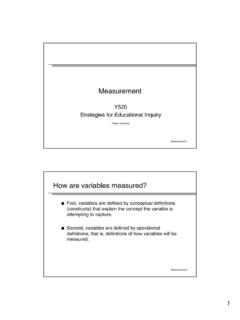 3 Measurement-5 Example: “Study effort” (c) The variable “study effort” may be said to consist of reading, looking up definitions, note-taking, drill, and self-quizzing. 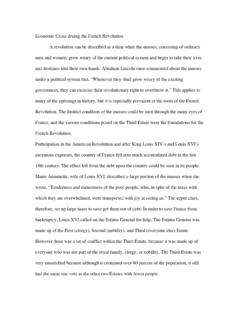 Economic Crisis druing the French Revolution . A revolution can be described as a time when the masses, consisting of ordinary men and women, grow weary of the current political system and begin to take their lives

Attitudes Towards Group Work 3 With this proliferation of group work in schools there has been a great deal of research regarding the beneficial impacts of groups on learning. 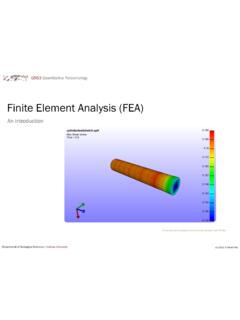 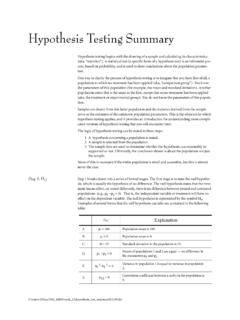 C:\rsm\y520\sec5982_fall02\week_12\hypothesis_test_summary011109.fm Hypothesis Testing Summary Hypothesis testing begins with the drawing of a sample and calculating its characteristics 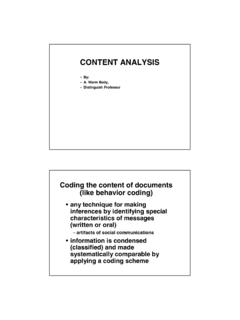 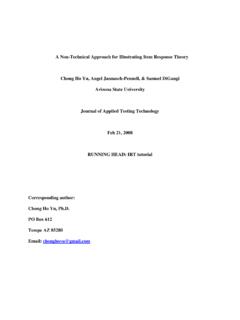 A Non-Technical Approach for Illustrating Item …

IRT tutorial 3 A non-technical approach for illustrating Item Response Theory Introduction Since the introduction of the No Child Left Behind Act (NCLB) in January 2001, assessment has become a predominant theme in grades K-12. 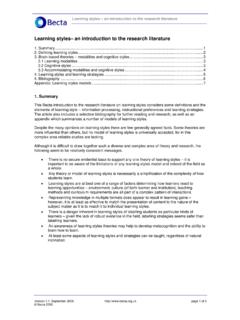 Learning styles - an introduction to the research …

Becta | Learning styles – an introduction to the research literature 3. Brain-based theories – modalities and cognitive styles Much of the learning styles theory in this area seems to be based on concepts from popular

SUGI 26: An Introduction to Computing and …

An Introduction to the Ages and Stages …

An Introduction to the Ages and Stages Questionnaires (ASQ): A Parent-Completed Child Monitoring System University of Oregon Early Intervention Program

Research Methods Knowledge Base help@atomicdogpub.com. About the Author William M.K. Trochim is a Professor in the Department of Policy Analysis and Management at Cornell University.