A brief history of medical diagnosis and the birth …

A brief history of medical diagnosis and the birth of the clinical laboratory Part 1 Ancient times through the 19th century By Darlene Berger, former MLO editor (1998-2000). Part 1 in this four-part series was originally published in July 1999. T. From tasting urine to hree distinct periods in the history of medicine are associated with three different places and, therefore, microscopy to molecular different methods of determining diagnosis : From the middle ages to the 18th century, bedside medi- testing, the sophistication of cine was prevalent; then between 1794 and 1848. came hospital medicine; and from that time forward, laboratory diagnostic techniques has medicine has served as medicine's lodestar.

Seventeenth century The medical advances of the 17th century consisted mostly of descriptive works of bodily structure and function that laid the groundwork for ...

1 A brief history of medical diagnosis and the birth of the clinical laboratory Part 1 Ancient times through the 19th century By Darlene Berger, former MLO editor (1998-2000). Part 1 in this four-part series was originally published in July 1999. T. From tasting urine to hree distinct periods in the history of medicine are associated with three different places and, therefore, microscopy to molecular different methods of determining diagnosis : From the middle ages to the 18th century, bedside medi- testing, the sophistication of cine was prevalent; then between 1794 and 1848. came hospital medicine; and from that time forward, laboratory diagnostic techniques has medicine has served as medicine's lodestar.

2 The laboratory's contribution to modern medicine has only recently been recog- come a long way and continues nized by historians as something more than the addition of another resource to medical science and is now being appreciat- to develop at breakneck speed. ed as the seat of medicine, where clinicians account for what they observe in their patients. The history of the laboratory The first medical diagnoses made by humans were based on what ancient physicians could observe with their eyes and ears, is the story of medicine's which sometimes also included the examination of human speci- mens.

3 The ancient Greeks attributed all disease to disorders of evolution from empirical to bodily fluids called humors, and during the late medieval period, doctors routinely performed uroscopy. Later, the microscope experimental techniques and revealed not only the cellular structure of human tissue, but also the organisms that cause disease. More sophisticated diagnostic proves that the clinical lab is tools and techniques such as the thermometer for measuring the true source of medical temperature and the stethoscope for measuring heart rate were not in widespread use until the end of the 19th century.

4 The clini- authority. cal laboratory would not become a standard fixture of medicine until the beginning of the 20th century. This four-part article reviews the history and development of diagnostic methods from ancient to modern times, as well as the evolution of the clinical laboratory from the late 19th century to the present. Timeline c. 1300 Uroscopy is widespread in Europe. 1592 Galileo Galilei invents the thermometer. c. 300 BC Hippocrates advo- c. 1500 Physicians 1684 Anton van Leewenhoek publishes cates examination of urine to begin using urine color the first drawings of bacteria as seen under diagnose disease.

6 Palpation and tics corresponded roughly to the four humors of the auscultation were also used. Physicians were able to human body: hot + moist = blood; hot + dry = yellow bile;. describe dysfunctions of the digestive tract, heart and circu- cold + moist = phlegm; and cold + dry = black bile. lation, the liver and spleen, and menstrual disturbances; Galen was known for explaining everything in light of unfortunately, this empiric medicine was reserved for roy- his theory and for having an explanation for everything. alty and the wealthy. He also described diabetes as diarrhea of urine and Other less-than-scientific methods of diagnosis used in noted the normal relationship between fluid intake and treating the middle and lower classes included divination urine volume.

7 His unwavering belief in his own infallibility through ritual sacrifice to predict the outcome of illness. appealed to complacency and reverence for authority. Usually a sheep would be killed before the statue of a god. Its That dogmatism essentially brought innovation and dis- liver was examined for malformations or peculiarities; the covery in European medicine to a standstill for nearly 14. shape of the lobes and the orientation of the common duct centuries. Anything relating to anatomy, physiology and were then used to predict the fate of the patient. disease was simply referred back to Galen as the final Ancient physicians also began the practice of examining authority from whom there could be no appeal.

8 Patient specimens. The oldest known test on body fluids was done on urine in ancient times (before 400 BC). Urine was Middle Ages poured on the ground and observed to see whether it attract- In medieval Europe, early Christians believed that disease ed insects. If it did, patients were diagnosed with boils. was either punishment for sin or the result of witchcraft or The ancient Greeks also saw the value in examining body possession. diagnosis was superfluous. The basic therapy fluids to predict disease. At around 300 BC, Hippocrates was prayer, penitence, and invocation of saints. Lay medi- promoted the use of the mind and senses as diagnostic tools, cine based diagnosis on symptoms, examination, pulse, pal- a principle that played a large part in his reputation as the pitation, percussion, and inspection of excreta and some- Father of Medicine.

9 The central Hippocratic doctrine of times semen. diagnosis by water casting (uroscopy) was humoral pathology attributed all disease to disorders of fluids practiced, and the urine flask became the emblem of of the body. To obtain a clear picture of disease, Hippocrates medieval medicine. By AD 900, Isaac Judaeus, a Jewish advocated a diagnostic protocol that included tasting the physician and philosopher, had devised guidelines for the patient's urine, listening to the lungs, and observing skin use of urine as a diagnostic aid; and under the Jerusalem color and other outward appearances. Beyond that, the Code of 1090, failure to examine the urine exposed a physi- physician was to understand the patient as an individual.

10 Cian to public beatings. Patients carried their urine to Hippocrates related the appearance of bubbles on the surface physicians in decorative flasks cradled in wicker baskets of urine specimens to kidney disease and chronic illness. He and, because urine could be shipped, diagnosis at long dis- also related certain urine sediments and blood and pus in tance was common. The first book detailing the color, den- urine to disease. The first description of hematuria, or the sity, quality and sediment found in urine was written presence of blood in urine, by Rufus of Ephesus surfaced at around this time, as well. 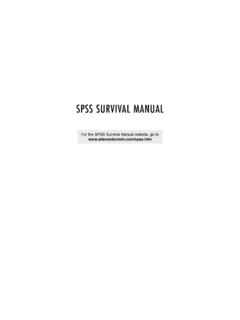 facing the horror of SPSS after signing up for a ... This is what readers from around the world say about the SPSS Survival Manual: 0905-prelims.QX5 7/12/04 4:30 PM Page ii Bookhouse . SPSS SURVIVAL MANUAL A step by step guide to data analysis using SPSS for Windows (Version 12) 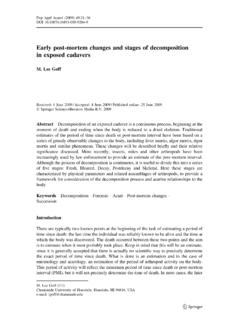 Early post-mortem changes and stages of …

point is more accurately known than the former. Individuals tend to recall when they ﬁrst encountered the dead body with considerable precision.

Chemistry 201 Qualitative Analysis Introduction General comments: It is always a good idea to use as few chemicals as possible; it makes sense