2 How The Grinch Stole Christmasb. Home Alonec. A Christmas Storyd. Bad Santa3. Bill Murray had the fortune of acting with his three brothers in the Movie Scrooged. Which of the following was not his brother?a. Brian-Doyle Murrayb. Joel Murrayc. David MurrayA Printable Trivia quiz from 1 Christmas Movie Trivia quiz - QuestionsMark with d. John Murray4. Directed by Tim Burton, the Movie The Nightmare Before Christmas was adapted from what?a. A poemb. A playc. A gamed. A TV ad5. What was the name of the famous song from the animation The Snowman?a. Do You Hear What I Hearb. Walking in the Airc. If It Doesn't Snow on Christmasd. Parade of the Wooden Soldiers6.

3 In the Movie Cast Away, Chuck's family Christmas was interrupted by needing to go on an urgent business trip. Where was he being sent?a. Thailandb. Vietnamc. Malaysiad. Indonesia7. In Elf, Will Ferrell starred in the lead role. But the role was originally intended for someone else. Who?a. Steve Carellb. Jim Carreyc. Tim Allend. Chris RockA Printable Trivia quiz from 2 Christmas Movie Trivia quiz - QuestionsMark with 8. Why was Charlie Brown feeling so depressed in A Charlie Brown Christmas ?a. Felt Christmas was being commercializedb. His friend was still in the psychiatric wardc. Felt left out of a play he'd been asked to directd. Upset that his dog had been decorating without him9.

4 In the Finnish Movie Rare Exports: A Christmas Tale, how was their Santa Claus different from the more traditional Santa?a. His sleigh is pulled by wolvesb. He's better known by his real namec. He punishes naughty childrend. He's the marketing ploy of a food company10. Santa Claus also appeared in which obscure science fiction Movie ?a. Explorersb. Zardozc. Alphavilled. Brazil11. Edward Scissorhands was set in which time period?a. The 1960sb. The 1970sc. The 1950sd. The 1980s12. Which Christmas song opened the Movie Lethal Weapon?a. Jingle Bell RockA Printable Trivia quiz from 3 Christmas Movie Trivia quiz - QuestionsMark with b. Santa Claus is Coming to Townc.

6 Which Santa-centric Movie featured the line:"All Neil told him was that Santa was more of a feeling. More of a state of mind than an actual person"a. Fred Clausb. Like Father, Like Santac. Santa Babyd. The Santa Clause18. Which best-selling Christmas toy partly inspired the Movie Jingle All the Way?a. Hot Wheelsb. Power Rangersc. Tickle Me Elmod. Bratz19. Mogwai, the cute fluffy animal in the Movie Gremlins, was a Christmas present found in which type of store?a. An antique storeb. A book storec. A delicatessend. A hardware store20. In The Muppet Christmas Carol, which character sang the song 'Chairman of the Board'?a. Lew Zealandb. Dr Bunsen Honeydewc. Sam the Eagled. 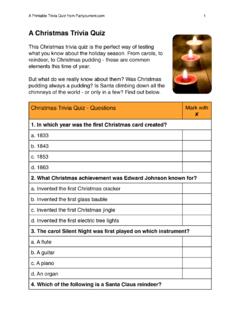 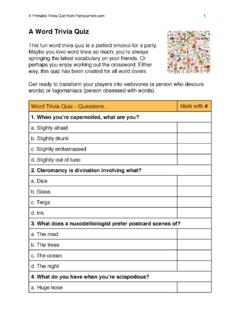 A Word Trivia Quiz This fun word trivia quiz is a perfect timeout for a party. Maybe you love word trivia so much, youʼre always springing the latest vocabulary … 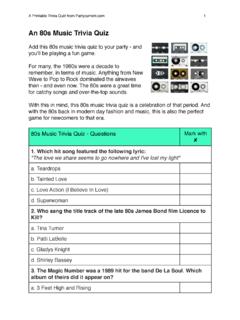 An 80s Music Trivia Quiz Add this 80s music trivia quiz to your party - and you'll be playing a fun game. For many, the 1980s were a decade to remember, in terms of music. 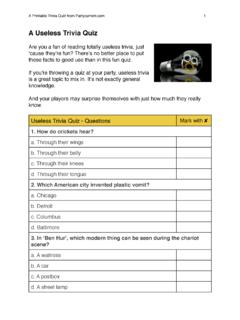 A Useless Trivia Quiz Are you a fan of reading totally useless trivia, just ʻcause theyʼre fun? Thereʼs no better place to put these facts to good use than in this fun quiz.

An Irish Trivia Quiz Test what you know about Ireland with this Irish trivia quiz. Known as the Emerald Isle, Ireland is the third largest island in Europe, and home to almost 5 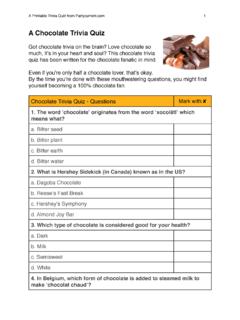 Chocolate Trivia Quiz - Questions Mark with 18. Products labelled ʻMilk Chocolateʼ in the UK are labelled as what in mainland Europe? a. Flavored Milk Chocolate

A Geography Trivia Quiz - Questions Mark with c. Russian d. Portuguese 5. What do Grenada and Costa Rica have in common? a. They have no army b… 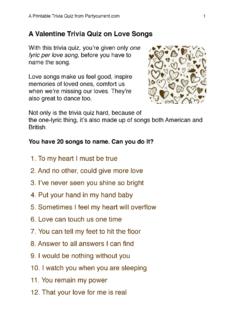 A Valentine Trivia Quiz on Love Songs With this trivia quiz, youʼre given only one lyric per love song, before you have to name the song. Love songs make us feel … 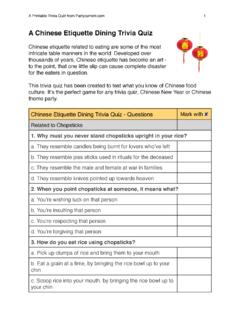 A Chinese Etiquette Dining Trivia Quiz Chinese etiquette related to eating are some of the most intricate table manners in the world. Developed over 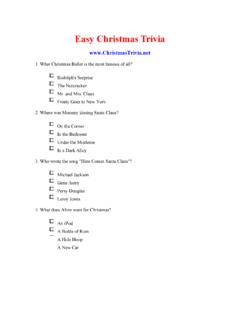 Easy Christmas Trivia www.ChristmasTrivia.net 1. What Christmas Ballet is the most famous of all? Rudolph's Surprise The Nutcracker Mr. and Mrs. Claus 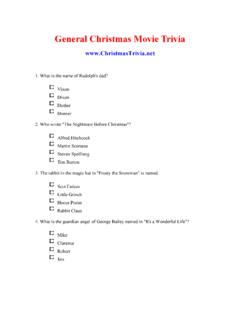 General Christmas Movie Trivia www.ChristmasTrivia.net 1. What is the name of Rudolph's dad? Vixon Dixon Dasher Donner 2. Who wrote "The Nightmare Before Christmas"? 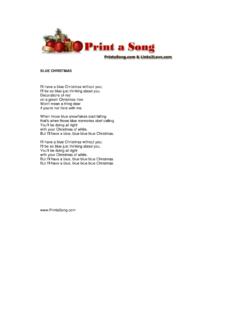 BLUE CHRISTMAS I'll have a blue Christmas without you; I'll be so blue just thinking about you. Decorations of red on a green Christmas tree 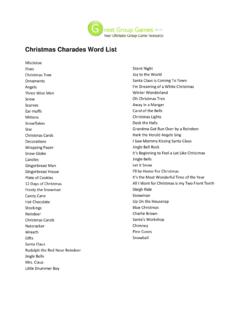 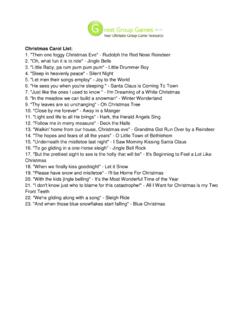 5 A Gift for Mother I've worked on her present for weeks and weeks While others were at play, For I wanted a very special gift For Mother on Christmas Day. 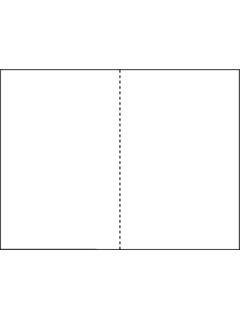