A CONCEPTUAL AND DYNAMIC APPROACH TO …

A CONCEPTUAL AND DYNAMIC APPROACH TO innovation IN tourism . by Xavier Decelle Ma tre de Conf rences, Institut de Recherches et d'Etudes Sup rieures du Tourisme (Irest). Universit Paris 1 Panth on-Sorbonne, France Abstract The importance of innovation was long underestimated in service activities. In contrast to the radical innovations vital to growth in manufacturing sectors, innovations in services and tourism were secondary and capital-scarce, and for this reason they were excluded from the scope of government interest and action. It is interesting to note that the discourse changed with the emergence of new information and communication technologies (NICT), which have been especially influential in the realm of tourism . The dissemination of new modes of production and the resulting organisational shock waves, along with the marketing adjustments this has entailed, have been the subject of much research.

1 A CONCEPTUAL AND DYNAMIC APPROACH TO innovation IN tourism . by Xavier Decelle Ma tre de Conf rences, Institut de Recherches et d'Etudes Sup rieures du Tourisme (Irest). Universit Paris 1 Panth on-Sorbonne, France Abstract The importance of innovation was long underestimated in service activities. In contrast to the radical innovations vital to growth in manufacturing sectors, innovations in services and tourism were secondary and capital-scarce, and for this reason they were excluded from the scope of government interest and action. It is interesting to note that the discourse changed with the emergence of new information and communication technologies (NICT), which have been especially influential in the realm of tourism . The dissemination of new modes of production and the resulting organisational shock waves, along with the marketing adjustments this has entailed, have been the subject of much research.

2 Yet the issues involved in innovation in tourism are not confined to the information revolution, and many other questions remain. Methodology This contribution presents a portion of a report (2002-2003) to the National tourism Board on Tourisme et innovation : bilan et perspectives ( tourism and innovation : Assessment and Outlook ). Our method has been to: Examine statements made during interviews with tourism industry leaders in the light of recent findings of theoretical work on innovation in services. Assume a context of complexity: tourism products are composite goods. Take an APPROACH that is comparative (on the industry level) and multidisciplinary (on the academic level). Take a systemic APPROACH : tourism 's territorial grounding and government intervention are core considerations. Avoid common-sense pitfalls: avoid such myths as the innate unproductiveness of service activities, inability to innovate ( Can one imagine a hotel-restaurant performing research?)

3 , low capital-intensity, inability to generate substantial productivity gains and the low quality of jobs offered by the tourism industry. Defining innovation innovation can be defined in a multiplicity of ways. The leading theoretician of innovation , Joseph Schumpeter (1883-1950), already had a broad vision of the concept, encompassing new OECD, 2004 1. products, new production processes, new markets, new raw materials and new forms of organisation. For Schumpeter, the common thread between all these changes is that they involve carrying out new combinations which are qualitatively important and introduced by DYNAMIC business leaders, or entrepreneurs . The definition generally accepted today does not necessarily entail a major change linked to a particular individual. Today, it is necessary to take account of the uncertain (risky) nature of the process, and of the need for innovation to lead to the creation of value that in the final analysis is judged by consumers.

4 A process of creating new value geared first towards customers, as the main arbiters of business competitiveness, but one that can also involve other stakeholders as major beneficiaries, such as the organisation itself (employees), shareholders (profitability), external partners, etc. 1. Newness does not necessarily suggest creation ex nihilo innovation differs from creativity. Creativity refers to the production of new ideas, new approaches and inventions, whereas innovation corresponds to the application of new and creative ideas and the implementation of inventions. From this it follows that people and organisations may be creators without being innovators. innovation represents the sum total of a joint, social process (and not the result), at the culmination of which an invention is either used or not used.

5 Inventions must be appropriated by user- adopters, which explains why the time lag is sometimes long between invention and innovation . It may involve only marginal changes. Should something be considered innovative if it is new at the level of a country, a market or even a firm? There would not seem to be a commonly accepted notion, and in particular not in the programmes of the various European States: innovation is indeed a chaotic concept ! Newness does necessarily suggest the idea of progress (technical, economic or social). innovation imposes discontinuity Schumpeter's creative destruction which, while making users of the new product or process more satisfied and the firms using it more efficient, makes existing products or production methods obsolete. It therefore creates victims or, at the very least, readily appears as a threat to certain interests.

6 The advent of superstores triggered the decline of small shops, and the development of new information and communication technologies is disrupting the world of tourism distribution. Apart from the impact on competitors, it is also necessary to factor in the spillovers for territories from innovation in tourism , and not everything new in this area necessarily advances the cause of sustainable tourism development! Newness does necessarily suggest the idea of success An innovator's behaviour cannot be likened to that of a manager who, according to traditional economic theory, is supposed to optimise current operations. Risk is a central element for an innovator, and this risk increases with uncertainty and as innovation becomes more radical. Edifying examples of successful innovations must not be the tree that hides the forest.

8 In addition, issues arising in agriculture may shed some light as well. Comparisons of the APPROACH to innovation in tourism and in other service industries: retailing, banking, recreation, etc. tourism products are experience goods par excellence, validated ex post facto by consumers, who commit their experience to memory and build upon it. This feature seems consistent with the trend towards customisation , mass production of the made-to- measure 3. In addition, tourism activity is deeply rooted spatially, the stage being set by the surrounding heritage, attractions and lodging facilities. Consumption also has a sequential dimension that affects the quality of the tourist's overall experience. As a result, reference to the model for retailing can shed light on the manner in which tourism products are distributed and consumed.

9 The tourism industry also involves activities that feature proximity to leisure industries: cultural, sporting and recreational pursuits. Since both are affected by industrialisation approaches, the development of short-term practices, the influence of innovations in urban tourism on the supply of leisure activities (casinos, museums, special events, etc.) accentuate the convergence to the point where it becomes difficult to establish a clear boundary between them. Unique features of services as compared to industrial models: marketing of services, the role of R&D, lack of patentability, attitude towards markets (tendency towards responsiveness), low degree of technology culture, etc. Services cannot be analysed exactly with the same analytical categories as are used to understand innovation in manufacturing industries.

10 Taking an evolutionist APPROACH , the taxonomy of Keith Pavitt classifies service firms, and especially those performing services for individuals, as supplier-dominated , being essentially users of technologies developed in the realm of manufacturing. The emphasis is on non-technological forms of innovation , such as professional know-how, brands and design, which then play a major role. Non-unique features: a blurry boundary between industry and services: the industrialisation of tourist services and the shock of NICT are making tourism more innovative. Services are becoming more active in innovation by adopting NICT, as highlighted by the preponderance of tourism services in the development of electronic commerce. Classifications of innovations in tourism . 2. [Translated from] Bernard Bellon (2002), L' innovation cr atrice, Economica. 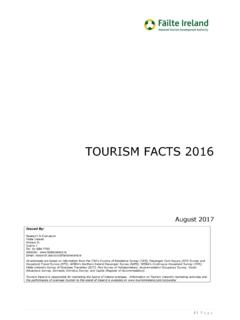 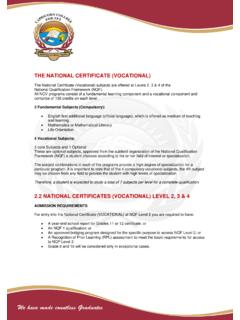 DURATION The National Certificate (Vocational) qualification is a full year program at each of the NQF Levels of study. A student is issued with a certificate on the successful completion of each level of study that is