A Manager’s Introduction to The Rational Unified …

A Manager's Introduction to The Rational Unified Process (RUP). Scott W. Ambler This version: December 4, 2005. Copyright 1999-2005 Scott W. Ambler Executive Summary Software development is a complex endeavor, one which is fraught with peril if you do not follow a proven software method. The Rational Unified Process (RUP) is one such method. The RUP takes an evolutionary approach to development which has been shown in practice to be far more effective than the traditional, serial waterfall approach which is prevalent in many organizations. This white paper overviews the lifecycle, phases, disciplines, and best practices of the RUP. It also provides suggested web-based resources which you may find useful if you are looking for more detailed information.

Executive Summary Software development is a complex endeavor, one which is fraught with peril if you do not follow a proven software method. The Rational Unified

1 A Manager's Introduction to The Rational Unified Process (RUP). Scott W. Ambler This version: December 4, 2005. Copyright 1999-2005 Scott W. Ambler Executive Summary Software development is a complex endeavor, one which is fraught with peril if you do not follow a proven software method. The Rational Unified Process (RUP) is one such method. The RUP takes an evolutionary approach to development which has been shown in practice to be far more effective than the traditional, serial waterfall approach which is prevalent in many organizations. This white paper overviews the lifecycle, phases, disciplines, and best practices of the RUP. It also provides suggested web-based resources which you may find useful if you are looking for more detailed information.

2 Although written for managers, IT practitioners will also find this paper a valuable introductory resource to the RUP. Acknowledgements I would like to thank Peter Alfvin, Rob Exley, Mark Lines, and Frank Schophuizen for their insightful feedback which I have incorporated into this paper. Table of Contents 1 Serial in the 2. The Inception 3. The Elaboration Phase .. 3. The Construction Phase .. 4. The Transition Phase .. 4. Examining the Four 5. 2 Iterative in the 6. The Business Modeling Discipline .. 6. The Requirements 7. The Analysis and Design 7. The Implementation Discipline .. 8. The Test 8. The Deployment Discipline .. 9. The Configuration and Change Management Discipline .. 9. The Project Management 10. The Environment 10.

3 Making Iterations Work in 10. 3 Delivering Incremental Releases Over 11. 4 Following Proven Best Practices .. 13. Adapt the 13. Balance Competing Stakeholder Priorities .. 13. Collaborate Across Teams .. 14. Demonstrate Value Iteratively .. 14. Elevate the Level of Abstraction .. 15. Focus Continuously on Quality .. 15. 5 Why the RUP? .. 16. 6 The RUP as a Process 17. 7 Concluding 18. The IBM Rational Unified Process (RUP) is a prescriptive, well-defined system development process, often used to develop systems based on object and/or component-based technologies. It is based on sound software engineering principles such as taking an iterative, requirements- driven, and architecture-centric approach to software development (Kruchten 2004).

4 It provides several mechanisms, such as relatively short-term iterations with well-defined goals and go/no- go decision points at the end of each phase, to provide management visibility into the development process. Figure 1 depicts the RUP lifecycle, commonly referred to as the hump chart diagram. The horizontal humps for each discipline give a rough estimate of the relative effort for each throughout the four phases. For example you can see that a large portion of Business Modeling takes place in Inception, although it does continue through to early Transition. Work on deployment usually does not start until Elaboration and doesn't really kick into high gear until the middle of Construction. The hump chart is a visual mechanism to provide a rough overview of how much each discipline is executed in each phase.

5 Figure 1. The RUP v2003 lifecycle1. 1. This diagram is Copyright 1999-2005 IBM. Copyright 1999-2005 Scott W. Ambler Page 1. IBM Rational has made, and continues to make, a significant investment in the RUP. In November 2005 IBM Rational announced that the RUP product (IBM 2004), along with Summit Ascendant (another IBM-owned software process), would evolve into Rational Method Composer (RMC). RMC is an Eclipse-based tool which enables you to define, maintain, and deploy software process related material (Kroll 2005). Although RMC now forms the software process product offering from IBM Rational going forward, RUP as a process framework will still continue. I like to characterize the RUP lifecycle as: 1. Serial in the large 2.

6 Iterative in the small 3. Delivering incremental releases over time 4. Following proven best practices. 1 Serial in the Large The RUP is structured in two dimensions: phases, which represents the four major stages that a project goes through over time, and disciplines, which represent the logical activities that take place throughout the project. The serial aspect of the RUP is captured in its phases and the iterative nature of the RUP by its disciplines. You see in Figure 1 that the four phases . Inception, Elaboration, Construction, and Transition are listed across the top of the lifecycle. Phases are the Seasons of a Project Gary Evans, of Evanetics ( ), likes to compare the phases of a RUP project to the seasons of the year.

7 For example, during Inception you'll do the same sorts of activities that you do during Construction, but the extent that you do them, and the order in which you do them may change. During Inception a project team will spend a lot of time writing initial, point- form use cases in order to understand the scope of their system, but if they write any code at all it is likely for user interface (UI) prototyping. During Construction any use case work will likely be to finalize the definition of a use case before writing the detailed source code which implements it. During both phases you work on use cases and source code, but in different ways. Each phase ends with a well-defined milestone. At these points, the stakeholders assess the project, including what has been done and the plans for moving forward.

8 A go/no-go decision is made about whether to proceed with the project. Each phase has a specific set of goals, which are addressed within the iterations of the phase, so that the phase milestone may be met. Figure 2 overviews the primary activities and milestones of each phase; each phase is explored in detail within the following sections. In many ways phases provide the glue which holds the RUP. together, but the disciplines of the RUP (Section 2) capture its heart. Figure 2. The RUP phases and their milestones. The Inception Phase The primary goals of the Inception phase are to achieve stakeholder consensus regarding the objectives for the project and to obtain funding. To do this you will develop a high-level requirements model which will delimit the scope of the project, and potentially start the development of a user interface (UI) prototype.

9 You will start to install the work environment and tailor the process for the team. You will also develop a high-level plan for how the project will proceed. At the end of this phase you hold the Lifecycle Objectives (LCO) milestone where your stakeholders assess the state of the project and must agree: 1. On the scope of the project 2. That the initial requirements have been identified (albeit without much detail). 3. That your software development plan is realistic 4. That the risks have been identified and are being managed appropriately 5. That the business case for the project makes sense 6. That the development process has been tailored appropriately The Elaboration Phase During the Elaboration phase you specify requirements in greater detail and prove the architecture for the system.

10 The requirements are detailed only enough to understand architectural risks and to ensure that there is an understanding of the scope of each requirement for subsequent planning. To prove the architecture you will implement and test an end-to-end skeleton of working code which supports the high-risk use cases for your system. At the end of this phase you must hold the Lifecycle Architecture (LCA) milestone review where your stakeholders assess the state of the project and must agree that the: 1. Project vision has stabilized and is realistic 2. Requirements for the project (although they will still evolve). Copyright 1999-2005 Scott W. Ambler Page 3. 3. Architecture is stable and sufficient to satisfy the requirements 4. 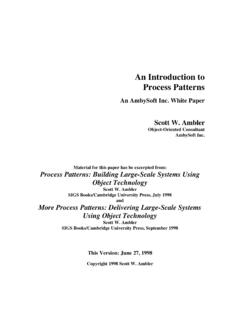 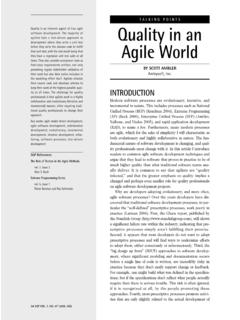 Quality in an Agile World software. In short, the bureaucrats have taken over in many traditional information technology (IT) organiza-tions. Something has to give.

APPENDIX A: Culvert Sizing procedures for the 100 …

APPENDIX A: Culvert Sizing procedures for the 100-Year Peak Flow A. INTRODUCTION Several methods have been developed for estimating the peak flood discharge 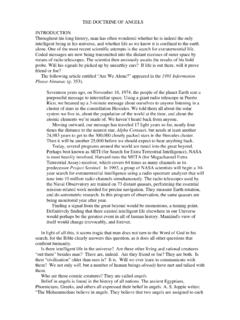 THE DOCTRINE OF ANGELS INTRODUCTION - …

THE DOCTRINE OF ANGELS INTRODUCTION Throughout his long history, man has often wondered whether he is indeed the only intelligent being in his universe, and whether life as we know it is confined to the earth 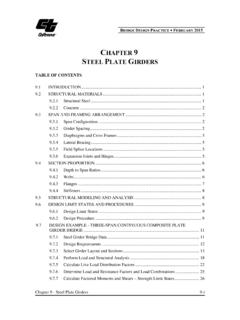 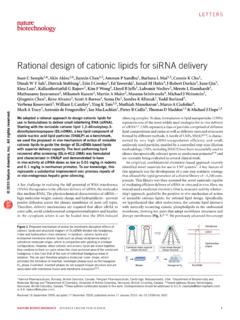