A Roadmap for US Robotics From Internet to Robotics

2 A Roadmap for U.S. Robotics – From Internet to Robotics What follows is a summary of the major findings across all of the workshops, the opportunities and

4 Key Challenges / Capabilities Motivating/Exemplar Scenarios Capabilities Roadmap 804. Research/Technologies Actuation Systems Energy and Power Systems Fabrication and Materials Technology Planning and Control 855. Contributors 86 OverviewRobotics as a Key Economic Enabler Over the past 50 years, robots have been primarily used to provide increased accuracy and throughput for particular, repetitive tasks, such as welding, painting, and machining, in hazardous, high volume manufacturing environments. Automating such dirty, dull, and dangerous functions has mostly involved implementing customized solutions with relatively specific, near term value. Although a sizeable industrial Robotics industry has developed as a result, the applications for such first generation Robotics solutions have proven to be relatively narrow and largely restricted to static, indoor environments, due to limitations in the enabling the past five years, however, tremendous advancements in Robotics technology have enabled a new generation of applications in fields as diverse as agile manufacturing, logistics, medicine, healthcare, and other commercial and consumer market segments.

5 Further, it is becoming increasingly evident that these early, next generation products are a harbinger of numerous, large scale, global, Robotics technology markets likely to develop in the coming decade. Owing to the inexorable aging of our population, the emergence of such a next generation, robotech industry will eventually affect the lives of every American and have enormous economic, social, and political impact on the future of our nation. Unfortunately, the United States lags behind other countries in recognizing the importance of Robotics technology. While the European Union, Japan, Korea, and the rest of the world have made significant R&D investments in Robotics technology, the investment, outside unmanned systems for defense purposes, remains practically non-existent. Unless this situation can be addressed in the near future, the United States runs the risk of abdicating our ability to globally compete in these emerging markets and putting the nation at risk of having to rely on the rest of the world to provide a critical technology that our population will become increasingly dependent upon.

6 Robotech clearly represents one of the few technologies capable in the near term of building new companies and creating new jobs and in the long run of addressing an issue of critical national articulate the need for the United States to establish a national robotech initiative, over 140 individuals from companies, laboratories, and universities from across the country joined forces to produce a definitive report that (1) identifies the future impact of Robotics technology on the economic, social, and security needs of the nation, (2) outlines the various scientific and technological challenges, and (3) documents a technological Roadmap to address those challenges. This effort was sponsored by the Computing Community Consortium (CCC) and led by 12 world class researchers from the leading Robotics academic institutions in the United States. The project included three application oriented workshops that focused on efforts across the manufacturing, healthcare/medical, and services Robotics markets; plus one on blue-sky research that addressed a number of enabling technologies that must be the focus of sustained research and application development in order for the to remain a leader in Robotics technology and commercial development.

7 Overview Robotics as a Key Economic Enabler 12 A Roadmap for Robotics From Internet to RoboticsWhat follows is a summary of the major findings across all of the workshops, the opportunities and challenges specific to each of the three targeted markets, and recommended actions that must be taken if the United States is to remain globally competitive in Robotics technology. Detailed reports from each of the four workshops are also available. Roadmap Results: Summary of Major Findings Robotics technology holds the potential to transform the future of the country and is likely to become as ubiquitous over the next few decades as computing technology is today. The key driver effecting the long term future of Robotics technology is our aging population both in terms of its potential to address the gap created by an aging work force as well as the opportunity to meet the healthcare needs of this aging population. Led by Japan, Korea, and the European Union, the rest of the world has recognized the irrefutable need to advance Robotics technology and have made research investment commitments totaling over $1 billion; the investment in Robotics technology, outside unmanned systems for defense purposes, remains practically non-existing.

8 Robotics technology has sufficiently advanced, however, to enable an increasing number of human augmentation solutions and applications in a wide range of areas that are pragmatic, affordable, and provide real value. As such, Robotics technology offers a rare opportunity to invest in an area providing the very real potential to create new jobs, increase productivity, and increase worker safety in the short run, and to address the fundamental issues associated with economic growth in an era significant aging of the general population and securing services for such a population. Each workshop identified both near and long term applications of Robotics technology, established 5, 10, and 15 year goals for the critical capabilities required to enable such applications, and identified the underlying technologies needed to enable these critical capabilities. While certain critical capabilities and underlying technologies were domain-specific, the synthesis effort identified certain critical capabilities that were common across the board, including robust 3D perception, planning and navigation, human like dexterous manipulation, intuitive human-robot interaction, and safe robot behavior.

9 Market Specific Conclusions Manufacturing The manufacturing sector represents 14% of the GDP and about 11% of the total employment. Up to 75% of the net export of the is related to manufacturing. This sector represents an area of significant importance to the general economic health of the country. In manufacturing much of the progress and the processes involving Robotics technology historically have been defined by the automotive sector and have been very much driven by price and the need to automate specific tasks particular to large volume manufacturing. The new economy is much less focused on mass manufacturing, however, and more concentrated on producing customized products. The model company is no longer a large entity such as GM, Chrysler, or Ford, but small and medium sized enterprises as for example seen in the Fox Valley or in the suburbs of Chicago. The need in such an economy is far more dependent on higher degrees of adaptation, ease of use, and other factors that enable small runs of made to order products.

10 Although the United States has continued to lead the world over the last decade in increasing manufacturing productivity, it is becoming increasingly difficult for us to compete with companies in low-salary countries producing the same products using the same tools and processes. Through the development and adoption of next generation Robotics technology and the advancement of a more highly trained workforce, however, it is possible for the United States to continue to lead the world in manufacturing productivity, especially for small and medium sized companies. Doing so will enable the nation to maintain a strong, globally competitive manufacturing base, ensure our continued economic growth, and help safeguard our national security. Logistics The efficiency of logistics processes is essential to most aspects of our daily lives from mail delivery to the availability of food in grocery stores. The United States currently imports in excess of 100,000 containers daily, the contents of which must be processed, distributed and made available to customers. 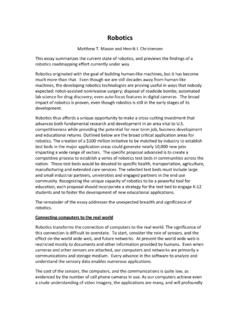 Robotics Matthew T. Mason and Henrik I. Christensen This essay summarizes the current state of robotics, and previews 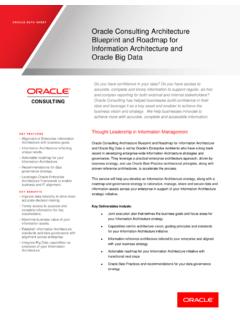 OR ACL E D AT A SH E ET Oracle Consulting Architecture Blueprint and Roadmap for Information Architecture and Oracle Big Data Do you have confidence in your data? 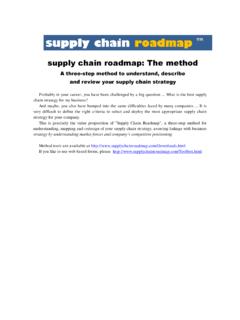 supply chain roadmap: The method A three-step method to understand, describe and review your supply chain strategy Probably in your career, you have been challenged by a big question ... 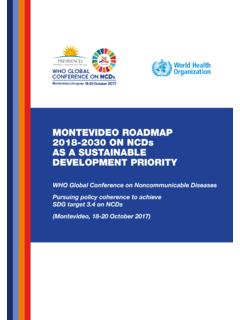 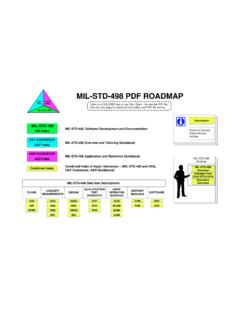 6. Text outlined in MAGENTA is a Link to a term in Section 3 Definitions, a Link to Section 6.8 Subject Term Listing in the 498-STD.PDF file, or a Link to an index entry in the 498-IDX.PDF file.

vi ACKNOWLEDGMENTS This report has benefitedfrom the knowledge and expertise of many individuals, all sharing a commit-ment to expanding economic opportunities for wom-

Oracle, OR ACL E, Architecture Blueprint and Roadmap for, Supply chain roadmap: The method, ROADMAP, AS A SUSTAINABLE DEVELOPMENT PRIORITY, ROADMAP for MIL-STD-498