Accelerators for america 's future Prosperity, security, health, energy, environment. Meeting these 21st-century challenges and seizing the opportunities they bring will determine the shape of america 's future . The science and technology of particle Accelerators can contribute to our success. Today, besides their role in scientific discovery, particle beams from some 30,000 Accelerators are at work worldwide in areas ranging from diagnosing and treating disease to powering industrial processes. The Accelerators of tomorrow promise still greater oppor- tunities. Next-generation particle beams represent cheaper, greener alternatives to traditional industrial processes.

1 Accelerators for america 's future Prosperity, security, health, energy, environment. Meeting these 21st-century challenges and seizing the opportunities they bring will determine the shape of america 's future . The science and technology of particle Accelerators can contribute to our success. Today, besides their role in scientific discovery, particle beams from some 30,000 Accelerators are at work worldwide in areas ranging from diagnosing and treating disease to powering industrial processes. The Accelerators of tomorrow promise still greater oppor- tunities. Next-generation particle beams represent cheaper, greener alternatives to traditional industrial processes.

2 They can give us clean energy through safer nuclear power, with far less waste. They can clean up polluted air and water; deliver targeted cancer treatment with minimal side effects; and contribute to the development of new materials. As tools for inspecting cargo and improving the monitoring of test ban compliance, Accelerators can strengthen the nation's security. Other nations are already applying next-generation accelerator technologies to current-generation issues and challenging United States leadership in accelerator innovation. To remain competitive will require a sustained and focused national effort, along with changes in policy.

3 Advances in accelerator technology most often come from basic science. The Department of Energy's Office of Science has launched an initiative to encourage breakthroughs in accelerator science and their translation into applications for the nation's health, wealth and security. At an inaugural workshop, experts from across the spectrum of accelerator applications identified opportunities and challenges for particle beams in energy and environment, medicine, industry, national security and discovery science. Accelerators for america 's future captures their perspectives, insights and conclusions, informing a national program to put Accelerators to work on the challenges of our time.

4 A MESSAGE FROM THE CHAIRS. In October 2009, the Department of Energy's Office of High Energy Physics sponsored a symposium and workshop, Accelerators for america 's future . Its purpose was to elicit the views and opinions of a wide range of accelerator users on the challenges and opportunities for developing and deploying Accelerators to meet national needs. Some 300 of them attended the one-day symposium and poster session. In the two-day workshop that followed, 120 users of accelerator technology, from small business owners to well-known researchers, formed five working groups in Energy and Environ- ment, Industry, Medicine, National Security and Discovery Science.

5 Their charge was to give us their perspective on needs, challenges and areas of greatest promise; and to provide guidance on bridging the gap between accelerator research and technology deployment. For two days, they discussed, disagreed, concurred, consulted, reconsidered and eventually converged on results. The groups' reports varied in scope, approach and level of technical detail. Sometimes their findings conflicted. The workshop was designed as an inclusive, broad-spectrum effort to learn from stakeholders with boots on the ground in fields that depend on accelerator science and technology. This report captures what they told us.

7 A beam of the right particles with the right energy at the right intensity can shrink a tumor, produce cleaner energy, spot suspicious cargo, make a better radial tire, clean up dirty drinking water, map a protein, study a nuclear explosion, design a new drug, make a heat-resistant automotive cable, diagnose a disease, reduce nuclear waste, detect an art forgery, implant ions in a semiconductor, prospect for oil, date an archaeological find, package a Thanksgiving turkey or discover the secrets of the universe. Particle beams to meet national challenges The beams produced by today's particle Accelerators address many of the challenges confronting our nation in the 21st century: energy, the environment, good jobs and economic security, health care, national defense and the war on terror.

8 The next-generation Accelerators of tomorrow have the potential to make still greater contributions to the nation's health, wealth and national security. Incorporating innovative accelerator technologies into tomorrow's nuclear energy supply, for example, has the potential to make nuclear power safer and cleaner with far less nuclear waste. Electron beams could treat flue gases to make coal-fired plants cleaner and more environmentally friendly. They could detoxify waste water and make municipal water safe to drink. Advances in beam therapy offer the promise of improving cancer treatment by maximizing the beam energy delivered to a tumor while minimizing the damage to normal tissue.

9 Accelerators could serve as reliable alternative sources of critically needed medical isotopes currently made in nuclear reactors some no longer produced at all in the United States. In industry, Accelerators represent cheaper, greener alternatives to hundreds of traditional manufacturing processes. For security and defense, compact, rugged, fieldable Accelerators would have innovative applications from safe and reliable cargo inspection to monitoring international test ban compliance. The continuing development of accelerator technology will give scientists the tools for discovery across a spectrum of science from particle physics to human biology.

10 For the United States to remain competitive in accelerator science and technology, however, will require a sustained and focused program and changes in national policy. 4 Accelerators for america 's future Photo: Sandbox Studio 5. Introduction Practical Particles The marquee superstars of the particle accelerator world are the giant research Accelerators like Fermilab's Tevatron, Brookhaven's Relativistic Heavy Ion Collider, and most recently CERN's Large Hadron Collider in Geneva, Switzerland. Behind the headlines, though, are the tens of thousands of Accelerators that Tens of thousands are at work every day producing particle beams in hospitals and clinics, in manufacturing plants and industrial laboratories, in ports and printing plants of Accelerators are and, literally, on the ships at sea. 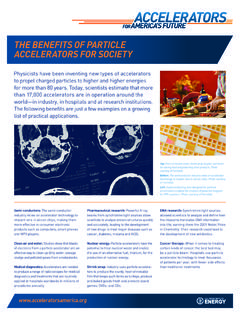 THE BENEFITS OF PARTICLE ACCELERATORS FOR …

www.acceleratorsamerica.org THE BENEFITS OF PARTICLE ACCELERATORS FOR SOCIETY Semi-conductors: The semi-conductor industry relies on …

Industrial Society and Its Future - littérature 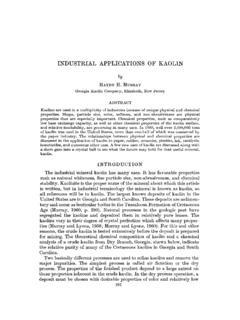 by - The Clay Minerals Society

INDUSTRIAL APPLICATIONS OF KAOLIN 293 particle size distribution. In many applications a coarse-particle kaolin may not work whereas a … Insight Report Readiness for the Future of … 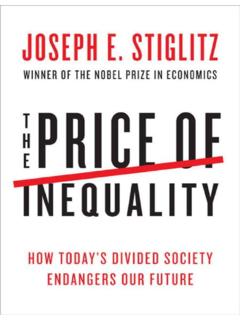 The Price of Inequality: How Today's Divided …