2 exposure standards have been developed for conventional work shifts of five consecutive 8-hour work days, followed by two days off (40-hour work week). Deviations from this traditional shift pattern are now the norm within the mining industry, and the potential for increased periods of contaminant exposure needs to be addressed through appropriate Adjustment of 8-hour time-weighted exposure standards . From trial and discussion there are four principal Adjustment models that have emerged over time from the burgeoning number on offer: Brief and Scala Model: Accounts for increased exposure time and reduced recovery time, but does not consider the action of the agent within the body. This model is considered to be the most conservative of the four major models.

3 OSHA Model: Categorises substances based on their toxic effect and assumes the magnitude of toxic response correlates to the concentration reaching the site of action of the agent. Pharmacokinetic Model: Uses a scientific, substance-specific methodology based around the concept of body burden'. The model is considered to be a relatively accurate method of exposure standard Adjustment , but involves complicated calculations and knowledge of biological half-lives. Qu bec Model: Developed from the OSHA model but attributed the most recent, available toxicological information to generate Adjustment categories for specific contaminants. These categories further assign an Adjustment type and associated reduction factor calculation.

4 Recommended exposure standard Adjustment method There is consensus that employees working in excess of 8-hours/day or 40-hours/week should be provided with at least an equivalent degree of protection to those employees working conventional work shifts. There is no national consensus however as to the preferred exposure standard Adjustment method for persons employed in mining operations. To provide current and relevant guidance to the mining industry for Adjustment of exposure standards for extended work shifts, recommendations made by the Australian Institute of Occupational Hygienists (AIOH) have been adopted by the Department of Mines, Industry Regulation and Safety (the department), and use of the modified Qu bec Model endorsed.

5 The Qu bec Model, developed by the Institut de recherche Robert-Sauv en sant et en s curit du travail (IRSST), is supported by a comprehensive technical guide and a selection tool to assist in determining the most appropriate Adjustment categories. This tool and guidance material have been adapted by the AIOH to represent current Safe Work Australia exposure standards , promoting applicability, ease of use and a standardised approach for use across the mining industry in Western Australia. This guide and its endorsement of the modified Qu bec Model for extended work shift exposure standard Adjustment , supersedes the department's Adjustment of exposure standards for extended workshifts guideline published in 1999.

6 In that guideline the recommended Adjustment matrix considered contaminant health effects and shift rostering, however it does not reflect current toxicological knowledge. Adjustment of atmospheric contaminant exposure standards guide Page 3 of 19. exposure standard Adjustment in the mining industry Certain conditions of application are associated with use of the Qu bec Model as follows: 1. Short-term exposure limits (STELs) and peak limitations are not subject to the Adjustment principle, only the 8-hour time-weighted averages (TWAs) are subject to this. 2. The 8-hour TWA Adjustment process applies only to nominal schedules with shifts of no less than 4 hours and no more than 16 hours. 3. In no case can the adjusted exposure standard be greater than the 8-hour TWA.

7 Where extended work shifts operate within the Western Australian mining industry, the following strategy should be applied with regard to occupational exposure standards . 1. Implement an appropriate exposure standard reduction regime that is either in-line with the Qu bec model, or provides for a more conservative approach. Adjusted average exposure values generated via the Qu bec Model are not to be exceeded. 2. Pursue the as low as reasonably practicable (ALARP) principle industry should ensure that worker exposure to atmospheric contaminants is reduced as far as practicable below occupational exposure standards . 3. Adopt internal management action levels at some percentage of the exposure standard ( 50%). 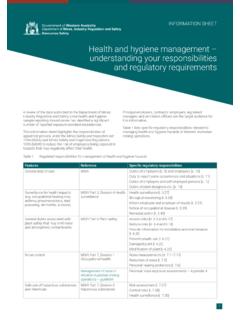 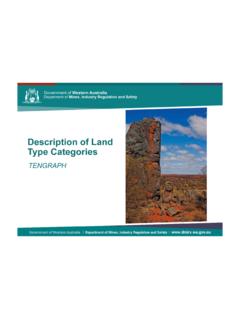 Preamble This manual has been created to assist in the understanding of the different land types displayed in TENGRAPH. It contains descriptions for each 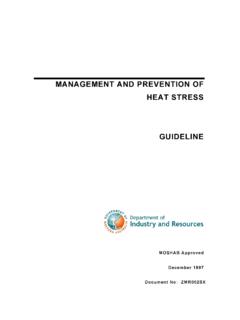 MANAGEMENT AND PREVENTION OF HEAT … 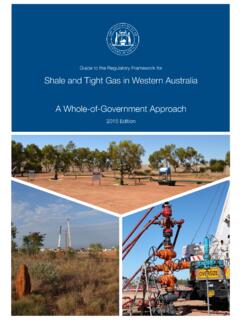 code of practice consultation at work

c onsultation at work - code of practice. 1. introduction. consultation between employers and employees is an essential part of effectively managing safety and health …

REPORT Fatal accidents in the Western Australian mining industry 2000-2012 What lessons can we learn? 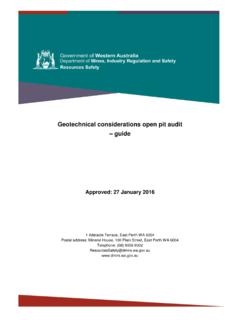 Geotechnical considerations open pit audit – guide Page 2 of 28 Introduction This document was reformatted in November 2015. At this time no … Tailings storage facilities in Western Australia – CODE OF PRACTICE. 2. 2 Classification. 2.1 Introduction. The primary function of a TSF is the safe and economical 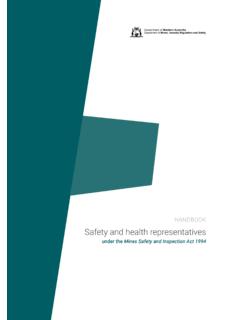 under the Mines Safety and Inspection Act 1994

Safety and health representatives under the . Mines Safety and Inspection Act 1994. Handbook

This publication was prepared under contract number 270-95-0013 for the Substance Abuse and Mental Health Services Administration (SAMHSA), U.S. Department of Health and