2 The role of this guide is to inform clinical decision- Clemastine Use of diphenhydramine in situations such as acute treatment of making, research, training, quality measures and regulations concerning the prescribing of Cyproheptadine severe allergic reaction may be appropriate medications for older adults to improve safety and quality of care. It is based on The AGS Dexbrompheniramine Dexchlorpheniramine QE = Moderate; SR = Strong 2015 Updated BEERS Criteria for Potentially Inappropriate Medication Use in Older Adults. Dimenhydrinate Originally conceived of in 1991 by the late Mark BEERS , MD, a geriatrician, the BEERS Diphenhydramine (oral). Criteria catalogues medications that cause side effects in the elderly due to the Doxylamine physiologic changes of aging.

3 In 2011, the AGS sponsored its rst update of the criteria, Hydroxyzine Meclizine assembling a team of experts and using an enhanced, evidence-based methodology. In Promethazine 2015, the AGS again funded the development of the Updated Criteria using an evidence- Triprolidine based methodology and rating each Criterion (quality of evidence and strength of Antiparkinsonian agents Avoid evidence) using the American College of Physicians' Guideline Grading System, which is Benztropine (oral) Not recommended for prevention of extrapyramidal symptoms based on the GRADE scheme developed by Guyatt et al. Trihexyphenidyl with antipsychotics; more-effective agents available for The full document, along with accompanying resources can be viewed in their entirety treatment of Parkinson disease online at QE = Moderate; SR = Strong INTENDED USE Antispasmodics: Avoid Atropine (excludes Highly anticholinergic, uncertain effectiveness The goal of this guide is to improve care of older adults by reducing their exposure to ophthalmic).

4 Potentially Inappropriate Medications (PIMS). QE = Moderate; SR = Strong Belladonna alkaloids Clidinium- This should be viewed as a guideline for identifying medications for which the risks Chlordiazepoxide of their use in older adults outweigh the bene ts. Dicyclomine These criteria are not meant to be applied in a punitive manner. Hyoscyamine This list is not meant to supersede clinical judgment or an individual patient's values Propantheline and needs. Prescribing and managing disease conditions should be individualized Scopolamine and involve shared decision-making. Antithrombotics These criteria also underscore the importance of using a team approach to Dipyridamole, oral Avoid prescribing and the use of non-pharmacological approaches and of having short-acting (does not May cause orthostatic hypotension; more effective alternatives economic and organizational incentives for this type of model.)

5 Apply to the extended- available; IV form acceptable for use in cardiac stress testing Two companion pieces were developed for the 2015 update. The rst addresses release combination QE = Moderate; SR = Strong the best way for patients, providers, and health systems to use (and not use) the with aspirin). 2015 AGS BEERS Criteria. The second is a list of alternative medications included Ticlopidine Avoid in the current use of High-Risk Medications in the Elderly and Potentially Harmful Drug-Disease Interactions in the Elderly quality measures. Both pieces can be found Safer, effective alternatives available on QE = Moderate; SR = Strong The criteria are not applicable in all circumstances ( patient's receiving palliative and hospice care).

6 If a provider is not able to nd an alternative and chooses to continue to CNS=central nervous system; NSAIDs=nonsteroidal anti-inflammatory drugs; SIADH, syndrome of use a drug on this list in an individual patient, designation of the medication as potentially inappropriate antidiuretic hormone. inappropriate can serve as a reminder for close monitoring so that adverse drug effects can be incorporated into the electronic health record and prevented or detected early. AGS THE AMERICAN GERIATRICS SOCIETY. Geriatrics Health Professionals.. Leading change. Improving care for older adults. PAGE 1 PAGE 2 Table 1 (continued on page 3). Table 1 Continued Table 1 Continued Organ System, Therapeutic Organ System, Therapeutic Category, Drug(s) Recommendation, Rationale, QE, SR Category, Drug(s) Recommendation, Rationale, QE, SR.

10 Or delirium unless nonpharmacological options ( , behavioral Digoxin Avoid as first-line therapy for atrial fibrillation. Avoid as first- interventions) have failed or are not possible and the older adult line therapy for heart failure. If used for atrial fibrillation or is threatening substantial harm to self or others heart failure, avoid dosages > mg/d QE = Moderate; SR = Strong Use in atrial brillation: should not be used as a rst-line agent in atrial brillation, because more-effective alternatives exist and it may be associated with increased mortality Barbiturates Avoid Use in heart failure: questionable effects on risk of hospitalization Amobarbital High rate of physical dependence, tolerance to sleep bene ts, and may be associated with increased mortality in older adults Butabarbital greater risk of overdose at low dosages with heart failure; in heart failure, higher dosages not associated Butalbital QE = High. 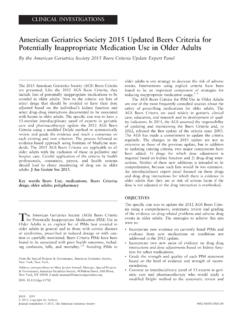 This completed form is required for ALL projects.