A Streetcar Named Desire The Sun Also Rises A Tale of Two Cities Their Eyes Were Watching God The Things They Carried To Kill a Mockingbird Uncle Tom’s Cabin ... Bloom’s Literary Criticism books are available at special discounts when purchased in bulk quantities for businesses, associations, institutions, or

2 Brave New World New EditionCopyright 2011 by Infobase PublishingIntroduction 2011 by Harold BloomAll rights reserved. No part of this book may be reproduced or utilized in any form or by any means, electronic or mechanical, including photocopying, recording, or by any information storage or retrieval systems, without permission in writing from the publisher. For information contact:Bloom s Literary CriticismAn imprint of Infobase Publishing132 West 31st StreetNew York NY 10001 Library of Congress Cataloging-in-Publication DataAldous Huxley s Brave new World / edited and with an introduction by Harold Bloom. New ed. p. cm. (Bloom s guides) Includes bibliographical references and index.

4 Because of the dynamic nature of the Web, some addresses and links may have changed since publication and may no longer be 7 Biographical Sketch 9 The Story Behind the Story 12 List of Characters 16 Summary and Analysis 19 Critical Views 69 Rudolf B. Schmerl on Creating Fantasy 69 Cristie L. March on the Place of Women in Brave New World 73 Robert L. Mack on Elements of Parody in Brave New World 75 Cass R. Sunstein on Huxley and George Orwell s Contrasting Views of Love and Sex 82 Richard A. Posner on the Novel s Distortion of Contemporary Society 86 Carey Snyder on Huxley s and Lawrence s Use of the Past 91 John Coughlin on Brave New World and Ralph Ellison s Invisible Man 96 David Garrett Izzo on the Novel s Influence and Meaning 100 Coleman Carroll Myron on Escape Routes in the Novel 104 Scott Peller on Fordism in Brave New World 110 Works by Aldous Huxley 118 Annotated Bibliography 121 Contributors 123 Acknowledgments 125 Index 1277In his foreword to a 1946 edition of Brave New World (1931)

5 , Aldous Huxley expressed a certain regret that he had written the book when he was an amused, skeptical aesthete rather than the transcendental visionary he had since become. Fifteen years had brought about a World in which there were only national-istic radicals of the right and nationalistic radicals of the left, and Huxley surveyed a Europe in ruins after the completion of the Second World War. Huxley himself had found refuge in what he always was to call the Perennial Philosophy, the reli-gion that is the conscious and intelligent pursuit of man s Final End, the unitive knowledge of the immanent Tao or Logos, the transcendent godhead or Brahman. As he sadly remarked, he had given his protagonist, the Savage, only two alternatives: to go on living in the Brave New World whose god is Ford (Henry), or to retreat to a primitive Indian village, more human in some ways, but just as lunatic in others.

6 The poor Savage whips himself into the spiritual frenzy that culminates with his hanging himself. Despite Huxley s literary remorse, it seems to me just as well that the book does not end with the Savage saving himself through a mystical contemplation that murmurs That are Thou to the Ground of all years after Huxley s foreword, Brave New World is at once a bit threadbare, considered strictly as a novel, and more relevant than ever in the era of genetic engineering, vir-tual reality, and the computer hypertext. Cyberpunk science fiction has nothing to match Huxley s outrageous inventions, and his sexual prophecies have been largely fulfilled.

7 A new technology founded almost entirely on information rather than production, at least for the elite, allies Mustapha Mond and Newt Gingrich, whose orphanages doubtless could have been geared to the bringing up of Huxley s Bokanovsky groups. Even Huxley s intimation that marriage licenses will be sold IntroductionHAROLD BLOOM8like dog licenses, good for a period of twelve months was being seriously considered in California not so long ago. It is true that Huxley expected (and feared) too much from the peaceful uses of atomic energy, but that is one of his few fail-ures in secular prophecy. The god of the Christian Coalition may not exactly be Our Ford, but he certainly is the god whose worship assures the World without end of Big Brave New World for the first time in several decades, I find myself most beguiled by the Savage s passion for Shakespeare, who provides the novel with much more than its title.

8 Huxley, with his own passion for Shakespeare, would not have conceded that Shakespeare could have provided the Savage with an alternative to a choice between an insane utopia and a barbaric lunacy. Doubtless, no one ever has been saved by reading Shakespeare or by watching him performed, but Shakespeare, more than any other writer, offers a possible wisdom as well as an education in irony and the powers of lan-guage. Huxley wanted his Savage to be a victim or scapegoat, quite possibly for reasons that Huxley himself never under-stood. Brave New World , like Huxley s earlier and better novels Antic Hay and Point Counter Point, is still a vision of Eliot s The Waste Land, of a World without authentic belief and spiri-tual values.

9 The author of Heaven and Hell and the anthologist of The Perennial Philosophy is latent in Brave New World , whose Savage dies in order to help persuade Huxley himself that he needs a reconciliation with the mystical Ground of all SketchAldous Leonard Huxley was born on July 6, 1894, in Godalming in Surrey, England. He came from a family of dis-tinguished scientists and writers: His grandfather was Thomas Henry Huxley, the great proponent of evolution, and his brother was Julian Sorrell Huxley, who became a leading biolo-gist. Aldous attended the Hillside School in Godalming and then entered Eton in 1908, but he was forced to leave in 1910 when he developed a serious eye disease that left him tempo-rarily blind.

10 In 1913, he partially regained his sight and entered Balliol College, 1915, Huxley became associated with a circle of writers and intellectuals who gathered at Lady Ottoline Morell s home, Garsington Manor House, near Oxford; there he met Eliot, Bertrand Russell, Osbert Sitwell, and other figures. After working briefly in the War Office, Huxley gradu-ated from Balliol in 1918 and the next year began teaching at Eton. He was, however, not a success there and decided to become a journalist. Moving to London with his wife, Maria Nys, a Belgian refugee whom he had met at Garsington and married in 1919, Huxley wrote articles and reviews for the Ath-enaeum under the pseudonym s first two volumes were collections of poetry, but it was his early novels Crome Yellow (1921), Antic Hay (1923), and Those Barren Leaves (1925) that brought him to promi-nence. 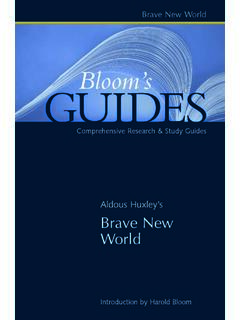 1925 he had also published three volumes of short stories and two volumes of essays. In 1923 Huxley and his wife and son moved to Europe, where they traveled widely in France, Spain, and Italy. A journey around the world in 1925–26 led to the travel book Jesting Pilate(1926), just as a later trip to Central America produced Beyond the Mexique ... 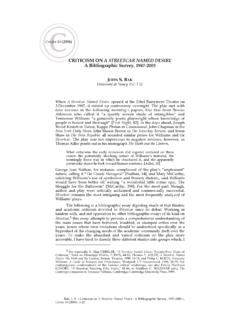 CRITICISM ON A STREETCAR NAMED DESIRE A …