ALL ABOUT ANTENNAS Part 1 of a Series - …

ALL ABOUT ANTENNAS . part 1 of a Series By Bob Grove W8 JHD, Publisher, Monitoring Times N o subject is more widely discussed in the radio field as ANTENNAS , and with good reason; after you select your radio equipment, no accessory is more important. There are many myths surrounding boundaries between air masses, and they can be diffracted (scattered) by a ground clutter of reflective surfaces. Radio and light waves travel through the vacuum of space approximately 186,000 miles (that is, the lower the frequency), the more the absorption. This explains why daytime recep- tion below roughly 10 megahertz (MHz) is so poor. But, the E layer also reflects shorter- ANTENNAS , and we're going to put them to rest (300 million meters) per second, but when they wavelength (higher frequency) signals back in this Series . pass through a dense medium, they slow down; to Earth; the higher the frequency, the more this velocity factor, is given as a specifica- the reflection.

from the archives of Bob Grove MONITORING TIMES 1 N o subject is more widely discussed in the radio field as antennas, and with good reason; after you select

About, Part, Antenna, All about antennas part 1 of

1 ALL ABOUT ANTENNAS . part 1 of a Series By Bob Grove W8 JHD, Publisher, Monitoring Times N o subject is more widely discussed in the radio field as ANTENNAS , and with good reason; after you select your radio equipment, no accessory is more important. There are many myths surrounding boundaries between air masses, and they can be diffracted (scattered) by a ground clutter of reflective surfaces. Radio and light waves travel through the vacuum of space approximately 186,000 miles (that is, the lower the frequency), the more the absorption. This explains why daytime recep- tion below roughly 10 megahertz (MHz) is so poor. But, the E layer also reflects shorter- ANTENNAS , and we're going to put them to rest (300 million meters) per second, but when they wavelength (higher frequency) signals back in this Series . pass through a dense medium, they slow down; to Earth; the higher the frequency, the more this velocity factor, is given as a specifica- the reflection.

2 This is what provides distance tion for transmission lines. When we specify (DX) on the higher shortwave frequencies. Radio Waves: antenna and transmission line lengths, these Most DX, however, is produced by the next Some Basics are electrical wavelengths which are shorter region up, the F layer, which retains its elec- When we connect a wire between the two than free-space wavelengths because of this trical charge well into the night, reflecting terminals of a battery, electric current flows. reduction in speed. signals back to the earth over great distances. This current generates a combined electric and All of these solar influences increase during magnetic energy field, a zone which extends the maximum sunspot cycle every 11 years, at the speed of light into space. When we break Propagation then gradually diminish again. We refer to the behavior of radio waves The earth itself can reflect radio waves, the circuit, the energy field collapses back as they travel over distance as propagation.

3 Allowing a phenomenon called multihop;. onto the wire. If we reverse the connections Ground waves stay close to the earth's surface, combinations of earth reflections and iono- back and forth rapidly, each successive pulse's never leaving the lower atmosphere. They are spheric refractions producing as many as five electrical (positive and negative) charges and severely attenuated (reduced), rarely reaching skips! More skips than that would be attenu- magnetic (north and south) poles reverse as more than a few hundred miles even under ated by ionospheric absorption and terrestrial well. This simulates a basic radio wave which ideal conditions. Surface waves, the consists of a magnetic and electric field vibrat- lowest ground waves, often reach- ing simultaneously, or in phase. ing their destination by following The electric field ( E for electro-motive the curvature of the earth.)

4 Space force, measured in volts) is parallel to the waves are the line-of-sight ground axis of the wire, while the magnetic field waves which travel directly from ( H named after researcher Joseph Henry) is antenna to antenna . perpendicular to it. This field is described as Space waves at VHF and UHF, electromagnetic. Familiar illustrations depict- when encountering abrupt weather ing radio waves as wavy lines or crosshatched boundary changes, experience arrows are graphic representations only. There temperature inversions and ducting are no lines of force as implied when iron as well as other influences that can filings line up during magnet demonstrations;. funnel signals into significantly those filings line up because they all become extended ground wave coverage. little magnets, attracting and repelling one At the upper reaches of our atmo- another.

5 Radio waves are only a continuous sphere, ultraviolet rays (UV) from field of energy which, like a beam of light, the sun ionize (electrically charge). is strongest at its source, weakening with the air atoms, lending the name distance as it spreads its energy over an ever- ionosphere to this highest zone widening area. of the earth's atmosphere. Radio In fact, radio waves and light waves differ waves which reach these ionized only in frequency over a continuous electro- layers, averaging 25-200 miles magnetic spectrum, with higher-frequency high, are called sky waves light having greater energy and the ability to be The lowest regions of the seen by some living organisms. Scientists even ionosphere, the D and E layers, refer to an antenna as being illuminated by are influenced directly by sunlight;. radio energy. Radio waves can be reflected by their effects begin at sunrise, peak buildings, trees, vehicles, moisture, metal sur- at noon, and disappear after sunset.

6 Faces and wires, and the electrically-charged They absorb radio signals. In other Signal propagation is a combination of ground waves and ionosphere. They can be refracted (bent) by words, the longer the wavelength sky waves. from the archives of Bob Grove MONITORING TIMES 1. scattering, rendering the signal unreceivable. Internet sites like publish continuously-updated radio propagation forecasts, and a variety of prediction computer programs are available elsewhere, allowing the user to plan ahead for the most productive use of the spectrum. Tropospheric scattering in the E and F2. layers is fairly common in the 30-50 MHz spectrum, especially during the daytime and during sunspot peaks. It favors the east in the morning and the west in the afternoon. At VHF and UHF, ionospheric propagation is rare. Some sporadic E skip, lasting from a few minutes to an hour or more, may occur in the 50-200 MHz range.

7 It is caused by erratic clouds of ionization at an altitude of 75-100. miles. A similar phenomenon is produced when meteors enter the E layer. At such high speeds, the meteor vaporizes, producing an ionized Terrain, trees, wiring, metal siding, nearby buildings and other reflective surfaces all affect trail which is capable of reflecting VHF signals antenna performance. The lower the antenna , the more obstructed it is likely to be. A basement back to earth 1000 more miles away, most would be a very poor antenna location. Signals are unpredictably reflected by metal and wiring dramatically in the 50-80 MHz spectrum. in and on the walls and ceiling; nearby electric and electronic appliances invite interference to It is estimated that some 200 tons of me- reception; soil absorbs transmitted energy and also reflects signals upward; and signals come teor material, from visible to dust size, strikes mostly from overhead (there aren't many there) rather than from the horizon.

8 The earth every day; much more vaporizes in the upper atmosphere. Because of this constant half-wave, or smaller, dipole, called a doublet, Location, Location, bombardment, there are completely automated or it may be multi-lobed, as in a multiple- systems relying on this technique for long- wavelength antenna , called a longwire. Location . distance data transfer. The elevation pattern, variously called radiation angle, takeoff angle, maximum am- The Radio Horizon Radio waves, like light waves, follow the plitude elevation, and launch angle, is affected line of sight. Because of the curvature of the Patterns by height above ground, length of the antenna earth, higher ANTENNAS see a farther horizon. The shape of the field of energy emit- element(s), and the presence of nearby metal, Assuming a flat, unobstructed terrain, the visual ted by a transmitting antenna , as well as the including other antenna elements.

9 It is an in- horizon is ABOUT 8 miles for a 30-foot-elevated geometric response by a receiving antenna , is tegral part of an antenna 's gain characteristics antenna , increasing to only 16 miles at 120 feet! known as its pattern. It may be a simple donut which we will discuss in a later issue. Notice the square law effect: it requires roughly shape surrounding the axis of the wire as in a four times the height to get twice the distance. Once an antenna is high enough to see past nearby obstructions, it takes at least double that height to notice any improvement. The lower the frequency, the more radio waves are capable of following the curvature of the earth beyond the visual horizon. Typical base- to-mobile communications ranges are ABOUT 50. miles in the 30-50 MHz band, 30 miles at 150-174. MHz, 25 miles at 450-512 MHz, and 20 miles at 806-960 MHz. Obviously, these distances will vary depending upon radiated power, receiver sensitivity, antenna gain, elevation and location.

10 Although the higher the antenna the better, coax cable losses may compromise any signal improvement; the higher the frequency, the worse those losses. For example, at 450 MHz, extend- The higher the frequency, the shorter the ing a 30-foot antenna to 60 feet could increase wavelength and the easier it is for a signal to signal strengths by 5 dB, but if you are using get through an opening in an absorptive or common RG-58/U coax, signal strengths may reflective enclosure. be attenuated by the same amount, resulting in no improvement at all! Nearby trees, buildings and hills take their At 800 MHz, using this small diameter, lossy toll, too. Locating an antenna inside a large ANTENNAS are designed to favor certain direc- RG-58U, signals would get worse with height! building with steel frame and metal reinforce- tions, both for transmitting and receiving. 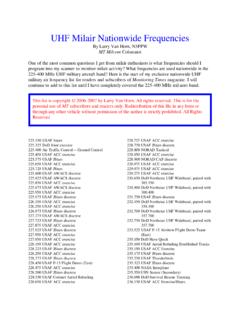 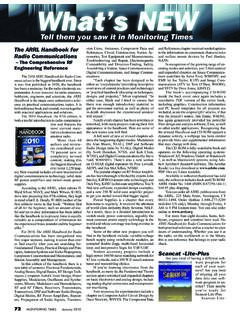 The ARRL Handbook for Radio Communications – The ... 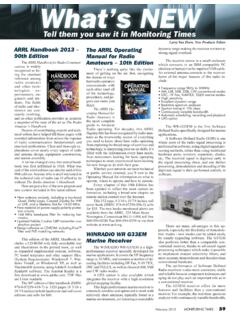 ARRL Handbook 2013 – 90th Edition The ARRL Handbook for Radio Communi - cations is widely recognized as be-ing the standard reference among radio amateurs and other tech-nologists – ex-perimenters, en-gineers and stu-dents. The fields of radio and elec-tronics are con- 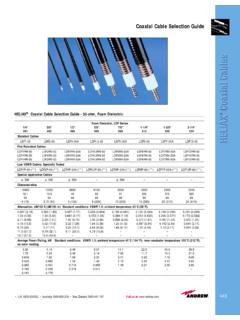 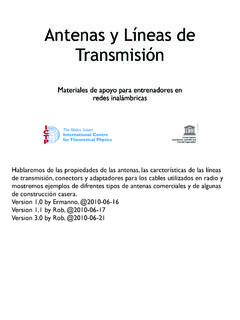 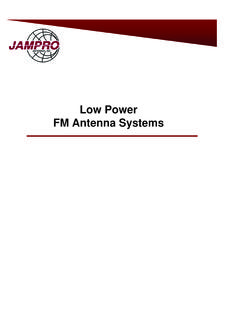