2 VERONIKA PILLWEIN AND STEFAN TAKACS As a model problem for the proposed machinery, we choose the application of a multigrid method to a particular PDE-constrained optimization problem.

2 The rates that can be computed with local Fourier analysis are typically the supremum of some rational function. In the past this supremum was merely approximated numerically by interpo- lation. We are interested in resolving the supremum exactly using a standard tool from symbolic computation: cylindrical algebraic decomposition (CAD). In this paper we work out the details of this symbolic local Fourier analysis for a multigrid solver applied to a PDE- constrained optimization problem. 1. Introduction As mentioned in the abstract, in this work we introduce symbolic local Fourier analysis (sLFA) for analyzing the convergence behavior of a numerical method. Local Fourier analysis (or local mode analysis) is a commonly used approach for designing multigrid methods and analyzing their convergence properties. It dates back to the late 1970s when A. Brandt [2] proposed to use Fourier series in the analysis of multigrid methods. Local Fourier analysis provides a framework to analyze various numerical methods with a unified approach that gives quantitative statements on the methods under investigation, , it leads to the determination of sharp convergence rates.

4 Primary 68W30, 65N12, 26D05, 65N55. The research was funded by the Austrian Science Fund (FWF): W1214-N15, projects DK6 and DK12, and grant P22748-N18. 1. 2 VERONIKA PILLWEIN AND STEFAN TAKACS. As a model problem for the proposed machinery, we choose the application of a multigrid method to a particular PDE- constrained optimization problem. This problem is characterized by a parameter-dependent linear system which is not pos- itive definite. Therefore the construction of a parameter-robust numerical method for such a problem is non-standard. More or less the same problem an the same smoother have been analyzed in [1] using classical local Fourier analysis, , there the smoothing rate was approximated numerically. Here we present a symbolic analysis providing sharp, exact upper bounds. Still, we keep in mind that this analysis can be carried over to a variety of other problems and other (multigrid). solvers. In [12] we used the proposed method for a one dimensional problem and proving smoothing properties only, which was a much easier task to handle.

5 The goal of the present paper is to demonstrate that the analysis can be carried out in an entirely symbolic way and as such leads to sharp estimates for the convergence rates also for two dimensional problems. Aiming at an audience from both numerical and symbolic mathematics we try to stay at an elementary level and keep this note self-contained. For deriving the explicit representation of the convergence rates, we use Cylindri- cal Algebraic Decomposition (CAD), a well established method in symbolic com- putation. It was introduced for solving the problem of quantifier elimination in the theory of real numbers. Below we see that the bound for the convergence rate is defined as the supremum over a certain rational function (after an appropriate rewriting). This allows us to invoke CAD in the solution of the problem. CAD has been applied earlier in the analysis of (systems of) ordinary and partial differential- difference equations [8], where the necessary conditions for stability, asymptotic stability and well-posedness of the given systems were transformed into statements on polynomial inequalities using Fourier or Laplace transforms.

6 This paper is organized as follows. In Section 2 the numerical method analyzed in this paper using symbolic local Fourier analysis is introduced. We recall the method of classical local Fourier analysis and present the setup for the model problem in Section 3. In Sections 4 and 5 the symbolic local Fourier analysis is carried out to give sharp bounds for the convergence rates in the one and two dimensional case, respectively. 2. Model problem The convergence analysis presented in this paper should be understood as a machinery that can be applied to various problems and solvers. The analysis is carried out for the optimization problem constrained to a partial differential equa- tion (PDE- constrained optimization problem), introduced in Subsection , and a multigrid solver, introduced in Subsection A PDE- constrained optimization problem. The analysis is carried out for the following model problem, which is an optimal control problem of tracking type. Problem Find state y and control u such that they minimize Z Z.

9 I,j=1 , k respectively, and the right hand side vector g k is given by g k := ((yD , k,i )L2 ( ) )N. i=1 . k The symbols y k and pk denote the coordinate vectors of the corresponding functions yk and pk with respect to the nodal basis k . A multigrid method. In this subsection we briefly introduce the multigrid framework that we want to analyze. Multigrid methods consist of two main parts: smoothing and coarse-grid correction. Intuitively speaking, the smoother is applied in order to reduce the amplitude of high-frequency modes of the defect, whereas the coarse-grid correction takes care of the low-frequency modes of the overall defect. The local Fourier analysis ensures this in a formal way. 4 VERONIKA PILLWEIN AND STEFAN TAKACS. (0). Starting from an initial approximation xk , one step of the multigrid method with pre + post smoothing steps for solving a discretized equation Ak xk = f k on grid level k is given by: Apply pre (pre-)smoothing steps (0,m) (0,m 1) (0,m 1). ( ) xk := xk + A 1. 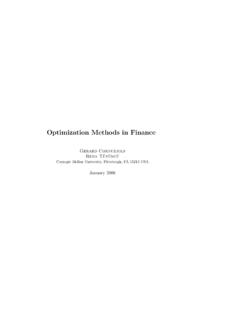 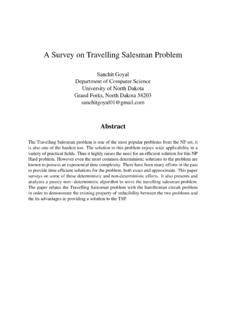 A Survey on Travelling Salesman Problem - …

1 Introduction The Travelling Salesman Problem (TSP) is a problem in combinatorial optimization studied in both, operations research and theoretical computer science. 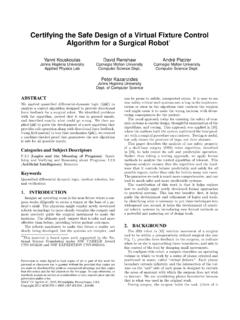 Certifying the Safe Design of a Virtual Fixture … 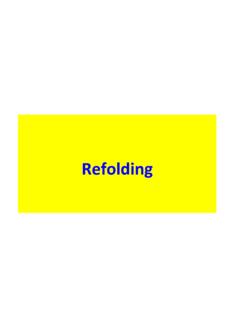