AMERICAN PSYCHOLOGICAL ASSOCIATION . 2009 ANNUAL CONVENTION. TORONTO, CANADA. AUGUST 8, 2009. PLENARY ADDRESS. THE PARADIGM SHIFT: THE RIGHT brain AND. THE RELATIONAL UNCONSCIOUS. ALLAN N. SCHORE. UCLA DAVID GEFFEN SCHOOL OF MEDICINE. Schore (Monitor, 2009): the emotional revolution . The emergence of noninvasive brain imaging technologies has opened the door to pinning down the fundamental connections among psychology, biology and emotion. Now the challenges are more conceptual than technical. We need an overarching theoretical model of development across the lifespan.. With the current flood of neuroscience data, only an interdisciplinary perspective can interpret that data effectively. That model will involve cross-collaboration between psychology and neuroscience, as well as researchers and clinicians.

1 AMERICAN PSYCHOLOGICAL ASSOCIATION . 2009 ANNUAL CONVENTION. TORONTO, CANADA. AUGUST 8, 2009. PLENARY ADDRESS. THE PARADIGM SHIFT: THE RIGHT brain AND. THE RELATIONAL UNCONSCIOUS. ALLAN N. SCHORE. UCLA DAVID GEFFEN SCHOOL OF MEDICINE. Schore (Monitor, 2009): the emotional revolution . The emergence of noninvasive brain imaging technologies has opened the door to pinning down the fundamental connections among psychology, biology and emotion. Now the challenges are more conceptual than technical. We need an overarching theoretical model of development across the lifespan.. With the current flood of neuroscience data, only an interdisciplinary perspective can interpret that data effectively. That model will involve cross-collaboration between psychology and neuroscience, as well as researchers and clinicians.

2 At this point, no theory can be purely PSYCHOLOGICAL .. This interdisciplinary perspective involves an integration of psychology, the study of the mind , neuroscience, the study of the brain , and biology, the study of the living organism. Until recently there was a seemingly immense divide between PSYCHOLOGICAL and biological sciences. New integrative paradigm is emerging as a result of more direct contact between PSYCHOLOGICAL and biological domains, and it bridges and overarches both. Why now? Over the last 2 decades science has finally undertaken a deeper study of emotion, essential adaptive processes that are by definition psychobiological. But over this same recent time period (commencing with the Decade of the brain ) neuroimaging technologies have allowed for studies of the rapid processing of cognitive and emotional information by brain systems in real time.

3 The shift in part is coming from cognitive neuro- science. But even moreso, affective neuroscience, social neuroscience, and developmental neuroscience are engines for paradigm shift. Paradigm shift: from explicit, analytical, conscious, verbal, rational left hemisphere to implicit, synthetic, integrative, unconscious, nonverbal, bodily-based emotional right hemisphere. Kuhn (The Structure of Scientific Revolutions,1970): paradigms consist of sets of propositions or hypotheses that order investigator's observations. When paradigm is overthrown, new one replaces it. Paradigm shift is by definition simultaneously expressed across scientific disciplines. Now seen in dramatic increase in interdisciplinary studies. But also in increasing communication of shared knowledge between disciplines.

4 Enhanced dialogue between psychology and sciences that border it, neuroscience, developmental science, psychiatry etc. Common goal of more complex models that integrate PSYCHOLOGICAL and biological realms. Intense dialogue also within psychology subdisciplines (developmental, physiological, experimental, social, clinical etc.). Paradigm shift may alter the self- definition of psychology. Definition of psychology (Shorter Oxford): The science of the nature, functioning and development of the human mind , including the faculties of reason, emotion, perception, communication . The branch of science that deals with the (human or animal) mind as an entity and its relationship to the body and to the social context, using observations of individuals in particular circumstances.

5 Latter half of 20th century major paradigm was behavioral. Then shifted into cognitive paradigm, and thus back into covert processes of human mind , where it emphasized studies of reason and perception. But in the last 15 years both science and the clinical professions have increasingly focused on emotion. In the current paradigm shift psychology is moving more directly into the problems of emotion, development, and communication, as well as the relationship of the mind to the body, individuals in particular circumstances, and to the social context. Here demonstrate paradigm shift by citing parallel presentations of actual voices of authors in different scientific disciplines. I will include journal citations to show the breadth of the paradigm shift over all fields.

6 Although I will cite individual studies and individual voices, they represent the fundamental themes of a body of research in each area. This interdisciplinary dialogue is converging on the unique functions of the emotion processing right brain . A large body of research now shows that the right brain hemisphere differs from the left in macrostructure, ultrastructure, physiology, neurochemistry, and behavior. Neuroscience experiments and clinical studies of the right brain have recently increased rapidly, fueling paradigm shift. The change in paradigm spans the theoretical and applied sciences, facilitating not only integrative research but more rapid translation of recent advances in science to more effective clinical models. Emotional revolution and the paradigm shift: deeper understanding of emotional processes central to current advances in more complex models of development, psychopathology, and psychotherapy.

7 Paradigm shift: conscious cognition to nonconscious processing of affect Ryan (Motivation and Emotion, 2007) on primacy of affective processes in the human experience: After three decades of the dominance of cognitive approaches, motivational and emotional processes have roared back into the limelight.. Thus, we are living in an epoch where motivation and emotion matter,' not only in an abstract theoretical sense, but also as they inform applied work in areas such as health-care, psychotherapy, education, sports, religion, or other domains.. Paradigm shift: from cognition to affect Panksepp ( brain and Cognition, 2003): Now that the cognitive revolution is gradually giving way to an emotion revolution, investigators are gradually exhibiting a new taste for the pursuit of what was once deemed scientifically unpursuable - an understanding of what affective processes really are.

8 Panksepp (Integr. Psych. Behav., 2008): The cognitive revolution, like radical neuro-behaviorism, intentionally sought to put emotions out of sight and out of mind . Now cognitive science must re-learn that ancient emotional systems have a power that is quite independent of neocortical cognitive processes.. Paradigm shift: irrational to adaptive emotion Lane (Psychosomatic Medicine, 2008): Primary emotional responses have been preserved through phylogenesis because they are adaptive. They provide an immediate assessment of the extent to which goals or needs are being met in interaction with the environment, and they reset the organism behaviorally, physiologically, cognitively, and experientially to adjust to these changing circumstances.. Paradigm shift: adaptive aspects of emotion: LeDoux (2000): The broader the range of emotions that a child experiences the broader will be the emotional range of the self that develops.

9 Dorpat (Psychoanal. Inquiry, 2001): In adults as well as children, emotions are the central medium through which vital information, especially information about interpersonal relations is transmitted and received.. Cacioppo & Decety (Perpsect. Psychol. Sci., 2009): It is now widely accepted that cognitive, affective, and behavioral processes often unfold unconsciously and that this unconscious processing is adaptive and frees up limited processing resources.. Paradigm shift: neurobiology of emotion Buklina (Neurosci. Behav. Physiology, 2005): The right hemisphere performs simultaneous analysis of stimuli the more diffuse' organization of the right hemisphere has the effect that it responds to any stimulus, even speech stimuli, more quickly and, thus earlier.

10 The left hemisphere is activated after this and performs the slower semantic analysis and synthesis the arrival of an individual signal initially in the right hemisphere and then in the left is more physiological.' . Paradigm shift: neurobiology of unconscious emotion Schutz (Neuropsych. Rev., 2005): The right hemisphere operates a distributed network for rapid responding to danger and other urgent problems. It preferentially processes environmental challenge, stress and pain and manages self- protective responses such as avoidance and escape. Emotionality is the right brain 's red phone,' compelling the mind to handle urgent matters without delay.. Sato & Aoki ( brain and Cognition, 2006): Right hemispheric dominance in processing of unconscious negative emotion. 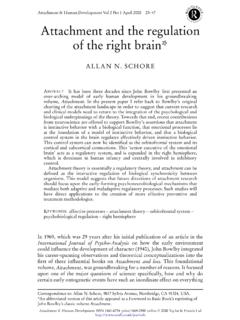 Attachment and the regulation of the right brain

Attachment and the regulation of the right brain* ALLAN N. SCHORE ABSTRACT It has been three decades since John Bowlby ”rst presented an over-arching model of early human development in his groundbreaking

Attachment, Regulations, Brain, Attachment and the regulation of 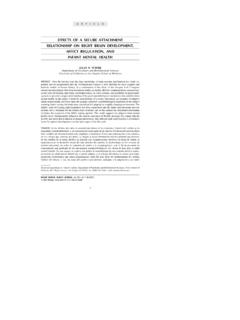 EFFECTS OF A SECURE ATTACHMENT … 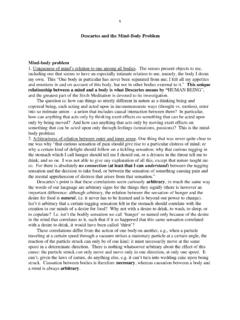 Descartes and the Mind-Body Problem - nyu.edu

1 Descartes and the Mind-Body Problem Mind-body problem 1. Uniqueness of mind’s relation to one among all bodies. The senses present objects to me, 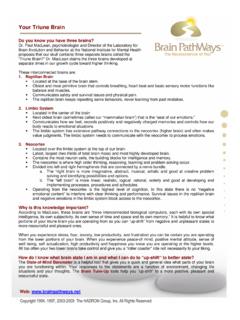 1 Do you know you have three brains? Dr. Paul MacLean, psychobiologist and Director of the Laboratory for Brain Evolution and Behavior at the National Institute for Mental Health 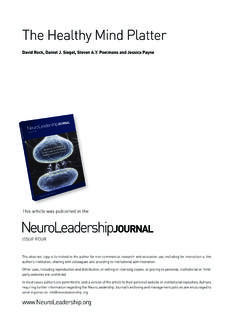 2 Jodie Gould is an award-winning writer and author of eight books, including Beautiful Brain, Beautiful You.Her articles have appeared in numerous national publications and web sites. 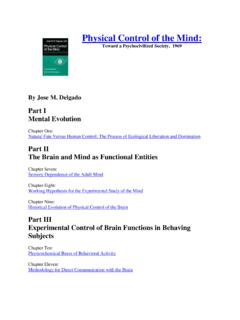 Physical Control of the Mind: Toward a Psychocivilized Society, 1969 By Jose M. Delgado Part I Mental Evolution Chapter One: Natural Fate Versus Human Control: The Process of Ecological Liberation and Domination 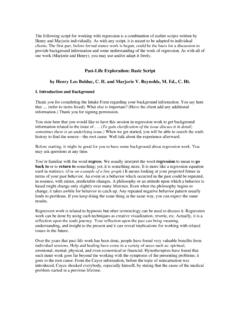 areas as it moves along. Let the relaxation spread to the hips, legs, and feet---all the way to the toes. That's great. Now, take another deep breath and realize that the whole body is becoming