However, for simplicity, RS-422 wil be used throughout the rest of this application report. Also, a suffix letter denotes the different revisions of the standard but various prefixes with the same suffix reference the same identical standard. RS-422was introduced to solve the limitation problems of single-endedstandards like TIA/EIA-232-E.

2 5 Types of Failsafe .. 4. 6 Example of Multi-Point Configuration .. 6. 7 A Point-to-Point RS-422 System With TransZorbs .. 6. 8 Example of Protected Connectors .. 7. 9 Stub Reflections .. 9. 10 Receiver ON/OFF Characteristics .. 9. TransZorbs is a registered trademark of General Semiconductor Industries !nc. All other trademarks are the property of their respective owners. SNLA044B January 2000 Revised April 2013 AN-1031 TIA/EIA-422-B Overview 1. Submit Documentation Feedback Copyright 2000 2013, Texas Instruments Incorporated Introduction 1 Introduction TIA/EIA-422-B (RS-422) is an industry standard specifying the electrical characteristics of a balanced interface circuit. Other prefixes are commonly used with the RS-422 standard. These include EIA, EIA/TIA, and RS; although previously correct, today TIA/EIA is the correct prefix.

3 However, for simplicity, RS-422. wil be used throughout the rest of this application report. Also, a suffix letter denotes the different revisions of the standard but various prefixes with the same suffix reference the same identical standard. RS-422 was introduced to solve the limitation problems of single-ended standards like TIA/EIA-232-E. Single-ended interfaces lack common-mode noise rejection capability; ideal for noisy environments. Also, data rates are usually limited to less than Mbps. A RS-422 interface may be implemented to overcome these limitations. A RS-422 driver can drive up to ten unit loads (4 k to circuit common is one unit load). The driver is capable of transmitting data across 4000 feet (recommended limit) of cable; but not at maximum data rates (see Figure 3 ). Standard RS-422 drivers are assured to source and sink a minimum 20 mA across a 100 load.

4 This corresponds to a minimum differential output voltage, VOD, of 2 V across the load (see Figure 1). Figure 1. Terminated Configuration The complement RS-422 receiver must be equal to or less than one unit load. This is represented by the slope of the shaded region in Figure 2. The operating range of the receiver is defined between 10 V and is represented by the shaded area in Figure 2. Figure 2. Receiver Operating Range Also, RS-422 receivers have a 200 mV threshold over the entire common mode range of 7 V. A. differential noise margin V is assured between the driver's differential output swing and the receiver's threshold. RS-422 drivers and receivers are designed for point-to-point and multi-drop configurations but not multi- point. For multi-drop configurations, a daisy chain is the recommended interface configuration.

5 Caution, at long distances or high data rates, termination is recommended to reduce reflections caused by a mismatch in the impedance of the cable and the impedance of the receiver's input. For further information, see Section 3. Significantly, the RS-485 differential interface standard is very similar to RS-422. However, there are differences that distinguish the two standards from one another; which include the output stage of the driver, the common mode range of the interface, the input resistance of the receiver, and the drive capability of the driver. For more details concerning the comparison of RS-422 and RS-485, see AN-759. Comparing EIA-485 and EIA-422-A Line Drivers and Receivers in Multipoint Applications (SNLA023). 2 Cable Length and Data Rate Cable length and data rate have an inverse affect on each other.

6 When operating at either the recommended maximum cable length or data rate, the other can not be obtained. For instance, it is not possible to operate at 4000 feet when operating at 10 Mb/s or vice-versa. 2 AN-1031 TIA/EIA-422-B Overview SNLA044B January 2000 Revised April 2013. Submit Documentation Feedback Copyright 2000 2013, Texas Instruments Incorporated Termination A chart displaying the recommended operational region of a typical RS-422 standard interface is shown in Figure 3. Other electrical interface standards operating regions are also shown for comparison. The curves were obtained from empirical data using a 24 AWG, copper, 16 pF/ft, twisted-pair cable parallel terminated with a 100 load. Figure 3. Cable Length Versus Data Rate 3 Termination Termination is recommended for use when designing a RS-422 interface that is considered to be a transmission line.

7 An interface is considered to be a transmission line if the propagation delay of the cable is greater than the transition (rise or fall) time of the signal. This is a time-domain analysis. The same is also true in frequency-domain. For clarification, the transition time for the time-domain analysis is measured from zero to one hundred percent of the transition. The rising or falling edge may be used for analysis, whichever edge is the fastest. Transmission lines may restrict the use of a multi-drop configuration and limit the maximum data rate of the RS-422 interface. Transmission line theory will not be discussed in this application report but is useful knowledge. For more details on transmission line theory, see AN-806 Data Transmission Lines and Their Characteristics (SNLA026), AN-807 Reflections: Computations and Waveforms (SNLA027), and AN-808 Long Transmission Lines and Data Signal Quality (SNLA028).

9 This also leads to a smaller differential output voltage and lower DC noise margins than with a series termination. Also, if the receiver has built-in failsafe circuitry, a known output can not be ensured with this type of termination scheme unless the receiver specifically says that it supports terminated failsafe. The cost associated with purchasing the one external component should also be considered. Other schemes exist to choose from and each type has its advantages and disadvantages. For more detailed information on parallel and other termination schemes, see AN-903 A Comparison of Differential Termination Techniques (SNLA034). SNLA044B January 2000 Revised April 2013 AN-1031 TIA/EIA-422-B Overview 3. Submit Documentation Feedback Copyright 2000 2013, Texas Instruments Incorporated Failsafe 4 Failsafe For typical RS-422 interfaces, open, terminated, and shorted input are the three types of failsafe to consider as shown in Figure 5.

10 A receiver with full failsafe protection assures a known receiver output for all three types failsafe conditions. Open Input Failsafe Open input failsafe is the condition when the receiver's output is known when its inputs are left open or floating. The driver is not connected but the receiver is powered. A receiver that provides failsafe for an open input condition, may provide failsafe for idle (driver's output idle) and TRI-STATE (driver's output disabled) conditions if the bus is not parallel terminated. Therefore, the output state of the receiver may be known for both idle and TRI-STATE bus conditions in some instances. A receiver is able to provide open input failsafe with internal pull-up and pull-down resistors, typically >50. k . Sometimes only one bias resistor is used on one input and the other input biased to a voltage reference point.

A Guide To RS-232 Communication With FX PLCs - inverter

The standard RS-232-C connector has 25 pins, 21 pins which are used in the complete standard. Many of the modem signals are not needed when a computer terminal is connected directly to a computer, and Figure 1 illustrates how some of the "spare" pins should be linked if not nee ded. Figure 1 also illustrates the pin numbering used in the original 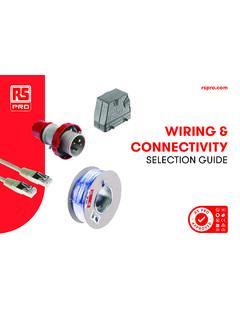 RS PRO offer you an extensive selection of cables, connectors and accessories for every wiring and connectivity application and environment. High . quality, professionally approved products, and a wide choice make the RS PRO range the perfect solution for your every need. PVC • Excellent insulating properties • Stable, robust, very durable

6 Non-Taxpay If you have 50 or more employees, or taxable wages in the current or preceding calendar year are $1,000,000 or more, file your Form TQ01C on the agency website.