3 To reduce deterioration while maintaining a constant sensitivity with a good linearity, a reference electrode (RE) is placed close to the WE. The reference electrode's purpose is to anchor the working electrode at the correct potential. In order for the RE to maintain a constant potential, no current should flow through it. The third electrode, the counter electrode (CE), conducts current into or out of the sensor cell. When the WE oxidizes carbon monoxide, the counter electrode reduces other molecules, such as oxygen to generate current. This current exactly balances the current generated at the WE. The ionic current between the working electrodes and counter is transported by the electrolyte. Gas Diffusion Barrier Working Electrode (WE). Reference Electrolyte Electrode Solution (RE). Counter Electrode (CE). Figure 1.

4 Typical electro -Chemical Sensor 3 Potentiostatic Circuit electro -chemical sensors require control circuitry to operate. The control circuitry is referred to as the potentiostatic circuit. Figure 2 shows a simplified potentiostatic circuit that is comprised of two amplifiers and one JFET transistor. There are small variations in the implementation of this circuit, but the function and the outcome are the same. 2 AN-1798 Designing with electro -Chemical Sensors SNOA514C April 2008 Revised May 2013. Submit Documentation Feedback Copyright 2008 2013, Texas Instruments Incorporated Amplifier Selection is Critical +. V. R4. R1 R2 R7. 10 k: 10 k: 10 k: 1 M: D G C2. C1 C2 10 nF. 10 nF 1 nF S Q1. - RE. LMP7721 - OUTPUT. CE WE R6 LMP7721. + SIGNAL. +. R3. 10 k: R5. 10 k: Figure 2. Potentiostatic Circuit The potentiostatic circuit's main purpose is to maintain a voltage between the reference electrode and the working electrode to control the electro -chemical reaction and to deliver an output signal proportional to the WE current.

5 When the sensor is exposed to the target gas, such as carbon monoxide, the reaction at the WE oxidizes the carbon monoxide to become carbon dioxide, which diffuses out of the sensor. Hydrogen ions and electrons are generated. The hydrogen ions migrate through the electrolyte towards the counter electrode. This process leaves a negative charge deposited on the working electrode. The electrons flow out from the working electrode through resistor R6 to the inverting input of the amplifier (U2). The amplifier is configured as a transimpedance amplifier, which converts the signal current from the WE into a voltage proportional to the applied gas concentration. Output Voltage = Isensor R4. For example, a 10 ppm carbon monoxide sample produces a typical signal current of approximately 500. nA, which gives an output voltage of 5 mV.

6 The hydrogen ions that have migrated toward the counter electrode will lift the potential of the RE and the WE. This small rise in potential at the RE is measured by the control amplifier (U1). The amplifier will sink or source adequate current to the CE to balance the current required by the working electrode. The P-type JFET is used as a switch to prevent the sensor from polarizing when the circuit has no power. If the sensor is polarized, it will take the sensor a long time to stabilize at equilibrium. The JFET is only active when the power is off and at this time it shorts the WE and RE to ensure that the working electrode is maintained at the same potential as the reference electrode. 4 Amplifier Selection is Critical The performance of the potentiostatic circuit is greatly dependent on the electrical parameters of the amplifiers chosen.

8 The inverting input of U1 that is connected to RE, cannot draw any significant current from the reference electrode. The LMP7721 ultra-low input bias amplifier will assure that the reference electrode will maintain constant potential by having less than 2 fA of bias current. SNOA514C April 2008 Revised May 2013 AN-1798 Designing with electro -Chemical Sensors 3. Submit Documentation Feedback Copyright 2008 2013, Texas Instruments Incorporated Amplifier Selection is Critical In addition, gas sensors have large capacitance, so significant currents can flow for small potential shifts;. therefore, the offset voltage and offset drift over temperature are critical. A precision amplifier such as the LMP7721 with a maximum input offset voltage of 180 V, and temperature drift of 4 V/ C will enable more accurate current measurements.

9 An amplifier with larger offset adds to the bias voltage of the sensor's working electrode causing more error. In conclusion, the majority of gas sensors are three-electrode electro -chemical cells that generate current that is linearly proportional to the gas concentration. The generated current is measured and converted to a voltage by the potentiostatic circuit. The potentiostatic circuit also provides the current to the counter electrode to balance the current required by the working electrode. The electrical specifications of the amplifiers used in the circuit should be precision with ultra-low bias current, such as TI's LMP7721. amplifier. 4 AN-1798 Designing with electro -Chemical Sensors SNOA514C April 2008 Revised May 2013. Submit Documentation Feedback Copyright 2008 2013, Texas Instruments Incorporated IMPORTANT NOTICE.

10 Texas Instruments Incorporated and its subsidiaries (TI) reserve the right to make corrections, enhancements, improvements and other changes to its semiconductor products and services per JESD46, latest issue, and to discontinue any product or service per JESD48, latest issue. Buyers should obtain the latest relevant information before placing orders and should verify that such information is current and complete. All semiconductor products (also referred to herein as components ) are sold subject to TI's terms and conditions of sale supplied at the time of order acknowledgment. TI warrants performance of its components to the specifications applicable at the time of sale, in accordance with the warranty in TI's terms and conditions of sale of semiconductor products. Testing and other quality control techniques are used to the extent TI deems necessary to support this warranty. 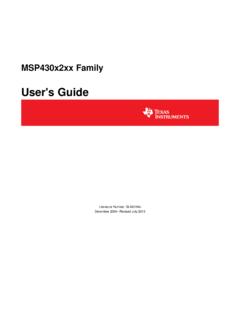 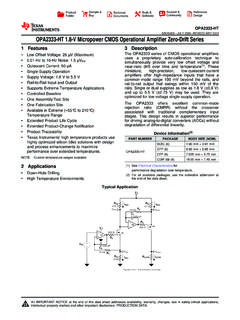 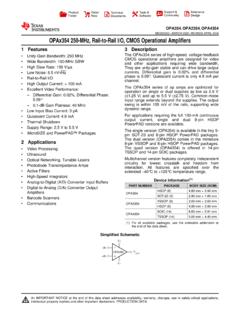 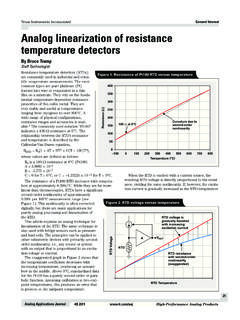 SPRU625L—August 2012 API Functional Overview 9 Submit Documentation Feedback www.ti.com Naming Conventions 1.2 Naming Conventions The format for a DSP/BIOS operation name is a 3- or 4-letter prefix for the module that contains the 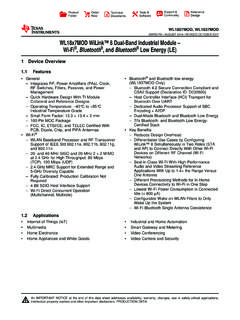