an inspiring place to do business - Wesgro.co.za

5 Foreword by the chairperson This past year was a trying time for South Africa's economy. At a national level, the policy uncertainty, poor leadership and a deteriorating investment climate impacted negatively on every province in South Africa. Within this context, the work of Wesgro, the official tourism, trade and investment promotion agency for Cape Town and the Western Cape, has become even more critical. Indeed, despite this downturn emerging from national realities, outside of the control of a province or a city, it was essential that the Agency perform beyond expectation, demonstrating that there remain pockets of hope in the country where the fundamentals that allow for economic growth and job creation remain strong, and where investment is not only appreciated, but rigorously sought. We needed to do this not only to give life to our legislative mandate, and to ensure the excellent record of securing high levels of tourism, trade and investment was maintained, but also because we realised that if the Agency did more than its bit, then Cape Town and the Western Cape's growing economy would make a much bigger contribution toward enabling South Africa to weather the economic storm.

6 On every measure, Wesgro has done remarkably well in ensuring this key objective was met. Despite the challenging climate, Wesgro has secured more investment than the year before, exceeding its targets by some way. In fact, the team recorded the single biggest investment since 2011, with Pegas Novens investing more than R1, 3bn in Atlantis. Tourism has also again demonstrated why it remains at the heart of the Western Cape's economic strategy. As just recently an- nounced by South African Tourism, both foreign and domestic arrivals increased by double-digits in 2016. Foreign tourists alone contributed over R18bn to the provincial economy. On behalf of the board of members, I want to thank every staff member who worked even harder than before to help Cape Town and the Western Cape's economy perform beyond expectation. We have related the targets to outputs rather than inputs and we stretched the targets and still you achieved thank you.

7 It did not come from just repeating what was done before. It took leadership, collaboration and determination. And this is precisely what needs to be replicated if we are to build on this success over the next financial year. On leadership, I want to particularly thank the vision and hard-work of Premier Helen Zille, Executive Mayor Patricia De Lille, and Minister Alan Winde. Your unwavering commitment to growing the economy has created both the space and the motivation for the Wesgro team to work with determination in achieving its targets. This leadership is nowhere more evident than on the missions that the Premier, Executive Mayor and Minister have led. Be it ensuring that the province gets the best deal out of Brexit, or travelling to the United States of America to secure a direct flight to the Cape, we have been led from the front, and for this we are truly grateful. On collaboration, I want to thank every single partner, both provincial and national, who have worked together with Wesgro over the past year to help secure these achievements.

8 The Cape Town Air Access project, which now also includes South African Tour- ism on the steering committee, remains a model of how all levels of government can work together to ensure the best possible outcomes for the region and the country. With now more than 10 direct flights secured, and an equal number of flight expansions, the proof has most certainly been in the pudding. We look forward to replicating this collaborative model in the year ahead, with the launch of the InvestSA Western Cape One-Stop- Shop. This Investor Centre has been project managed by Wesgro, and is now set to launch in August 2017. Funded and supported by all three levels of government, and by the private sector, it will send a clear message to investors around the world that at this centre in the Western Cape we are working together with all three spheres of Government and we are open for business . Lastly, on determination, I want to thank our Chief Executive Officer, Tim Harris, and the members of the Wesgro board, for their hard-work, passion and enthusiasm.

9 When one is surrounded by a team that doesn't accept failure as an option, the task becomes so much easier to achieve. I encourage you to continue on this road, and build on this past year's success. Because if we do so, we can send a loud and clear message to the world that in Cape Town and the Western Cape no challenge is too big, no obstacle unassailable. Brian Figaji, Chairperson Wesgro 31 July 2017. 10. 4. chief executive officer's overview As Cape Town and the Western Cape's official tourism, trade and investment promotion agency, Wesgro plays a key role in shoring up confidence in our region, and in our country. The real test of an agency like ours comes when sentiment shifts in the wrong direction. When the reasons not to invest in your region, or buy your products, or visit your attractions appear to mount up. In this regard, 2016/17 was a year when the Wesgro team's ability to deliver was tested across the board, but I am pleased to report that the Agency passed with flying colours.

10 Together with our partners in the Western Cape Provincial Government, the City of Cape Town, and the Cape's private sector, we have succeeded in shoring up our region's reputation as a competitive hub for business and tourism on the African continent. We have also deepened connections with the rest of Africa and the world, helping to expand our network of non-stop flights to Cape Town International Airport through our Air Access project. And by taking the message of our region's competitiveness to more investors, buyers and tourists around the world by embarking on more than sixty missions in the year. The investment Promotion Unit (IPU) secured a total of 12 investment projects, to the value of R2,1bn, against a target of R1 R1,8bn. This helped create 696 jobs and grow and diversify the Western Cape's industrial base. The Agribusiness investment Unit (AIU) realised three investment projects, to the value of R735m, against a target of R237 R315m. 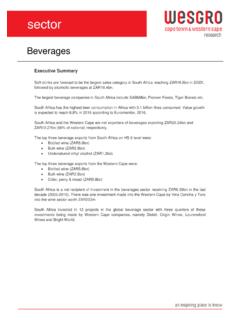 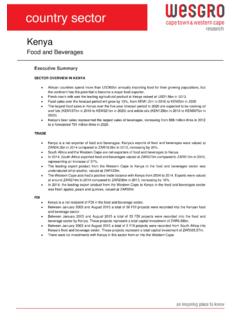 4 Kenya is the East African Community (EAC)'s economic hub and comfortably its most dynamic consumer market. It is expected that robust growth in Kenya's economy will drive positive growth in the food industry. 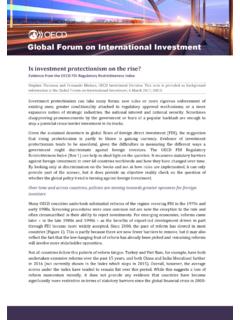 Global Forum on International Investment 2017 Is investment protectionism on the rise? Evidence from the OECD FDI Regulatory Restrictiveness Index 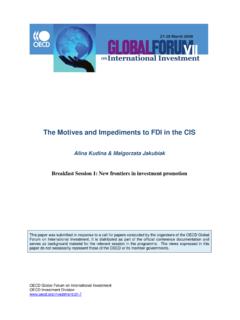 The Motives and Impediments to FDI in the CIS - …