An Introduction to Administrative Law

C HAPTER 1. An Introduction to Administrative Law I. Overview Administrative law is the study of governance. While Congress creates authority, the President enforces that authority, and courts confine or discipline the exercise of that authority, it is agencies that govern. That said, the starting point for many Administrative law cases is an act of Congress that allows the agency to function. It is axiomatic Bottom Line that Administrative agencies may issue Federal, state, and local administra- regulations only pursuant to authority tive agencies are the vital, hands-on delegated to them by Congress. Am. forces of government in the United Library Ass'n v. FCC, 406 689, 691 States. ( Cir. 2005). The starting point for judicial review of and, where appropriate, deference to agency action is an assessment of the congressional delegation of Administrative authority.

An Introduction to Administrative Law cHaPter 1 I. Overview Administrative law is the study of governance. While Congress creates authority, the President enforces that authority, and courts confine or discipline

1 C HAPTER 1. An Introduction to Administrative Law I. Overview Administrative law is the study of governance. While Congress creates authority, the President enforces that authority, and courts confine or discipline the exercise of that authority, it is agencies that govern. That said, the starting point for many Administrative law cases is an act of Congress that allows the agency to function. It is axiomatic Bottom Line that Administrative agencies may issue Federal, state, and local administra- regulations only pursuant to authority tive agencies are the vital, hands-on delegated to them by Congress. Am. forces of government in the United Library Ass'n v. FCC, 406 689, 691 States. ( Cir. 2005). The starting point for judicial review of and, where appropriate, deference to agency action is an assessment of the congressional delegation of Administrative authority.

2 Adams Fruit Co. v. Barrett, 494 638, 649 (1990). Courts assessing agency action are obliged first to determine whether the will of Congress has been obeyed. Skinner v. Mid-America Pipeline Co., 490 212, 218 (1989) (cit- ing Yakus v. United States, 321 414, 426 (1944)). If you are wondering why we did not start with better known cases pertaining to delegation, fear not they lie ahead in this text. We refer you to the above cases not because they are unique or precedent setting but because they reflect the common denominator in this field agencies are the active governors, but only of the power given them by the legislature. On a day-to-day basis, it is the agencies that have the capacity and authority to reach out and touch us all. It is the Internal Revenue Service, not Congress, that reaches into the pockets of private citizens and businesses.

3 It is the Occupational Safety and Health Administration, not a congressional oversight committee, that assesses workplace safety. It is the Food and Drug Administration that approves and sets standards for all pharmaceuticals. It is the Nuclear Regulatory Com- mission that has comprehensive licensing authority for the operation of nuclear 2 A DMINISTRATIVE L AW A Contemporary Approach power plants and on and on. From the outset of the modern Administrative state, this exercise of power came with acknowledged risks. Regarding the advent of modern Administrative agency power, Roscoe Pound noted that the revival of executive justice can be seen as a partial reversion[] to justice without law.. Roscoe Pound, 2 Jurisprudence 425, cited in Michael Lassiter, Comparative Readings of Roscoe Pound's Jurisprudence, 50 Am.

4 J. Comp. L. 719, 745 (2002). Unelected Administrative officials can announce standards that interpret stat- utes and shift significantly interests and entitlements, and courts reviewing such standards may be required to defer to that agency pronouncement or at least respect the decision of the agency even if a court determines the standards are far from ideal. Does that strike you as justice without law? For some different perspectives on this, see Eric Biber & Frank B. Cross, Two Sides of the Same Coin: Judicial Review of Administrative Agency Action and Inaction, 26 Va. Envtl. 461. (2008); Frank B. Cross, Pragmatic Pathologies of Judicial Review of Administrative Rulemaking, 78 Rev. 1013 (2000); Anuradha Vaitheswaran & Thomas A. Mayes, The Role of Deference in Judicial Review of Agency Action: A Comparison of Federal Law, Uniform State Acts, and the Iowa APA, 27 J.

5 Nat'l Ass'n L. Jud. 402. (2007), and Rachel E. Barkow, The Ascent of the Administrative State and the Demise of Mercy, 121 Harv. L. Rev. 1332, 1334-35 (2008). Professor Barkow notes that the rise of the Administrative state has made unchecked discretion an anomaly in the law, and a phenomenon to be viewed with suspicion. The expansion of the Administrative state has showcased the dangers associated with the exercise of discretion.. With the rise of Administrative law, our legal culture has come to view unreviewable discretion to decide individual cases as the very definition of lawlessness.. Not only are federal, state, and local agencies involved in regulating, Key Concept guiding, or limiting behavior, they Regardless of the field in which one practices, Administrative agency ac- are also the focal point for much of tion is likely to play a central role.

6 The practice of law. Administrative This is true in criminal law, where law, properly understood, is of para- much of the parole and post-con- viction practice is Administrative . It mount importance. Its enterprise bears is also true in corporate law, where considerable credit or blame for the agency actors play a decisive role very structure, operation, and even on issues such as taxes, employ- the ultimate efficacy of governance.. ment, and securities regulation. En- vironmental law, international law, Christopher Edley, Jr., The Government healthcare law, energy regulation, Crisis, Legal Theory, and Political Ideol- telecommunications, public interest ogy, 41 Duke 561, 562 (1991). Pro- practice, and virtually all other spe- cializations require an understand- fessor Edley notes further that those ing of the way Administrative agen.

7 Dissatisfied with the evolutionary cies function. direction of Administrative law must C HAPTER 1 An Introduction to Administrative Law 3. recognize that doctrinal change is part of a larger ideological and theoretical whole. As noted above, this is about both the practice of law and governance. See Ruhl et al., Symposium, The Coevolution of Administrative Law with Everything Else, 28 Fla. St. Rev. 1. (2000); Nathan Block & Robin Smith Houston, Toward a Responsible System Bottom Line of Regulating Practice at Administrative Notwithstanding the dominant role Agencies: Administrative Agencies and agencies can play, judicial review by the Changing Definition of the Practice courts provides the primary means of Law, 2 Tex. Tech Admin. 251 by which Administrative law is stud- ied.

8 Furthermore, it is judicial deci- (2001). sions that shape the contours of the Administrative state. For that reason, From the outset, you should be heavy emphasis is placed on con- aware that while the powers of gov- ventional case analysis both in this casebook and in the field. ernment might be separated into three branches, nothing happens in isola- tion. For a review of the relationship between the executive, legislative, judicial branches and the agencies, see William D. Araiza, Judicial and Legislative Checks on Ex Parte OMB Influence Over Rulemak- ing, 54 Admin. L. Rev. 611 (2002); Steven Croley, White House Review of Agency Rulemaking: An Empirical Investigation, 70 U. Chi. L. Rev. 821 (2003); Jonathan R. Macey, Organizational Design and the Political Control of Administrative Agencies, 8.

9 Econ. & Org. 93 (1992); Mark Seidenfeld, The Psychology of Accountability and Political Review of Agency Rules, 51 Duke 1059 (2001). The primary focus of the vast majority of law school courses in administra- tive law, of necessity, is procedural. See Kristin Booth Glen, Thinking Out of the Bar Exam Box: A Proposal to MacCrate Entry to the Profession, 23 Pace L. Rev. 343, 362 (2003) (urging wisely we believe that law schools require admin- istrative law). As lawyers, we need to understand how agencies function, what rules they follow, and what power they possess in relation to subsequent judicial action. These inquiries require an assessment of how agency action is affected by constitutional constraints, how agencies maintain order in proceedings involving numerous conflicting interests, how agencies formulate rules and regulations, and how they exercise their power to search and investigate.

10 See Robert L. Rabin, Fed- eral Regulation in Historical Perspective, 38 Stan. L. Rev. 1189 (1986) (setting out the historical context of the field), and on the role the executive plays in shaping the agency state; Elena Kagan, Presidential Administration, 114 Harv. L. Rev. 2245. (2001); Martin S. Flaherty, The Most Dangerous Branch, 105 Yale 1725 (1996);. Abner S. Greene, Checks and Balances in an Era of Presidential Lawmaking, 61 U. Chi. L. Rev. 123 (1994); and Steven G. Calabresi, Some Normative Arguments for the Unitary Executive, 48 Ark. L. Rev. 23 (1995). 4 A DMINISTRATIVE L AW A Contemporary Approach This predominant focus on process comes at a price; most Administrative law courses can devote only limited time to delve into the dynamics of whether and why activities and behaviors should be regulated. 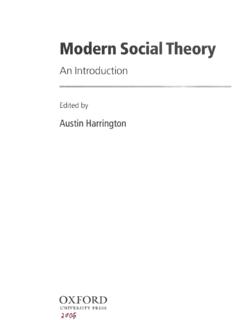 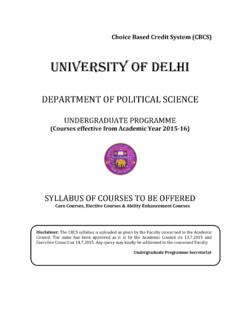 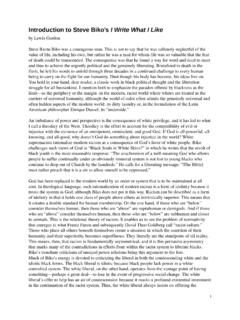 Introduction to Steve Biko’s I Write What I Like

Introduction to Steve Biko’s I Write What I Like by Lewis Gordon Steve Bantu Biko was a courageous man. This is not to say that he was callously neglectful of the