An Overview of Growing Income - OECD.org

2 1. The big picture: inequality on the rise in most OECD countries Over the two decades prior to the onset of the global economic crisis, real disposable household incomes increased by an average a year in OECD countries. In a large majority of them, however, the household incomes of the richest 10% grew faster than those of the poorest 10%, so widening Income inequality. Differences in the pace of Income growth across household groups were particularly pronounced in some of the English-speaking countries, some Nordic countries, and In Japan, the real incomes of those at the bottom of the Income ladder actually fell compared with the mid-1980s (Table 1). In OECD countries today, the average Income of the richest 10% of the population is about nine times that of the poorest 10% a ratio of 9 to 1.

3 However, the ratio varies widely from one country to another. It is much lower than the OECD average in the Nordic and many continental European countries, but reaches 10 to 1 in Italy, Japan, Korea, and the United Kingdom; around 14 to 1 in Israel, Turkey, and the United States; and 27 to 1 in Mexico and Chile. The Gini coefficient, a standard measure of Income inequality that ranges from 0 (when everybody has identical incomes) to 1 (when all Income goes to only one person), stood at an average of in OECD countries in the mid-1980s. By the late 2000s, however, it had increased by almost 10% to Significantly, it rose in 17 of the 22 OECD countries for which long-term data series are available (Figure 1), climbing by more than 4 percentage points in Finland, Germany, Israel, Luxembourg, New Zealand, Sweden, and the United States.

4 Only Turkey, Greece, France, Hungary, and Belgium recorded no increase or small declines in their Gini coefficients. Income inequality followed different patterns across the OECD countries over time (Figure 2). It first started to increase in the late 1970s and early 1980s in some English-speaking countries, notably the United Kingdom and the United States, but also in Israel. From the late 1980s, the increase in Income inequality became more widespread. The latest trends in the 2000s showed a widening gap between rich and poor not only in some of the already high- inequality countries like Israel and the United States, but also for the first time in traditionally low-inequality countries, such as Germany, Denmark, and Sweden (and other Nordic countries), where inequality grew more than anywhere else in the 2000s.

5 At the same time, Chile, Mexico, Greece, Turkey, and Hungary reduced Income inequality considerably . often from very high levels. There are thus tentative signs of a possible convergence of inequality levels towards a common and higher average level across OECD Increases in household Income inequality have been largely driven by changes in the distribution of wages and salaries, which account for 75% of household incomes among working-age adults. With very few exceptions (France, Japan, and Spain), the wages of the 10% best-paid workers have risen relative to those of the 10% lowest paid. This was due to both Growing earnings' shares at the top and declining shares at the bottom, although top earners saw their incomes rise particularly rapidly (Atkinson, 2009).

7 Average annual changes are calculated over the period from 1985 to 2008, with a number of exceptions: 1983 was the earliest year for Austria, Belgium, and Sweden; 1984 for France, Italy, Mexico, Turkey;. 1986 for Finland, Luxembourg, and Norway; 1987 for Ireland; 1988 for Greece; 1991 for Hungary; 1992 for the Czech Republic; 1995 for Australia and Portugal; and 1996 for Chile. The latest year for Chile was 2009; for Denmark, Hungary, and Turkey it was 2007; and for Japan 2006. Changes exclude the years 2000 to 2004 for Austria, Belgium, Ireland, Portugal and Spain for which surveys were not comparable. 1. Information on data for Israel: Source: OECD Database on Household Income Distribution and Poverty. 1 2 The 2008 OECD report Growing Unequal? highlighted that inequality in the distribution of market incomes gross wages, Income from self-employment, capital Income , and returns from savings taken together increased in almost all OECD countries between the mid-1980s and mid-2000s.

8 Changes in the structure of households due to factors such as population ageing or the trend towards smaller household sizes played an important role in several countries. Finally, Income taxes and cash transfers became less effective in reducing high levels of market Income inequality in half of OECD countries, particularly during the late 1990s and early 2000s. While these different direct drivers have been described and analysed in depth and are now better understood, they have typically been studied in isolation. Moreover, while Growing dispersion of market Income inequality particularly changes in earnings inequality has been identified as one of the key drivers, the question remains open as to DIVIDED WE STAND: WHY INEQUALITY KEEPS RISING OECD 2011 23.

10 1 2 the major underlying, indirect causes of changes in inequality. Is globalisation the main culprit? To what degree were changes in labour and product market policies and regulations responsible? Do changes in household structure matter? Finally, what can governments do to address rising inequality? These and other questions are addressed in detail in the present report which identifies key drivers and possible policy measures for tackling inequality trends among the working-age population. Globalisation has been much debated as the main cause of widening inequality. From a political point of view, protectionist sentiments have been fuelled by the observation that the benefits of productivity gains in the past two decades accrued mainly in some cases, exclusively to highly skilled, highly educated workers in OECD countries, leaving people with lower skills straggling. 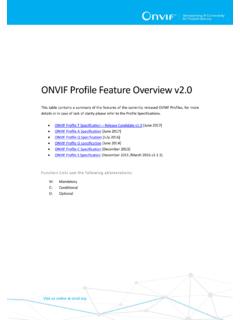 Visit us online at onvif.org ONVIF Profile Feature Overview v2.0 This table contains a summary of the features of the currently released OVNIF Profiles, for more

An Overview of the C++ Programming Language