An Overview of Liquid Chromatography-Mass Spectroscopy ...

5 *Corresponding address: Liquid - Liquid chromatography (paper partition Dr. S Parasuraman chromatography , column chromatography ). Faculty of Pharmacy, AIMST University, Bedong 08100, Kedah, Malaysia. 2. Based on the principles of separation and type of E-mail: chromatographic method DOI: Adsorption chromatography : The mobile ( Liquid Pharmaceutical Methods Vol 5 Issue 2 Jul-Dec 2014 47. Parasuraman, et al.: An Overview of LC-MS instrumentation or gaseous) phase is adsorbed into the surface of a Affinity chromatography : This method is most selective stationary solid phase. The separation of the compound and used to separate the antibodies, proteins and enzymes is based on affinity towards stationary phase.

7 chromatography is carried used to separate optical isomers (levo and dextro forms). out as described for adsorption column chromatography . of the Partition of component of sample between the mobile 3. Based on different type of analytical method phase (sample) and stationary phase ( Liquid on solid support) retards the elution of some components of Capillary electrophoresis sample which gives the basis for separation. chromatography with conventional detectors Ion exchange chromatography : The principle involved for this method is reversible exchange of ions, Gas chromatography (GC). between the ions present in the solution (mobile Liquid chromatography phase) and ion exchange resin (stationary solid phase).

10 The combination of Gas chromatography and and reverse phase constricts with non-polar stationary mass Spectrometry (MS) was first reported in 1958 and made phase with polar solvent/mobile phase. Normal phase available commercially in Combination of LC with MS mode not widely used in biomedical research and not is an important development in the history of chromatography advisable for pharmaceutical applications since most of (1980s). mass spectrometry in LC-MS helps to determine the the drug are polar in nature and takes longer time to be elemental composition and structural elucidation of a elute and detected. Reverse phase mode have wide range of pharmaceutical application. 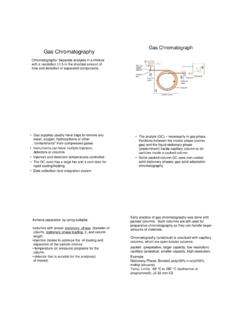 Gas Chromatography Chromatography: Separate analytes in a mixture with a resolution ≥1.5 in the shortest amount of time and detection of separated components. 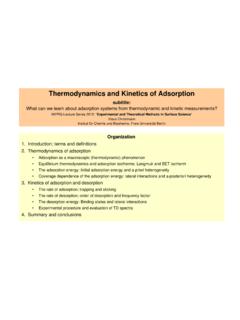 Thermodynamics and Kinetics of Adsorption