Analog to Digital ADC and Digital to Analog DAC Converters

Session 1559. Analog to Digital (ADC) and Digital to Analog (DAC) Converters M. Rabiee Eastern Kentucky University Introduction: Electric voltage and current signals are often referred to as Analog signals. Analog signals must be converted to Digital signals prior to input into computers. Analog to Digital Converters (ADCs) are used to convert Analog signals to Digital signals. Inversely, the computer output that is in Digital form must sometimes be converted to an Analog signal prior to input to an electronic or electrical device. Digital to Analog Converters (DACs) are used to perform this operation. In this paper we will examine important characteristics associated with ADC/ DAC Converters . In addition, we will explain how to specify a converter to meet the requirements of a specific system. We will also state and describe different types of ADC / DAC Converters . Binary-weighted, and R- 2R Ladder type DAC circuits will be displayed and analyzed.

1 Session 1559. Analog to Digital (ADC) and Digital to Analog (DAC) Converters M. Rabiee Eastern Kentucky University Introduction: Electric voltage and current signals are often referred to as Analog signals. Analog signals must be converted to Digital signals prior to input into computers. Analog to Digital Converters (ADCs) are used to convert Analog signals to Digital signals. Inversely, the computer output that is in Digital form must sometimes be converted to an Analog signal prior to input to an electronic or electrical device. Digital to Analog Converters (DACs) are used to perform this operation. In this paper we will examine important characteristics associated with ADC/ DAC Converters . In addition, we will explain how to specify a converter to meet the requirements of a specific system. We will also state and describe different types of ADC / DAC Converters . Binary-weighted, and R- 2R Ladder type DAC circuits will be displayed and analyzed.

2 Parallel Comparator or Flash, Dual Slope, and Successive Approximation type ADC circuits will be displayed and analyzed. We will explain extensively the advantage / disadvantage criteria associated with each type of ADC or DAC Converters . Finally, two computer interfacing laboratory assignments will demonstrate the constructions of the R-2R Ladder type DAC, and Successive Approximation type ADC Converters . Digital to Analog converter (DAC) Characteristic: When we select a Digital to Analog converter (DAC) chip for an application, we must consider three characteristic associated with a DAC. First, resolution or step size defines the smallest voltage or current change possible for the DAC output signal. For example, an 8-bit DAC. that generates a maximum output voltage of 5 volts has a step size or resolution of (5V / 2 8 ) = mV. Sometimes, the resolution is stated in the percentage value. For the 8-bit DAC, the percent resolution is (1 / 2 8 ) x 100 = Settling time is the time required for the DAC output to settle to of its new value.

3 Typical settling time for a commercial DAC is 300 nanoseconds. Accuracy is used to state the percentage of actual output of a DAC to expected output. Usually the accuracy is 50% of the step size. For the 5 V, 8-bit DAC the accuracy is mV. This implies that the maximum output is guaranteed by the DAC manufacturer to be within and Digital to Analog converter (DAC) types: There are two methods of constructing a DAC; Binary Weighted type, and R-2R Ladder type. Figure 1 displays an 8-bit binary weighted type DAC circuit. The output voltage for a binary weighted DAC is found using the following equation. V OUT = ( V REF ) * ( R F / R ) * ( D7 / 2 0 + D6 / 2 1 + .. + D1 / 2 6 + D0 / 2 7 ). Note that the switches represent transistors that can be opened ( , operates in turned off, or open collector to emitter state), or closed ( , operates in turned on, or saturated state). Page Session 1559. Figure 1.

4 8-bit, Binary Weighted Type DAC. The advantage of a binary weighted DAC circuit is due to its simplistic construction with fewer electronic components. However, the disadvantage is that as the number of input bits increases, the value of the current on the least significant bit (D0) branch will decrease. This reduction in current value will eventually be significant enough to distort the current signal in the branch that has the switch for the least significant bit. To solve this problem, most DACs are constructed using R-2R Ladder type circuits. Figure 2 displays an 8-bit R-2R Ladder type DAC. circuit. In order to analyze the circuit, assume that all bits except one are connected to the ground. Then, equivalent resistance is calculated by realizing that two 2R resistors are in parallel, which will generate an equivalent value of R. Next, this equivalent resistor is in series with another R to produce an equivalent resistance of 2R.

5 This process continues until the number of resistors in the circuit are reduced to a couple of 2R resistors. Figure 3 displays the equivalent circuit when D7 is connected to +5V. Now we can find the Thevenin Equivalent Circuit of the section to the left of the Operational Amplifier (Op-Amp), and proceed to calculate the output voltage generated by the associated bit. The following equation represents the DAC output voltage for the R-2R Ladder type circuit. V OUT = ( V REF ) * ( R F / 2R ) * ( D7 / 2 0 + D6 / 2 1 + .. + D1 / 2 6 + D0 / 2 7 ). Page Session 1559. Figure 2. 8-bit, R-2R Type Digital to Analog converter . Figure 3. R-2R Equivalent Circuit when only bit seven (D7) is on. Digital to Analog converter (DAC) Lab Assignment: Students use the electronic circuit simulation packages available [1,2] in the computer lab to analyze the binary weighted and R-2R Ladder type circuits. In addition, a lab assignment illustrates the construction of a R-2R Ladder type DAC, and the use of this circuit to generate waveforms.

6 Figure 4 shows the wiring diagram of the DAC lab assignment. We have used a computer interface card to connect the DAC circuit to a personal computer. A complete description of the interface card, and its associated address decoder circuit are in a previously published paper [3]. The Y1 output of the 74LS138, three-to-eight decoder chip represents address 301 Hex =769. Decimal. Once the circuit is wired and connected to the computer and oscilloscope, the program listed Page in Appendix A is used to check the validity of the value of each DAC bit. Finally, the programs Session 1559. listed in Appendix B are used to generate different types of waveforms. The MC1408 Digital to Analog converter chip manufactured by Motorola [4] is a typical 8-bit DAC chip. Figure 5 shows the wiring diagram of the MC1408 DAC chip[5]. BEN'. Figure 4. Wiring Diagram of R-2R Ladder Type DAC Lab Assignment Page Figure 5.

7 MC1408 Digital to Analog converter (DAC). Session 1559. Analog to Digital converter (ADC): When selecting an Analog to Digital converter (ADC) chip for an application, three characteristics must be considered. Similar to selecting a DAC, these characteristics are; number of bits, accuracy, and speed. There are three different methods used for constructing Analog to Digital Converters . These ADC types are; Parallel Comparator or Flash type, Dual-Slope type, and Successive Approximation type. Figure 6 displays a 3-bit, flash type ADC circuit. The voltage divider provides eight reference voltages on the negative poles of the operational amplifiers. The unknown input voltage is compared to each one of the reference voltages. If the input voltage is greater than any one of the reference voltages, the associated Op-Amp will be saturated to its positive supply voltage level. The eight-to-three encoder will generate an appropriate three bit binary word according to the inputs A0.

8 Through A7. For example, assume A4 is the only input to the encoder that is set. That would mean that the input voltage is , and the output binary number will be 100. The advantage of a Flash type ADC is its instantaneous speed. The Flash type ADC is expensive due to the large numbers of OP-Amp devices contained therein. For example, an 8-bit flash type ADC requires 2 8 -1 = 255 Op-Amps. Flash type ADCs are used in special applications such as systems used by the military or NASA. Page Figure 6. Three-bit, Flash Type Analog to Digital converter Circuit Session 1559. In the Dual Slope ADC type, a capacitor is connected to input voltage and allowed to charge up for a fixed amount of time. Then, the capacitor is connected to the ground and allowed to discharge. The time required for the capacitor to discharge is calibrated to reflect the value of the input voltage. Figure 7 illustrates the operation of the Dual Slope type ADC.

9 These type of ADCs are very slow, and are usually found in electronic voltmeters. Figure 7. Operation of the Dual-Slope Type Analog to Digital converter Figure 8 displays a block diagram of a successive approximation ADC. In the successive approximation ADC, the output of a comparator is connected to the input of a special counter register called a Successive Approximation Register (SAR). Page Session 1559. The OP-Amp comparator is used to compare the unknown input voltage to the output of a DAC. The successive binary numbers generated by the SAR are fed into the DAC. Upon receiving an active signal from the Start Conversion line, the SAR will turn its Most Significant Bit (MSB). on. If the output from the comparator is low, the bit will be turned off, otherwise the MSB will be kept on. Next, the second highest bit on the SAR is turned on, and the decision is made to keep the bit on, or turn it off. 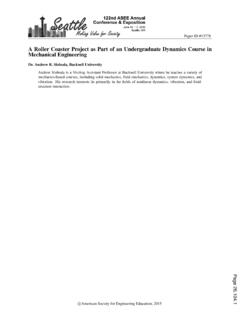 A Roller Coaster Project as Part of an Undergraduate ... 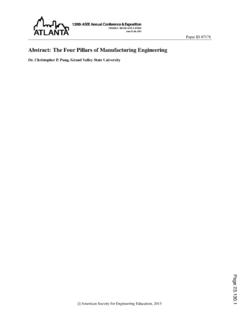 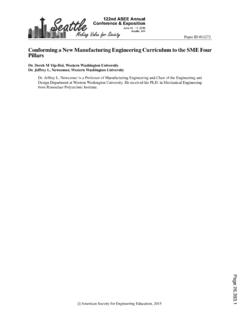 From the standpoint of the SME four pillars, most of the additional depth is in the areas of Materials and Manufacturing Processes and Product Tooling and Assembly Engineering , and there is a much stronger emphasis on composites manufacturing. 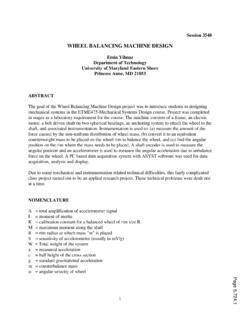 The goal of the Wheel Balancing Machine Design project was to introduce students to designing mechanical systems in the ETME475-Mechanical Systems Design course. Project was completed in stages as a laboratory requirement for the course. The machine consists of a frame, an electric 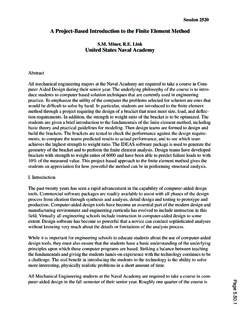 A Project Based Introduction To The Finite Element Method 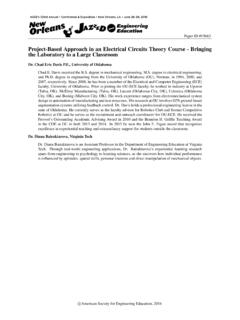 Electrical Circuits is a required course for most undergraduate engineering major students . This course is often taught in a traditional lecture-based approach, which makes student engagement difficult. 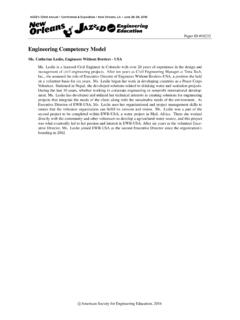 Volunteer. Stationed in Nepal, she developed solutions related to drinking water and sanitation projects. During the last 30 years, whether working in corporate engineering or nonproﬁt international develop-ment, Ms. Leslie has developed and utilized her technical interests in creating solutions for engineering 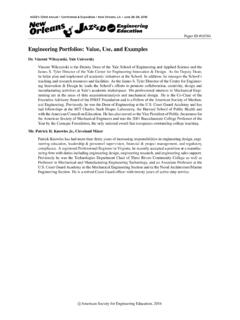 Engineering Portfolios: Value, Use, and Examples

manufacturing activities at Yale’s academic makerspace. His professional interests in Mechanical Engi-neering are in the areas of data acquisition/analysis and mechanical design. He is the Co-Chair of the Executive Advisory Board of the FIRST Foundation and is a Fellow of the American Society of Mechan-ical Engineering. 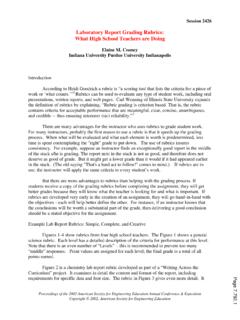 Laboratory Report Grading Rubrics: What High School Teachers are Doing ... work or what counts. 1 Rubrics can be used to evaluate any type of student work, including oral presentations, written reports, and web pages. ... Some freshman will recognize the importance of

The Market Pull Versus Technology Push Continuum Of ...

A consumer may be defined as the person (or group of persons) who puts the product (or service) into place for users. The purchasing group that decided what copiers to purchase or lease for a company, based on expected, collective, intended usage, and after comparing offerings, is the consumer . 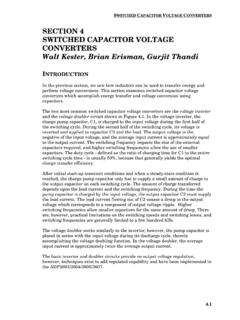 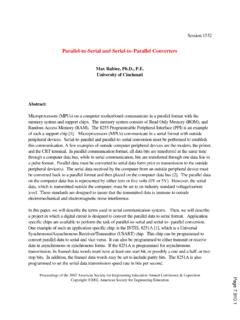 Parallel To Serial And Serial To Parallel Converters 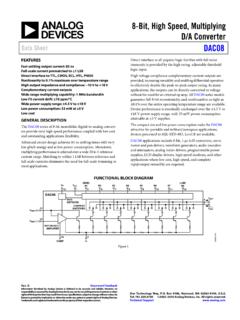 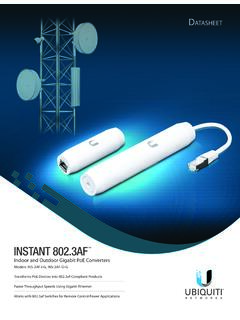