ANATOMY AND PHYSIOLOGY OF AVIAN …

ANATOMY AND PHYSIOLOGY OF AVIAN reproductive SYSTEMS Scott E McDonald DVM In the past 10 years, intense interest has developed in determining the sex of birds in AVIAN collections. No sexual dimorphism is evident in many species, especially psittacines, which has lead to the unintentional, but all too frequent pairing of two birds of the same gender. Numerous techniques have been developed to determine the sex in birds. Some of these are highly accurate, others are not. Although there is some degree of risk compared to noninvasive techniques, direct visualization of the gonads offers the highest success rate in accurately determining sex. The gonads are the sex organs where sperm and ovum are produced. In the male these are called the testes, and in the female, the ovary. As you might expect, the gross appearance of these two organs is morphologically different. It is their location which makes visualization difficult.

1 ANATOMY AND PHYSIOLOGY OF AVIAN reproductive SYSTEMS Scott E McDonald DVM In the past 10 years, intense interest has developed in determining the sex of birds in AVIAN collections. No sexual dimorphism is evident in many species, especially psittacines, which has lead to the unintentional, but all too frequent pairing of two birds of the same gender. Numerous techniques have been developed to determine the sex in birds. Some of these are highly accurate, others are not. Although there is some degree of risk compared to noninvasive techniques, direct visualization of the gonads offers the highest success rate in accurately determining sex. The gonads are the sex organs where sperm and ovum are produced. In the male these are called the testes, and in the female, the ovary. As you might expect, the gross appearance of these two organs is morphologically different. It is their location which makes visualization difficult.

2 In most mammals, including humans, the testes are located in the scrotum which is outside the body cavity. However, in birds, the testes are found within the abdominal cavity, situated on either side of the backbone adjacent to the cranial pole of the left and right kidney. In the female, the ovaries are present within the abdominal cavity of both mammals and birds. There are two ovaries in mammals, but in birds, there is only one functional ovary, which is always located on the left side, positioned similarly as the left testis. To visualize the gonads of birds, one must therefore enter the abdominal cavity surgically. As you can see already, there are anatomical differences between the gonads of birds and mammals. In fact, there are many unique features and differences between the reproductive systems of the two classes. Nonetheless, in the grand scheme of things, reproduction in birds is not altogether unlike that in mammals.

3 In this paper, anatomical and physiological characteristics of the male and female bird will be presented in order to give the aviculturist a better understanding of what happens when birds breed. MALE reproductive TRACT The male bird s reproductive tract consists of the paired testes, epididymis, and ductus deferens. Accessory sex glands ( prostate gland, seminal vesicle, bulbourethral gland) which are present in most mammals, are absent in birds. Also only a few species of birds possess a penile structure (phallus). TESTES The testes have two functions, to produce sperm and the male hormone, testosterone. Grossly, the testes are either oblong or cylindrical in shape, smooth on the surface, and creamy white in color, although they may be partially or totally pigmented. In cockatoos, for example, the testes are black in color. The testes are very small and usually avascular. In a mature bird, the testes can vary in size and greatly enlarge during the breeding season.

4 In birds with distinct breeding cycles, the testes atrophy after a period of active sexual stimulation. However, the testes never become as small as they were in the prenuptial stage. Microscopically, the testis consists almost entirely of tubular structures known as seminiferous tubules. Two types of cells line these tubules, spermatogonia cells and Sertoli cells. The spermatogonia cells proliferate and differentiate through definite stages of development to form sperm. Spermatogonia initially multiply and grow to form considerably enlarged cells called primary spermatocytes. These cells then enter a period of maturation in which the first maturation division forms secondary spermatocytes and the second maturation division forms the spermatids. Each spermatid develops into a spermatozoan. Spermatids are produced by meiotic division, that is, without replication of chromosomes, merely a division of those already present.

5 Therefore, each spermatid has half of the normal complement of chromosomes, none of them paired. Sertoli cells are large cells interspaced between spermatogonia which extend from the base of the seminiferous epithelium to the interior of the tubules. Spermatids attach themselves to the Sertoli cells and some specific relationship seems to exist between the two cell types which cause the spermatids to change into active sperm. Seminiferous tubules of immature males are small and lined by a single layer of cells. The mature testis has large irregular shaped tubules with a multi layered germinal epithelium consisting of cells representing all stages of spermatogenesis. This is what causes the testis to swell in size during the breeding season. Testosterone is produced by cells known as interstitial cells of Leydid. These cells are located in the spaces between seminiferous tubules. Testosterone is responsible for a variety of secondary sex characteristics such as male sexual behavior (including song), feather form and color (if different from the female), and the development of a comb and wattles in some species.

6 Testosterone may also help maintain spermatogenesis once it has been established under the influence of the pituitary gland. In mammals, increasing the temperature of the testes can inhibit spermatogenesis. This is the reason the testicles are located in a dangling scrotum outside of the body cavity. In addition, the scrotum is well supplied with sweat glands and the testes have a specialized arrangement of blood vessels which aid in keeping the testes cool. The intra abdominal testes of birds function at a temperature which is no different between that of the body. The threshold at which raised temperatures interfere with spermatogenesis is undoubtedly higher in birds than in mammals. EPIDIDYMIS The epididymis is a structure embedded within connective tissue at the attachment of the testis to the dorsal body wall. It consists of a chord like system of ductules. It is very short by comparison with that present in mammals.

7 The networks of seminiferous tubules (from the testis) unite in the epididymis and the contents flow into and through the ductules, ultimately emptying into the ductus deferens. In mammals, sperm is stored in the epididymis. Sperm also undergoes a maturation process in these ductules in which they develop mobility. DUCTUS DEFERENS In birds, the ductus deferens is the major storage organ for sperm on each side of the abdomen. It is a very extensive, convoluted tube which runs posteriorly, along the midline, parallel with the ureter. In the posterior abdomen, the convolutions of each ductus enlarge greatly; in the pelvis it is straight for a short distance prior to becoming sac like before ending in the cloaca by an erectile papilla (ejaculatory duct) which projects into the latero ventral urodeum. The urodeum is the mid region of the cloaca. Sperm undergo maturation in the ductus deferens of birds, not in the epididymis.

8 Sperm taken directly from the epididymis lack fertilizing capacity, whereas those taken from the ductus deferens can fertilize. About one half to two thirds of the contents of both ducti are expelled during ejaculation. In sexually active birds, it takes one to four days for sperm to be formed and reach the ductus. PHALLUS The phallus is analogous to the mammalian penis. There are two main varieties of phallus in male birds, the truly intromittent organ as seen in ratites (ostrich) and anseriforms (swans, geese) and the non intromittent type which is present in domestic fowl and some passeriforms. Psittacines lack a phallus. The phallus is located on the ventral lip of the vent. It is not to be confused with the opening of the ductus deferens in the urodeum on the end of a slender conical projection which is known as papilla. Psittacines copulate by eversion of the cloacal wall containing the slightly raised papilla which facilitates the transfer of semen to the everted orifice of the oviduct of the female during cloacal contact.

9 The phallus is different from the mammalian penis in three ways. Its erectile mechanism is lymphatic, not vascular, semen travel via the external surface, as opposed to the internal urethra, and finally the phallus is solely reproductive and urinary. SEMEN The volume of semen in one ejaculate averages ml in the turkey, ml in the chicken, but may be only .10 ml in an average size parrot. Volume varies widely among AVIAN species. It is extremely viscous due to the high density of sperm per unit volume. 100 Billion sperm are required for optimal fertility in the domestic fowl. In mammals, seminal fluid before ejaculation consists of fluid secretions from the testis, epididymis, and ductus deferens. Sperm stored in the epididymis and ductus deferens are infertile, possibly due to a slightly acidic environment and a lack of certain nutrients required to maintain mobility. However, at the time of ejaculation, fluids from the accessory sex glands are added which raises the pH and adds nutrients causing the sperm to become fertile.

10 This process is called capacitation. Although sperm can live for many months in the male genital ducts, once they are ejaculated, they can live for only 24 72 hours at body temperatures. In birds, no capacitation of sperm is necessary for fertilization to take place (sperm taken directly from the ductus deferens can fertilize). No accessory sex glands are present, so seminal fluids are composed of secretions originating only from the testis, epididymis, and ductus deferens. In addition, a lymph like fluid generated during erection and causing an engorgement of the phallic structures in the cloaca can be made to pass through the epithelial lining and intermix with the seminal fluid. This fluid is called transparent fluid and its significance is debatable. Unlike mammals, AVIAN sperm, once ejaculated and inseminated into the hen s oviduct can retain their fertilizing power for a period of many days to weeks. 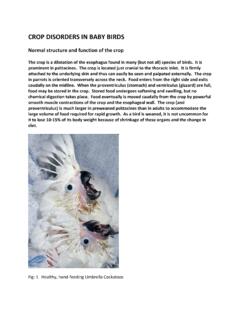 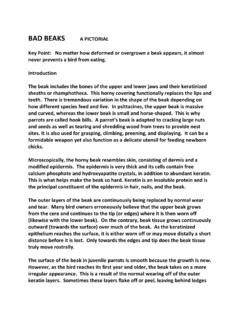 BAD BEAKS A PICTORIAL Key Point: No matter how deformed or overgrown a beak appears, 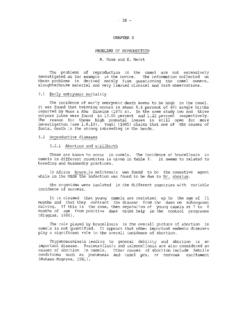 Reproduction in camels - A review 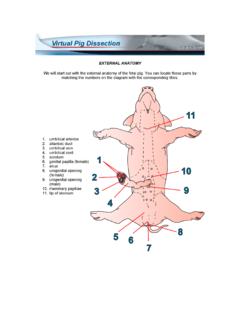 EXTERNAL ANATOMY We will start out with the external anatomy of the fetal pig. You can locate these parts by matching the numbers on …

WhAt StudentS KnoW And cAn do: Student PerformAnce In reAdIng, mAthemAtIcS And ScIence 8 © PISA 2009 ReOECD 2010 Sult : executIve … 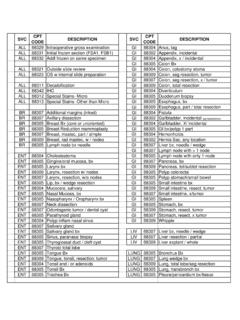 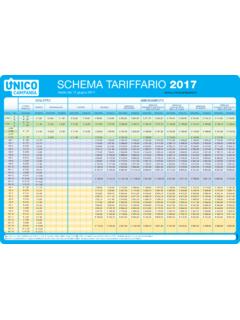