A. ancient egyptian hieroglyphs . KEY STAGE 2 Starting Points A Guide for Teachers to Room 4. Department of Education and Information Great Russell Street Telephone +44 (0)20 7323 8851/8850 London WC1B 3DG. Facsimile +44 (0)20 7323 8855 Switchboard +44 (0)20 7323 8000. Please note: 1. The Museum is very popular and attracts large crowds. It is important to explain this to the pupils before their visit, so that they can decide to use this public space thoughtfully. 2. Please encourage your pupils to behave calmly and to respect the needs and interests of other visitors. 3. Many of our galleries serve as main routes to other parts of the British Museum. Pupils should be aware of this so that they can ensure that they do not block pathways themselves or with their possessions. Please remind them not to sit or lie in the main routes through the galleries and that they should never run. 4. Before the visit it is advisable to discuss with your class the issue of the display of human remains.

4 Introduction The ancient Egyptians called their picture writing ‘divine word’ because they believed that Thoth, god of wisdom, had given them the knowledge of how to write.

1 A. ancient egyptian hieroglyphs . KEY STAGE 2 Starting Points A Guide for Teachers to Room 4. Department of Education and Information Great Russell Street Telephone +44 (0)20 7323 8851/8850 London WC1B 3DG. Facsimile +44 (0)20 7323 8855 Switchboard +44 (0)20 7323 8000. Please note: 1. The Museum is very popular and attracts large crowds. It is important to explain this to the pupils before their visit, so that they can decide to use this public space thoughtfully. 2. Please encourage your pupils to behave calmly and to respect the needs and interests of other visitors. 3. Many of our galleries serve as main routes to other parts of the British Museum. Pupils should be aware of this so that they can ensure that they do not block pathways themselves or with their possessions. Please remind them not to sit or lie in the main routes through the galleries and that they should never run. 4. Before the visit it is advisable to discuss with your class the issue of the display of human remains.

3 The guide will also help you to locate some of the hieroglyphs in the egyptian galleries and enable you to identify certain examples in other contexts. We provide here some basic information about hieroglyphs , which may by useful to you in designing activities for the gallery. We also hope that you will be able to use this information to generate questions which could actually be asked of the pupils as they observe the hieroglyphs themselves. We have supplied some information and tasks for eight sculptures in the gallery. The intention is that you can use these discussion notes for adult group leaders. You may choose to give each of your groups one or two of the sculptures to focus on. Do not give them all eight sculptures to study. Allow the pupils time to tour the gallery with their adult leader, to experience awe and wonder at the sculptures/space and look at or record things which are of interest to them. The British Museum Department of Education and Information 3.

4 Introduction The ancient Egyptians called their picture writing divine word' because they believed that Thoth, god of wisdom , had given them the knowledge of how to write. Consequently the signs were full of a magical force which, for example, could bring to life the items shown as the funerary offerings. Today we call egyptian picture writing hieroglyphs . This word derives from a phrase meaning sacred carvings' used by the ancient Greek visitors to Egypt to describe the symbols that they saw on tomb and temple walls. In the repertoire of the egyptian scribes there were more than 700 hieroglyphic signs. The hieroglyphs were chosen from a wide variety of observed images, for example, people, birds, trees, or buildings. Some signs represent the sounds of the ancient egyptian language, but indicate consonants only. No vowels were written out. Also, it was not an alphabetic system, since one sign could represent a combination of two or more consonants like the gaming-board hieroglyph which stands for the consonants mn.

5 Egyptologists make the sounds pronounceable by putting an e between the consonants, so mn is read as men. A. vast number of other hieroglyphic signs were not pronounced at all but acted as sense indicators, such as a boat following the sound sign dpt which was the word for boat. Invented in about 3250 BC, hieroglyphs were still used in the early centuries AD but gradually became less and less understood except by temple priests. By the time Egypt officially became a Christian country in the fourth century AD, hieroglyphs were history. Of course, the egyptian language continued to be spoken, but it was now written in an alphabetic script called Coptic, the knowledge of which helped Champollion to decipher the hieroglyphs forgotten for almost 2000 years. When the Arabs conquered Egypt in the seventh century AD, they introduced the Arabic language and writing, which you will find used by Egyptians today. The British Museum Department of Education and Information 4.

6 5. The Rosetta Stone (EA 24). Date: Ptolemaic Periods -196 BC. One of the British Museum's most famous objects, this slab of granite was the key to the decipherment of hieroglyphs . Discovered in 1799 by Napoleon's troops, the stone is inscribed with the same text in three different kinds of script; hieroglyphs at the top, demotic (a later form of egyptian writing) in the centre and ancient Greek at the bottom. Since Greek was understood scholars were able to use this language to help decipher the hieroglyphs . Thomas Young was the first person to show that some of the hieroglyphs on the Rosetta Stone wrote the sounds of the royal name Ptolemy, while the Frenchman Jean- Francois Champollion finally deciphered all the hieroglyphs in 1822. Draw the outline of the Rosetta Stone, show the position of the three different types of writing. hieroglyphs were written on a wide range of materials. How many different materials are there in Room 4 ?

7 As you go through the other galleries, tick the materials on which you find hieroglyphs : stone papyrus pottery plaster wood metal cloth clay The British Museum Department of Education and Information 6. 7. False Door (EA682). Date: Fifth Dynasty 2400BC. This huge red door is from the top level of a tomb belonging to a man called Ptahshepses. Through this door, it was believed that his spirit could come up to where offerings were left for him and then return to the burial chamber below. All around the door are carved hieroglyphs . This is Ptahshepses'. autobiography. To find the beginning of the text, look for a picture you recognise, an animal or a person. Which way do they face? They all point to the start of that section of text. Text could be read in any direction, sometimes changing part way through. On the sides of the door you can see representations of baskets of food; grapes, fresh dates on their stalks, figs, pomegranates and bread.

8 These were used by the deceased for food in case something happened to the offerings left by their relatives. Show which direction the humans or animals are facing. Use arrows to show the direction in which the text was read. Record another example which is different or changes direction. The British Museum Department of Education and Information 8. 9. Papyrus Column (EA 64). Date: Eighteenth Dynasty about 1390 BC. This column, shaped like a giant bundle of papyrus, was made in the Eighteenth Dynasty. It was later inscribed with the names of the pharaohs. All over the column you can see some hieroglyphs contained within an oval with a line across the base. This shape is called a cartouche'. The ancient Egyptians placed royal names inside the cartouche probably for a number of reasons. It is thought that the bar is used to represent the flat earth, and the oval is used to show the passage of the sun across the sky each day in the form of the god Ra.

9 It symbolized the power of the pharaohs over everything on which the sun shone. It was also an easy way to highlight royal names in a text. Draw the column in three stages: The whole column, to get the general outline, A part or cross-section of the column, to study the papyrus shape, A close-up of a detail of the column or its decoration or a cartouche. Read the label for the column carefully. Write out a new label for the column using no more than 30 words. Use your own ideas and those above to describe it. The British Museum Department of Education and Information 10. 11. Stela of Amenemhat (EA 587). Date: Twelfth Dynasty about 1900 BC. This stela or plaque, carved in low relief, is an example of a common type of burial relief. The dead person was an official called Amenemhat. He is shown sitting down at a table piled high with a feast. The foods are similar to those shown on the other tomb decoration. Look at Amenemhat's skin, it still has some of the original paint on it.

10 There are three lines of hieroglyphs to the side of Amenemhat. On the second line you will see the symbol enlarged on the illustration. This is called an ankh, and was the hieroglyph for life'. Make a list of the food you can identify. Can you make a judgement about how healthy the ancient egyptian diet was? Do you think everyone ate like this all of the time? Can you see paint on the stela, where? Write a dictionary definition for the word stela. Make a tally chart for the number of times you see the ankh sign on the sculptures in Room 4. The British Museum Department of Education and Information 12. 13. Sarcophagus lid of Setau (EA 78). Date: Nineteenth Dynasty - around 1230BC. Setau governed Kush, south of ancient Egypt, for the egyptian pharaohs. This is the lid of his sarcophagus, the large stone box that would have held his coffin. Setau probably didn't wear a beard when he was alive, but he is shown with one here. This is may have been because Osiris, Lord of the Dead wore a beard. 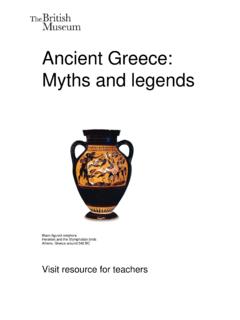 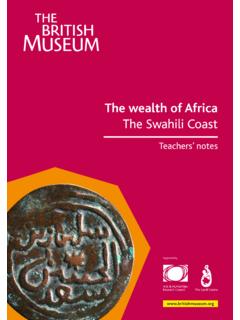 The wealth of Africa - British Museum

The wealth of Africa The Swahili Coast LESSON SCHEME: KILWA IN AN HOUR Aim To decide how advanced Kilwa was. Starter: Impressions of Kilwa and the Swahili Coast

Africa, Wealth, The wealth of africa 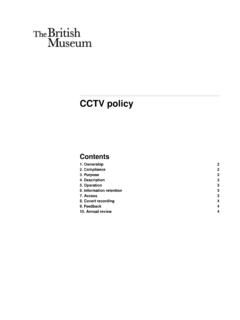 CCTV policy Page 3 4. Description The system is intended to produce images as clear as possible and appropriate for the purposes stated. The system is operated to provide when required, information

Getting Motivated to Change - Texas Christian …

Motivation 101 . Use the group’s responses to create a “working” definition of motivation. Summarize the discussion: The mapped definition …

Change, Getting, Discussion, Getting motivated to change, Motivated 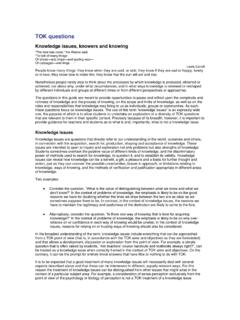 TOK questions Knowledge issues, knowers and knowing ―The time has come,‖ the Walrus said, ―To talk of many things: Of shoes—and ships—and sealing-wax— 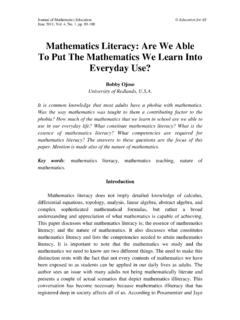 Mathematics Literacy: Are We Able - Education for All

Bobby Ojose 91 quite high. The reader is encouraged to read the entire report and see for themselves the magnitude of adult illiteracy in mathematics. 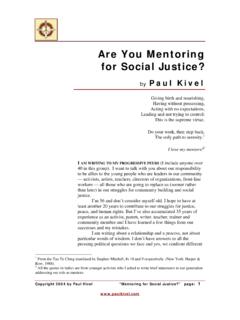 Copyright 2004 by Paul Kivel “Mentoring for Social Justice?” page: 4 www.paulkivel.com Who Me? It wasn’t easy at first to see myself as a mentor because I am not 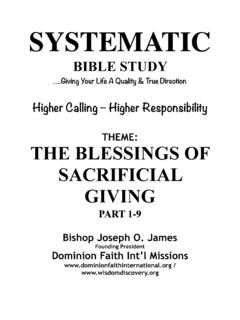 THEME: THE BLESSINGS OF SACRIFICIAL GIVING 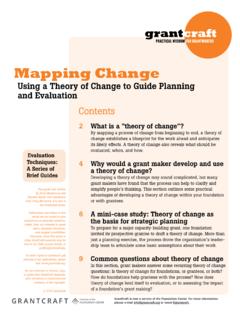 Grantcraft: Using a Theory of Change

Mapping Change: Using a Theory of Change To gUide planning and evalUaion What is a “theory of change”? A theory of change describes a process of planned social

Experiencing the Psalms: Participant Guide . If you’re working with a class or small group, feel free to duplicate the handouts in this 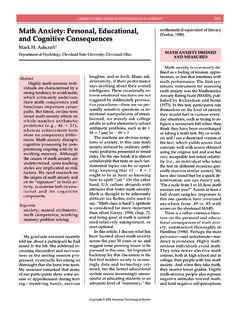 182 VOLUME 11, NUMBER 5, OCTOBER 2002 Published by Blackwell Publishing Inc. about their math abilities. The cor-relations between math anxiety and variables such as …