2 Spices offer a promising alternative for foodsafety. Inhibitory activity of spices and derivatives on the growth of bacteria, yeasts, fungi and microbial toxinssynthesis has been well reported, so they could be used in food conservation as main or as adjuvant antimicrobialcompounds in order to assure the production of microbiologically stable words: Spices, essential oil, extracts, chemical compounds, antibacterial activity, antifungal activityINTRODUCTIONFood conservation has been characterized fornutritious and microbiologically stable foods and ithas been archived by controlling the growth ofspoiling and pathogenic food-relatedmicroorganisms. Microbial control in foods couldbe assured by suppressing one or more essentialfactors for microbial survival (Horace, 1982).

5 Fifty years ofincreasing use of chemicals antimicrobials havecreated a situation leading to an ecologicalimbalance and enrichment of multiples multi-resistant pathogenic microorganisms (Levy, 1997).The successful story of microbial chemocontrollies in the continuous search for new antimicrobialsubstances to control the challenge posed byresistant strains (Notermans and Hoogenboon-Verdegaal, 1992). Antibiotic resistance infoodborne pathogens is a reality, thoughsubstantial qualitative and quantitative differenceshave been observed (Teuber, 1999). Strains ofresistant foodborne pathogens to a variety ofantimicrobials have become a major healthconcern (Kiessling et al.)

6 , 2002) and it coulddecrease the successful application of controlmeasures on spoilage and pathogenmicroorganisms, many times leading for use ofless safe, ineffective or expensive alternatives(Levy, 1997).Changes in/on the Antimicrobial target,inactivation by enzymes, changes in cellularpermeability, Antimicrobial active efflux,overproduction of target enzymes and bypass ofthe Antimicrobial have been common mechanismsof Antimicrobial resistance (McKeegan et al.,2002). Brull and Coote (1999) have reportedmicrobial resistance for some antimicrobials usedin food conservation as weak-organic acids,hydrogen peroxide, chelators and some smallorganic , there has been increasing interest indiscovering new natural antimicrobials (Sagdi etal.

7 , 2003a), this is also has been true in foodmicrobiology. Plant products with antimicrobialproperties notably have obtained emphasis for apossible application in food production in order toprevent bacterial and fungal growth (Lanciotti etal., 2004). Plant products are characterized for awide range of volatile compounds, some of whichare important flavor quality factors (Utama et al.,2002). Moreover, plant volatiles have beengenerally recognized as safe (GRAS) (Newberneet al., 2000). Systematic screening for biologicalinteractions between microorganisms and plantproducts has been valuable source of new andeffective Antimicrobial substances, which couldhave different action ways on/in the microbial cellwhen compared to other conventionalantimicrobials.

8 Plants synthesize by a secondarymetabolism many compounds with complexmolecular structures and some of them have beenrelated with Antimicrobial properties found in plantand their derivatives. Among these secondarymetabolites are found alkaloids, flavonoids,isoflavonoids, tanins, cumarins, glycosides,terpens and phenolic compounds (Sim es et al.,1999).Being plant natural foodstuffs, spices appeal toconsumers who tend to question the safety ofsynthetic additives (Farag et al., 1989; Sagdi 2003b). Antimicrobial properties of spices havebeen documented in recent years and interestcontinues to the present (-El Shami et al., 1985;Akgul and Kivan , 1988; Cosentino et al., 1999;Domans and Deans, 2000; Ristori et al.)

9 , 2002;Radhakrishanan-Sridhar and Velusamy-Rajaopal,2003). Still little information is availableemphasizing the preservative and antimicrobialrole of spices in the prevention of foods of themicrobial action (Arora and Kaur, 1999).Spices are recognized to stabilize the foods frontthe microbial deterioration. This could be observedwhen spices show initially high microbial chargeand as time progresses, the microbial growthbecome progressively slower or it is eventuallytotally suppressed (Kizil and Sogut, 2003). Antimicrobial activity of spices depend on severalfactors, which includes: i) kind of spice, ii)composition and concentration of spice, iii)microbial specie and its occurrence level, iv)substrate composition and v) processing conditionsand storage (Shelef, 1983; Farag et al. 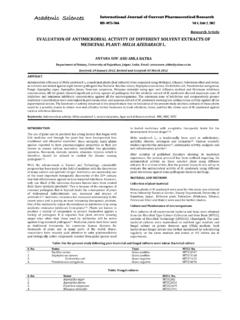 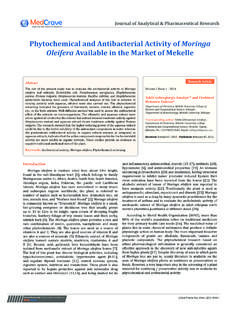 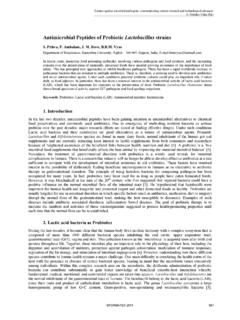