API Offshore Structure Standards: RP 2A and much …

OTC 17697. API Offshore Structure standards : rp 2a and much more A. Mangiavacchi, EXPERIA Consulting; G Rodenbusch, Shell Intl. E&P; A. Radford, American Petroleum Inst.; and D. Wisch, ChevronTexaco Inc. Copyright 2005, Offshore Technology Conference The installation in 20 feet (6 m) of water off the coast of This paper was prepared for presentation at the 2005 Offshore Technology Conference held in Louisiana of a steel platform owned by Kerr-McGee and Houston, TX, , 2 5 May 2005. designed by Brown & Root, in 1947, is generally accepted as This paper was selected for presentation by an OTC Program Committee following review of information contained in a proposal submitted by the author(s). Contents of the paper, as the official birth of the Offshore industry. Today, just over presented, have not been reviewed by the Offshore Technology Conference and are subject to half a century later, production facilities in 6,000 feet (2,000.)

OTC 17697 3 renamed respectively API RP 2A-WSD6 and API RP 2A- LRFD7. API RP 2A WSD 21st Edition, the latest, was issued in 1999, after considered review of the ongoing process of globalization of the offshore petroleum industry standards,

1 OTC 17697. API Offshore Structure standards : rp 2a and much more A. Mangiavacchi, EXPERIA Consulting; G Rodenbusch, Shell Intl. E&P; A. Radford, American Petroleum Inst.; and D. Wisch, ChevronTexaco Inc. Copyright 2005, Offshore Technology Conference The installation in 20 feet (6 m) of water off the coast of This paper was prepared for presentation at the 2005 Offshore Technology Conference held in Louisiana of a steel platform owned by Kerr-McGee and Houston, TX, , 2 5 May 2005. designed by Brown & Root, in 1947, is generally accepted as This paper was selected for presentation by an OTC Program Committee following review of information contained in a proposal submitted by the author(s). Contents of the paper, as the official birth of the Offshore industry. Today, just over presented, have not been reviewed by the Offshore Technology Conference and are subject to half a century later, production facilities in 6,000 feet (2,000.)

3 Day, is a multidimensional, multinational, and very colorful tapestry, with interweaving threads of extreme challenges, Abstract breathtaking drama, daring innovation, occasional failures, and, most of all, outstanding accomplishments. From the generally accepted birth of the Offshore industry in the Gulf of Mexico in 1947, 22 years elapsed before the first Over the years, many (companies and individuals alike) have Offshore Structure design standard , the 1st Edition of API RP contributed to the industry's advances and successes. Today, 2A1, was issued. In the ensuing 35 years, the Offshore through the ebb and tide of business fortunes, the relentless Structure technology, design practices and standards have seen erosion of time, and the constant winds of change, most of the a continuing evolution, a broadening of the original scope to pioneers are gone, companies have been swallowed up by encompass many diverse types of Offshore structures, and an leaner and meaner competitors, old time names and logos expansion from the original birthplace to an increasing have disappeared as part of corporate re-branding , and much number of other geographic areas.

4 In turn, the technology of the old way of working has been washed away by the export planted seeds that resulted in significant contributions tidal waves of new business models . to the industry growth from the international community. Fortunately, the memories and knowledge remain, thanks in With the API rp 2a 22nd Edition currently under preparation, part to an ample body of literature that, albeit in piecemeal this paper presents a high-level overview of the evolution of fashion, captures much of the industry's lore, its collective the US Offshore industry design practices and standards over experience and expertise. Some examples of the available the past 50 years, the leading role of the API Committee on sources are provided in the list of references. Standardization of Offshore Structures, and a preview of the major changes expected in the new edition. This paper focuses on some less dramatic and visible (and yet very significant) aspects of the evolution and growth of the Offshore industry: the progressive development of design Introduction technology and the systematic encapsulation of the practices in industry standards under the leadership of the American Drilling and production operations over waters started well Petroleum Institute (API).

5 Over 100 years ago, usually carried out from decks supported by wooden piles, connected to shore by long piers. This The American Petroleum Institute solution was successfully replicated in diverse locations such as the coast of Louisiana, the Caspian Sea, and Venezuela's The American Petroleum Institute (API), incorporated in Lake Maracaibo. 1919, is a trade association representing over 200 companies involved in all aspects of the oil and gas industry, including The term Offshore came into use some time later, in exploration, production, transportation, refining and reference to drilling and production facilities hosted by man- marketing. made islands, physically separated from the shore. 2 OTC 17697. The objectives of the Institute, as stated in its charter, are to: Some important principles, which still underpin the OSC. strategy, were established at the very beginning of the afford a means of cooperation with governmental development effort: authorities in all matters of national concern.

6 1. Build on existing applicable engineering codes and foster foreign and domestic trade in US petroleum guidelines, such as the AISC and AWS. products; specifications. API rp 2a was intended to fill the gaps where these two publications, primarily promote the interest of the petroleum industry in all intended for conventional onshore structures, were its branches; not adequate for Offshore platforms. promote the mutual improvement of the members and 2. Use a Working Stress Design (WSD) approach, also the study of the arts and sciences connected with the referred to as Allowable Stress Design (ASD), petroleum industry. reflecting the then prevalent US design practices. More information on the API, its history and its organization Three main areas of technology were initially identified for can be found at inclusion in rp 2a , where the standards mentioned above were not felt to be adequate: environmental loads, foundations, and tubular joints.

7 In time, other subjects such as The API Committee on Standardization of Offshore fatigue, dynamics, material selection, welding, and grouted Structures connections were deemed in need of special consideration for Offshore platforms, and were progressively addressed in the API's active involvement in Offshore structures was in part API rp 2a . These design topics continue to this day to be prompted by Hurricanes Carla (1961), Hilda (1964) and Betsy active technology development areas. (1965), which caused varying degrees of damage to several Offshore platforms. Consultation with the industry suggested that the time was ripe to address the issue of consolidating and API rp 2a A living document publishing adequate guidance and sound design criteria for the design of Offshore platforms. The formation of the OSC and the publication of API rp 2a . represented major milestones in several ways. With a technical An initial organizational meeting held at the Rice Hotel in basis to build on, and a forum established for the industry to Houston, Texas, on November 29, 1966, resulted in the meet and debate issues, both the scope of API rp 2a and the formation of the API Committee on Standardization of level of technical detail expanded to mirror the development Offshore Structures , charged with developing standards for of technology of the industry at large, and to accommodate the the design and construction of Offshore platforms, including increasing business requirements.

8 To manage these changes, a standards for equipment packaging and systematic and very effective update process was established that led to a number of revisions at a very fast pace. Since its inception, the original Committee has seen many changes in its name, internal Structure , responsibilities, The publication of the 7th Edition of API rp 2a (1976). composition, etc. Its size has varied from an initial represented a significant milestone, with the recommendation membership of 5 to an overall roster of over 100, including the for using the 100-year wave as the design condition. Up to members of the Task Forces, Work Groups, Resource Groups this point, the choice of return period was left to the that participate, in various capacity, in the Committee's owner/operator, and the use of both the 25 year and the 100. activities. year event was common. With the 7th Edition, the 100-year wave became standard practice. Rather than attempting to keep track of all the transformations, for the sake of clarity, the term Offshore Structure Committee API rp 2a 20th Edition, published in 1993, presented a (OSC) will be used throughout this paper to refer to the completely revised wave force formulation.

9 This included individuals that, under different labels, have served and additional terms in the traditional wave load formulation, and continue to serve the industry providing the leadership recommended using 100-year load conditions (rather than the required by this continuing effort. 100-year wave) as the basis for design. In the same year, 1993, the 1st Edition of the Load and API rp 2a The Offshore Structure Committee Resistance Factor Design (LRFD) version of API rp 2a made Flagship its long-awaited appearance. As described in a later section, the document's content was essentially identical to that of the Once established, the first task the OSC set for itself was to traditional rp 2a (still based on the original WSD approach), develop a recommended practice for fixed steel platforms. The except for the different design format. For the sake of clarity, 1st Edition of API rp 2a was issued in 1969. the API rp 2a title was changed, so the two documents were OTC 17697 3.

10 Renamed respectively API rp 2a -WSD6 and API rp 2a - Beaufort Sea, so the OSC recognized the need to develop LRFD7. appropriate design guidance for Offshore structures in ice environments. In 1979 a Work Group was formed, which API rp 2a WSD 21st Edition, the latest, was issued in 1999, produced in January 1982, in bulletin form, Recommended after considered review of the ongoing process of Practice for Planning, Designing and Constructing Fixed globalization of the Offshore petroleum industry standards , Offshore Structures in Ice Environments . After industry which will be further discussed in OTC 17698. review and substantial revisions, the document was issued in 1988 as API RP 2N. The size of the document has grown progressively from the 20-odd pages of the 1st Edition to the 90 pages of the 9th By the late 1980s and the 1990s, as it became obvious that the Edition, to the 160 pages of the 18th Edition (1989) to the over future of the Gulf of Mexico lay in deep waters, renewed 220 pages of the 21st Edition. 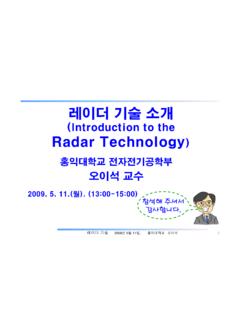 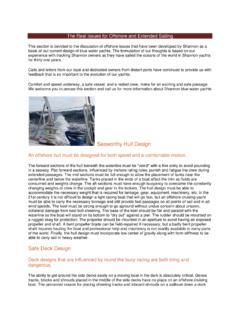 The Real Issues for Offshore and Extended Sailing. This section is devoted to the discussion of offshore issues that have been developed by Shannon as a Power Generation, Distribution and Substation System for Development of Offshore Wind Farms 170 cable head is that it is designed to allow a test voltage 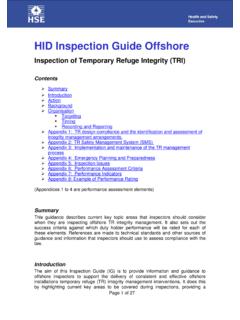 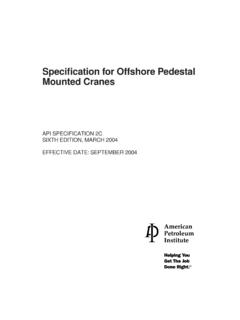 49 - Food and Agriculture Organization of the …

52 Fishing harbour planning, construction and management 5.1.2 Methodologies There are various methodologies in use nowadays to carry out a hydrographic survey, depending on the end use of the survey and the size of the area to be surveyed. 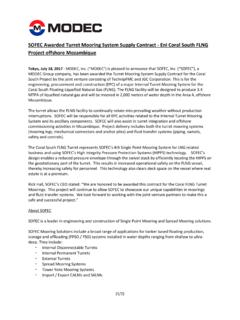