Appendix E: Sample Laboratory Report There is no set length for a problem Report but experience shows good reports are typically four pages long. Graphs and photocopies of your lab journal make up additional pages. Complete reports will include the terminology and the mathematics relevant to the problem at hand. Your Report should be a clear, concise, logical, and honest interpretation of your experience. You will be graded based on how well you demonstrate your understanding of the Physics . Because technical communication is so important, neatness, and correct grammar and spelling are required and will be reflected on your grade. Note: As with Problem 1 of Lab 1, the double vertical bars indicate an explanation of that part of the Report . These comments are not part of the actual Report .

1 Appendix E: Sample Laboratory Report There is no set length for a problem Report but experience shows good reports are typically four pages long. Graphs and photocopies of your lab journal make up additional pages. Complete reports will include the terminology and the mathematics relevant to the problem at hand. Your Report should be a clear, concise, logical, and honest interpretation of your experience. You will be graded based on how well you demonstrate your understanding of the Physics . Because technical communication is so important, neatness, and correct grammar and spelling are required and will be reflected on your grade. Note: As with Problem 1 of Lab 1, the double vertical bars indicate an explanation of that part of the Report . These comments are not part of the actual Report .

2 Usually a lab Report consists of the following parts: - Title, - Statement of the Problem, - Prediction, - Experiment and Results, - Conclusions, - References. In this Appendix there are three Sample lab reports, which are based on the actual lab reports written by students who took this course before. Our main goal of putting them here is to give you some information about writing lab reports. Basically, any lab Report is a simplified version of a research paper or technical Report . Therefore, it is written in a scientific style and it has the same main parts as a research paper/technical Report . As you go from #1 to #3, you'll notice the improvement in the quality of the samples . This is typical level of improvement of the students taking this course. Your goal is to be able to write such lab reports as Sample #3 after completing this course.

3 It's useful to read the Sample lab reports after completing the following laboratories in class: - Sample # 1 after Projectile Motion;. - Sample #2 after Conservation of Energy;. - Sample #3 after Rotational Motion. E-1. Appendix E: Sample LAB Report . Sample Lab Report #1. Title Write a descriptive title with your name, names of partners, date performed and TA name. Projectile Motion September 27, 2003. Performed by: Roman Ivanov, Tom Johnson and Mun Tiang TA name: Ken Spillner Statement of the problem In a sentence or two, state the problem you are trying to solve. List the equipment you will use and the reasons for selecting such equipment. The problem was to determine the dependence of the time of flight of a projectile on its initial horizontal velocity. We rolled an aluminum ball down a ramp and off the edge of a table starting from rest at two different positions along the ramp.

4 Starting from the greater height up the ramp meant the ball had a larger horizontal velocity when it rolled along the table. Since the table was horizontal, that was the horizontal velocity when it entered the air. See Figure 1 from my lab journal for a picture of the set-up. We made two movies with the video equipment provided, one for a fast rolling ball and one for a slower one. These movies were analyzed with LabVIEW to study the projectile's motion in the horizontal and vertical directions. Prediction This is the part of the lab where you try to predict the outcome of the experiment based on your general knowledge of Physics . If your predictions were wrong and you understood it during the lab, write correct ones in your lab Report . Also, attach initial predictions to your lab Report and explain what was wrong.

5 If you still have problems with the prediction, ask your TA or go to TA office hours for some help. Generally, predictions are based on the fundamental laws or principles. Therefore, refer to these laws as a starting point of your predictions. Our group predicted that the time the ball took to hit the ground once it left the table would be greater if the horizontal velocity were greater. We have observed that the faster a projectile goes initially, the longer its trajectory. Since the gravitational acceleration is constant, we reasoned that the ball would take more time to travel a larger distance. However, after completing the lab we understood that horizontal and vertical motion is independent. Therefore, for two given cases where the object had different initial horizontal velocity, the time of flight was the same.

6 So, our initial predictions were wrong. E-2. Appendix E: Sample LAB Report . Presentation of your lab Report is an important part of the evaluation process. It has to be written in a clear and understandable way for your peers, TAs and Professors. We recommend using Microsoft Word for writing lab reports, especially for its handy tool - Equation Editor. Equation Editor allows you to type complicated mathematical expressions in a compact and elegant way. In order to use this tool go to Insert Menu Object Microsoft Equation Mathematically, we start from the definition of acceleration: a= d dt ( ). dy dt and integrate twice with respect to time to see how a change in time might be related to initial velocity. We found that: y - yo = vo t + t2 (1). In this example, the student is explaining incorrect predictions.

7 Although motion is two- dimensional, he/she is using 0 while correct notation is 0 y as it is a projection of velocity onto y- axis. With the y-axis vertical and the positive direction up, we know the acceleration is -g. We also know that vo is the initial velocity, and yo - y is h, the height of the table. Solving for t one finds: 2. vo (vo + 2hg). t =. g (2). Faced with a choice in sign, our group chose the solution with the positive sign, deciding that a possible negative value for elapsed time does not correspond with our physical situation. From equation (2), we deduced that if vo increased, then the time of fall also increases. This coincided with our prediction that a projectile with fastest horizontal velocity would take the most time to fall to the ground. For a graph of our predicted time of flight versus initial horizontal velocity, see Graph A from the lab journal.

8 LabVIEW generated graphs of x and y positions as functions of time. Our prediction for the vertical direction was equation (1). Since the ball only has one acceleration, we predicted that equation (1). would also be true for the horizontal motion: x - xo = vo t + t2. The dotted lines on the printed graphs represent these predictions. **The Example of Two Bullets**. E-3. Appendix E: Sample LAB Report . Our TA asked us to compare a bullet fired horizontally from a gun to a bullet dropped vertically. Our group decided the bullet that is fired horizontally will take longer to hit the ground than the one that is simply dropped from the same height. Experiment and results This section describes your experimental method, the data that you collected, any problems in gathering the data, and any crucial decisions you made.

9 Your actual results should show you if your prediction was correct or not. To ensure the ball's velocity was completely horizontal, we attached a flat plank at the end of the ramp. The ball rolls down the ramp and then goes onto the horizontal plank. After going a distance (75 cm). along the plank, the ball leaves the edge of the table and enters projectile motion. We measured the time of flight by simply counting the number of video frames that the ball was in the air. The time between frames is 1/30 of a second since this is the rate a video camera takes data. This also corresponds to the time scale on the LabVIEW graphs. We decided to compare the times of flight between a ball with a fast initial velocity and one with a slow initial velocity. To get a fast velocity we started the ball at the top of the ramp.

10 A slower velocity was achieved by starting the ball almost at the bottom of the ramp. During the time the ball was in the air, the horizontal velocity was a constant, as shown by the velocity in the x-direction graphs for slow and fast rolling balls. From these graphs, the slowest velocity we used was m/s, and the fastest was m/s. After making four measurements of the time of flight for these two situations, we could not see any correspondence between time of flight and initial horizontal velocity (see table 1 from lab journal). As a final check, we measured the time of flight for a ball that was started approximately halfway up the ramp and found it was similar to the times of flight for both the fast and the slow horizontal velocities (see table 2 from lab journal). A discussion of uncertainty should follow all measurements. 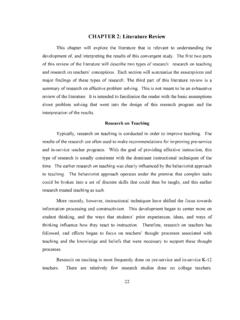 CHAPTER 2: Literature Review ... classroom instruction ... interrupt the flow of the lesson and increase the likelihood of classroom management 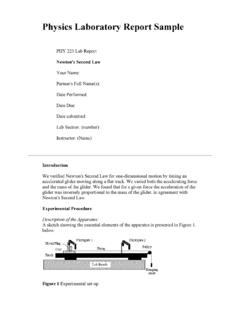 The experiment was conducted using a glider (a low-friction cart) rolling on a smooth, flat, level track. One end of a string was attached to the front of the 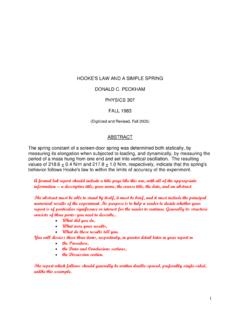 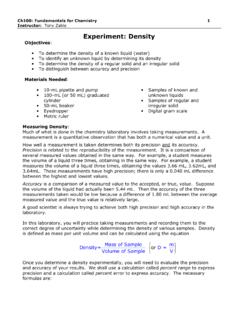 2 impurities affect the melting point of a substance. In a sample that contains a mixture of two compounds, each component usually lowers the melting 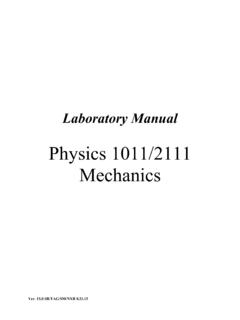 Physics 1011/2111 Labs ~ General Guidelines The Physics 1011 and 2111 labs will be divided into small groups (so you will either be working with one lab partner, or, for the larger classes, in a small group).

1 Introduction to Measurements & Error Analysis The Uncertainty of Measurements Some numerical statements are exact: Mary has 3 brothers, and 2 + 2 = 4. 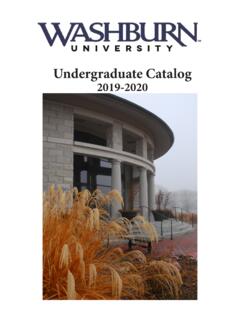 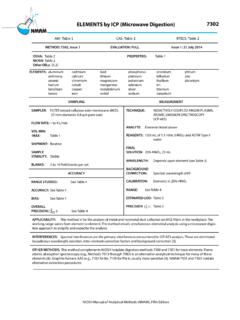