California Eastern Laboratories AN82901-1 Application NOTE. Application of Microwave gaas FETs 9/82. INTRODUCTION. The history of converting Microwave communications, as same time as the first Microwave bipolar transistor. well as other communications technologies , to solid state With the development of semiconductor manufacturing tech- electronics is a long one. Early advances were first made in nology and the need for lower energy consumption, the metal receivers, and then in transmitters. Progress in bipolar tran- oxide semiconductor FET (MOSFET) appeared. The sistor technology and the production of new semiconductor MOSFET, like the JFET, was first developed for applica- crystals during the 1960's made possible the development of tions in circuits that demanded high impedance, such as in- such new Microwave diodes as the GUNN and the IMPATT put circuits in analytical instruments.

AN82901-1 APPLICATION NOTE Application of Microwave GaAs FETs INTRODUCTION The history of converting microwave communications, as well as other communications technologies, to solid state

1 California Eastern Laboratories AN82901-1 Application NOTE. Application of Microwave gaas FETs 9/82. INTRODUCTION. The history of converting Microwave communications, as same time as the first Microwave bipolar transistor. well as other communications technologies , to solid state With the development of semiconductor manufacturing tech- electronics is a long one. Early advances were first made in nology and the need for lower energy consumption, the metal receivers, and then in transmitters. Progress in bipolar tran- oxide semiconductor FET (MOSFET) appeared. The sistor technology and the production of new semiconductor MOSFET, like the JFET, was first developed for applica- crystals during the 1960's made possible the development of tions in circuits that demanded high impedance, such as in- such new Microwave diodes as the GUNN and the IMPATT put circuits in analytical instruments.

2 Field effect transis- (impact avalanche and transit time). For this reason, the tors, particularly the MOSFET, became widely known for decade might well be called the renaissance of Microwave their use as discrete devices in UHF band communications. semiconductor devices. A series of Microwave communica- However, having focused solely on performance for many tions amplifiers appeared in the first half of the 1970's which years, nothing in the Microwave band appeared on the mar- used GUNN and IMPATT diodes. They played a leading ket which was superior to the bipolar transistor. role in the trend toward solid state technology. In the middle Around the time silicon reached its peak as a transistor ma- of the same decade, a commercially feasible gallium arsenide terial, Schottky barrier type FETs made of gallium arsenide field effect transistor ( gaas FET) appeared, and the uses of appeared and quickly gained popularity by demonstrating this device are still increasing.

3 In the latter half of the 1970's, their high theoretical performance. This new device, known demands grew for systems more reliable than those using as the Gallium Arsenide Metal Semiconductor FET ( gaas IMPATT and GUNN diodes. Users were demanding greater MESFET) showed performance far superior to the bipolar reliability, and those engaged in research and development transistor. began working toward this goal. The work is still going on This new device provided lower noise and higher gain in today. established solid state applications . It also provided high The demands of the industry turned the emphasis away from frequency characteristics previously unavailable from bipo- creating new devices to developing competition among manu- lar transistors.

4 It is made by using gallium arsenide (group facturers of semiconductors to produce devices of higher per- III-V); one of the semiconductor com pounds which has been formance and greater reliability. Commercialization of gaas researched continually since the latter half of the 1960's. field effect transistors led to lower energy consumption and The electron mobility of gallium arsenide is five to seven smaller Microwave components and systems. These are still times that of silicon. major concerns today. With new developments in infor Gallium arsenide crystal technology was used to produce mation, communications and applied Microwave systems, the GUNN, varactor and Schottky diodes, and proved to be the gaas FET has become an indispensable item.

5 Far better than silicon in high frequency performance. A. GUNN diode made of silicon would be inconceivable, so the appearance of the contemporary gaas FET contributed 1. THE FIELD EFFECT TRANSISTOR (FET) greatly to developing and commercializing the GUNN di- ode. The reason for this is that even though the gaas In 1952, Shockley conceived the structure of the field effect MESFET is a three terminal device, it is simple in structure type transistor and pointed out that it could be used for am- and its performance depends only on the crystal quality. plifier devices. Due to manufacturing difficulties, particu- Advances in crystal technology have made the commercial- larly in production technology, the field effect transistor was ization of FETs possible.

6 Little known until the early 1960's. The level of technology The gaas FET is what is generally referred to as a nor- at the time made it very difficult for people to understand the mally ON type device. Its basic difference from the importance of the FET. But with the development of planar MOSFET is the use of a Schottky barrier at the gate instead technology, the micro wave semiconductor industry grew with of an oxide layer. This is an extremely important point. In explosive rapidity. other words, almost no gaas FET gates are insulated from There are three major types of FETS. The simplest of the the channels in terms of direct current. Thus, even though three is the junction FET (JFET).

7 Because of its simplicity gaas FETs are called normally ON type devices, the maxi- and ease of manufacture, the JFET was the earliest to be mum gate voltage must be zero. It does not use a dielectric produced commercially. It was put on the market about the like the MOSFET, so if a positive voltage is applied at the AN82901-1. gate, direct current flows through it. Since the gate is a very Mutual conductance is defined as the ratio of the change in small piece of metal ( , ), the gate electrodes direct current to the minor change in voltage between gate will fuse completely in almost all cases. sources. This is generally described as the square-law char- Figure 1 shows the properties of a gaas MESFET.

8 In al- acteristic and is shown in the equation for ID in Figure 2. most all cases, a linear amplifier circuit biases the gaas MESFET. This applies to other circuits as well, but consid- 2. V GS (1). ering gate bias alone, the range must be from IDSS, , ID = IDSS 1- VG = 0 V, to IDS = 0 (at pinch off, VG = VP). In this range, the VP. voltage VDS between the drain and the source has little effect on the current IDS flowing through the channels. By chang- When ID in expression (1) is differentiated with ing the gate voltage, VG, the drain to source (channel) cur- respect to VGS, the result is rent can be controlled. Figure 2 shows the transfer charac- teristics of a gaas FET with n channels.

9 This FET transfer dID 2 IDSS V GS. =- 1- = gm (2). characteristic is an important basic parameter in circuit de- dVGS VP VP. sign because it sets the bias conditions and operating point. and the mutual conductance for each value of VGS can be The operating point line in Figure 2 is directly related to the obtained. mutual conductance, gm. II. gaas FET BIAS AND OPERATING POINT. The most important characteristic to consider when design- VG=0. ing a bias circuit for small signal gaas FETs is the previ- DRAIN CURRENT ( ID ). ously mentioned transfer characteristic. Generally, two meth- VG = -1 V ods can be used to bias a gaas FET. -2 V 1. Dual Power Source Method Figure 3 shows a bias circuit which uses the dual power -3 V source method.

10 Since the condition VP < VGS < 0. DRAIN TO SOURCE VOLTAGE ( VDS ). must always apply to a gaas FET, VGS can be derived from expression (1). Figure 1. Typical gaas FET DC Characteristics ID (3). VGS = VP 1 - I DSS. 2. Self Bias Method (Auto-Bias). Figure 4 shows the most universal method for reducing electrical potential between a gate and the source when there is only one power source. If the source resistance is RS, and ID the operating current is ID, then the drop in electric poten- V GS. 2 tial caused by RS will be I D = I DSS 1. VP. ID x RS. The actual electrical potential between the gate and the source will be VGS = -ID . RS (4). VP V P /2 0. VG. 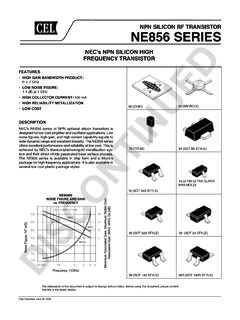 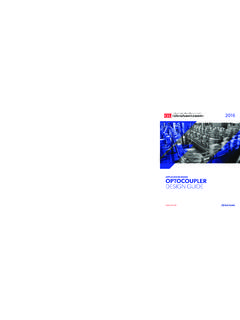 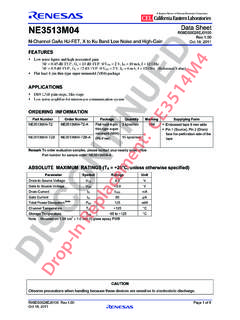 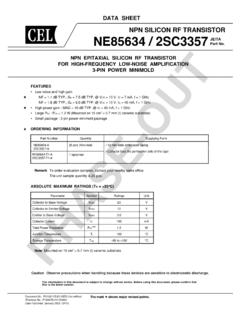 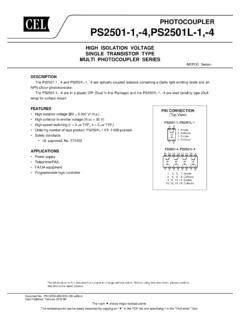 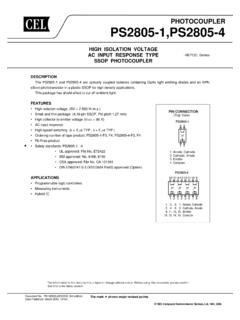 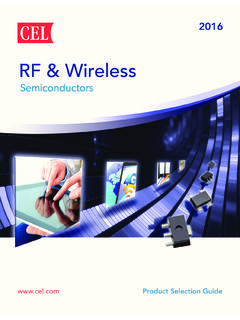 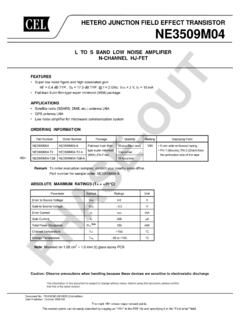 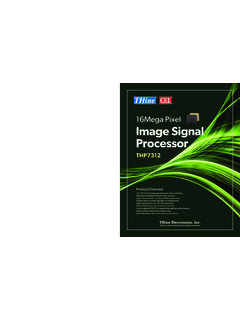 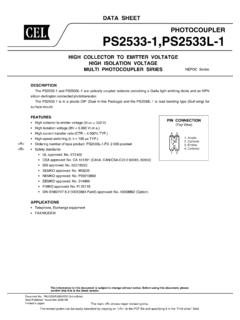 123 Chassis Control Systems for Safety, Environmental Performance, and Driving Comfort - 68 - This article describes the current state of development of chassis control systems and the outlook for the future. BRAKE SYSTEM Developments in …