AS 1288—2006 Australian Standard™ Glass in buildings—Selection and installation AS 1288—2006 This is a free 9 page sample. Access the full version online.

3 Between editions, amendments may be issued. standards may also be withdrawn. It is important that readers assure themselves they are using a current Standard, which should include any amendments which may have been published since the Standard was purchased. This is a free 9 page sample. Access the full version online. Detailed information about standards can be found by visiting the standards Web Shop at and looking up the relevant Standard in the on-line catalogue. Alternatively, the printed Catalogue provides information current at 1 January each year, and the monthly magazine, The Global Standard, has a full listing of revisions and amendments published each month.

4 Australian StandardsTM and other products and services developed by standards Australia are published and distributed under contract by SAI Global, which operates the standards Web Shop. We also welcome suggestions for improvement in our standards , and especially encourage readers to notify us immediately of any apparent inaccuracies or ambiguities. Contact us via email at or write to the Chief Executive, standards Australia, GPO Box 476, Sydney, NSW 2001. This Standard was issued in draft form for comment as DR 02145. AS 1288 2006. Australian Standard . Glass in buildings Selection and installation First published as AS CA26 1957.

6 AS 1288 2006 2. PREFACE. This Standard was prepared by the Joint standards Australia/ standards New Zealand Committee BD-007, Glazing and Fixing of Glass , to supersede AS 1288 1994. The objective of this Standard is to provide uniform direction for the use and installation of glazing throughout Australia to allow its use in legislation, and to clarify technical definitions. This Standard will be referenced in the Building Code of Australia 2006; thereby superseding AS 1288 1994, which will be withdrawn in 12 months from the date of publication of this Standard.

7 When revising this Standard, consideration was given to the existing human impact safety requirements of AS 1288 1994 and NZS :1999 Code of practice for glazing in buildings Part 3: Human impact safety requirements, as well as BS 6262-4, Glazing for buildings , Part 4: Safety related to human impact. There was also a need to recognize that accidents involving Glass continued at a high rate and at a considerable cost to the community. With these factors in mind, changes were made that have resulted in the introduction of increased areas of safety Glass and the reduction of areas of ordinary Glass in locations where accidents are known to occur at greater frequency.

8 The Standard has also been closely aligned with international practice by the adoption of selected criteria from international standards . The change to ultimate limit state design in the new wind code has necessitated the corresponding upgrading of the wind loading charts. The new charts are based on the increased ultimate limit state wind loads. The committee has taken this opportunity to improve the design charts to include basic criteria such as the influence of aspect ratio and slenderness factor. The charts are unique as they incorporate all relevant aspects that influence the performance of Glass in the one chart for each Glass type and thickness.

9 The most significant changes of this revision include the following: (a) Change from permissible design stresses for wind loading to Ultimate Limit State design. (b) New design charts for wind loading based on ULS and taking into consideration panel aspect ratio. (c) Introduction of new and increased areas of safety Glass in locations subject to high risk of human impact. This is a free 9 page sample. Access the full version online. (d) New section on installation requirements for Glass . (e) New sections and detailed specifications for overhead glazing, balustrades, faceted glazing and fin-supported glazing.

10 The Committee considers that this Standard represents the best compromise that can be presented at this time. Further research and testing for safety will possibly result in changes which will be incorporated in future editions. It makes recommendations for design and installation practice based on proven techniques but does not restrict the adoption of materials or methods of design that can be shown to the satisfaction of the responsible authority to provide no lesser standard of materials, designs or constructions than obtained by using the procedures specified herein. 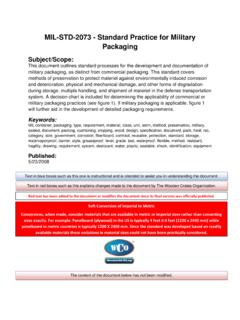 MIL-STD-2073 - Standard Practice for Military Packaging Subject/Scope: This document outlines standard processes for the development and documentation of 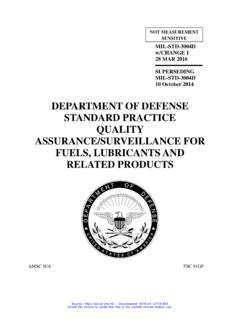 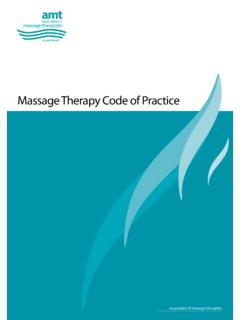 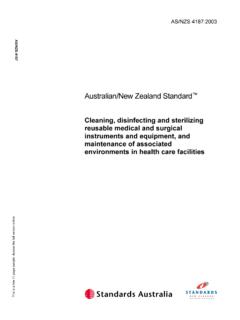