Assessment of Early Warning and Reporting …

2 Consisted of four professionals with complementary backgrounds, experience and expertise: Dr. David Pyle was the team leader. He is a senior associate at JSI and has considerable experience in monitoring and evaluation. Pyle has served as team leader on a number of evaluations of USAID projects. Dr. Lalit Nath brought significant knowledge of surveillance systems and infectious diseases. His distinguished career has included serving as director of the All India Institute of Medical Sciences and as a member of the Scientific Advisory Committee for the Department of Communicable Diseases and Surveillance, Global Alert and Response at WHO/Geneva. His responsibility in the Assessment was on technical, disease -related matters as well as surveillance issues. Dr. Badri Lall Shrestha served in the MOH in a number of capacities including Director General of Health Services and Chief of the Malaria control Division. Dr. Shrestha reviewed EHP's support to EWARS training and laboratory support.

3 Dr. Asok Sharma has been the program officer of EHP/Nepal for the last two years, largely responsible for overseeing the project's support of EWARS. He was instrumental in organizing and looking after all the logistics involved in the Assessment while providing the team with any background materials and information that it required. In addition, Sushil Koirala, who works with EDCD and EHP on EWARS, assisted in the field Assessment and in the preparation of the dissemination presentation. vi Executive Summary The Environmental Health Project (EHP) requested a team of consultants to carry out an Assessment of the Early Warning and Reporting System (EWARS) in Nepal. The objective of the Assessment was to examine the current performance of the system in the eight pilot districts, focusing attention on the Reporting and response functions. EWARS is a hospital-based sentinel surveillance system. It includes six diseases: three vaccine-preventable diseases or VPDs (polio, measles and neonatal tetanus or NNT) and three vector-borne diseases (malaria, kala-azar (KA), and Japanese Encephalitis (JE)).

4 It was designed to provide more timely information to the decision makers to facilitate Early response. EWARS was started in 1996, and the Epidemiology and disease control Division (EDCD) of the MOH has been the implementing agency. The number of sentinel sites has grown to the current 28, and they are expected to report every week on the number of cases and/or deaths (including zero reports) of the six priority diseases. EDCD compiles the information from the Reporting districts and publishes a weekly EWARS Bulletin. A team of three experts conducted the Assessment during a three-week period in November 2003, in anticipation of the termination of EHP activities and funding in Nepal in March 2004. The Assessment was launched with several Team Planning Meetings, including one in Washington with relevant EHP and USAID personnel and the Team Leader attending, and one in Kathmandu with the EHP/Nepal staff and the Assessment team. The methodology followed in the Assessment included interviews with key officials in the Ministry of Health (MOH) as well as in the field.

5 In addition, the Assessment team reviewed all significant reports and documents. Moreover, the team visited four of the pilot and several of the non-pilot EWARS districts and spoke to the hospital and public health officials who played a role in the surveillance system and rapid response teams (RRTs). The Assessment findings were disseminated to the EWARS stakeholders at a workshop, and feedback from the participants was integrated as appropriate into the final report. The principal findings of the Assessment team are divided into strengths, weaknesses and recommendations. They are summarized here: I. Strengths The MOH has grown to accept the need and importance of EWARS. EWARS has created an awareness at the district level of what an Early Warning system is, how it functions and why it is vital. A third of the districts (25/75) are now submitting weekly reports on the incidence of priority diseases. vii The need for rapid response in the form of an RRT and how it is to be employed has been reinforced at the district level.

6 Capacity has been built into a portion of the districts for Early Warning data collection, Reporting and response. Hospitals and district public health offices (DPHO) are working together in some districts. The dipsticks for the rapid diagnosis of KA and falciparum malaria have proved to be very effective and helpful for Early treatment of these diseases at the periphery. Community-based diagnosis and referral has demonstrated great potential. His Majesty's Government (HMG)/MOH has supported the Early Warning and response principle by committing resources to EWARS. The MOH has accepted ownership of this donor-initiated activity. II. Weaknesses The diseases included in EWARS were not all prone to epidemic outbreaks ( , NNT and KA). A hospital-based system, by its very nature, cannot provide Early Warning it is too late once a patient is admitted to a hospital. There is overlap in the Reporting of VPDs with the Polio Eradication Nepal (PEN).

7 That has a much more extensive network of Reporting sites. Confirmed diagnoses of JE cases are limited by inordinate delays in Reporting and exorbitant transportation costs. EDCD has not been proactive in its support of capacity building and other aspects of EWARS ( , percentage of reports received on time has not improved in last five years). Feedback to the districts in the form of EWARS Bulletin has been irregular and tends to be in batches (sent every two to three months). The relationship between the medical superintendent at the district hospital and the DPHO is still problematic in most districts. No budget line is allocated to support EWARS activities, resulting in the fact that it often loses to competing priorities and receives scarce resources if any. There are multiple disease -specific Reporting systems in existence ( , for TB, STI/HIV/AIDS, leprosy, malaria) that respond to different programs or donor perceptions. The Reporting loop through the Vector-Borne disease Research and Training center (VBDRTC) is unnecessary.

8 Viii With no plans for income generation in place, sustaining the VBDRTC after USAID/EHP funding ends in March 2004 will be difficult if not impossible. There is no national plan or policy supporting a national disease Early Warning and response system. III. Recommendations In general, the Assessment team supported the establishment of a sustained and effective, integrated Early Warning and Rapid Response System in Nepal. For this to become a reality, the following should be considered: EWARS should be moved from the hospital to the Public Health structure. Data should originate at the periphery (from the Female Community Health Volunteer (FCHV) and the sub-health posts). To ensure effectiveness of an Early Warning system, capacity must be built to collect and analyze data and to initiate a prompt, effective response. A line item for diagnosis and Early response at the district level should be added to the budget. With the empowerment of the districts there is no identifiable role for VBDRTC.

9 In data management; the data can and should be sent directly to EDCD for information and compilation. The role envisioned in EWARS for the VBDRTC should be restricted to training and the inclusion of more diseases beyond VBDs. The VPDs should be dropped from EWARS and left to PEN, with its extended and well-funded program. Community-based malaria and KA diagnosis and Early Warning /response should be expanded. KA should not be included in an Early Warning system since it is better served in a national registry or health management information system (HMIS). The cost of diagnosing JE should be reduced by posting a serum sample on filter paper to the lab and procuring dividable microtiter plates. EWARS could be expanded to include other epidemic-prone diseases, including emerging/reemerging diseases and diseases on unknown origin. In summary, the Assessment team concluded that the HMG/MOH should explore the possibility of developing and institutionalizing an integrated disease surveillance system with the capacity for Early Warning , and incorporating into this an effective rapid response mechanism.

10 Donors could take a larger or smaller share of this national surveillance and response plan. ix 1. Introduction The Environmental Health Project (EHP) requested a team of consultants to conduct an Assessment of the Early Warning and Reporting System (EWARS) that it has supported for the last several years. This support will terminate in March 2004, as the current EHP comes to an end in June 2004. With the end of EHP in sight, the Assessment team was asked to review EWARS operations and its effectiveness. In addition, the team was asked to recommend what the Department of Health Services of the Ministry of Health (MOH) of Nepal might consider in the future to identify disease outbreaks and respond to them in the most effective way to safeguard the health of the population. The Scope of Work for the Assessment team is appended as Annex 1. The Assessment team gathered in Kathmandu on Nov. 5, 2003, and began the assignment with a team planning meeting (TPM) that included a review of the background and the current status of EWARS, identification of the primary and secondary clients, and discussion of how the team would work with the client. 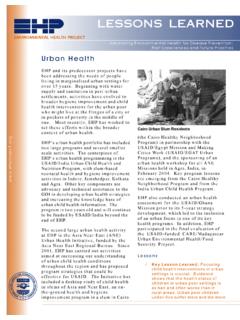 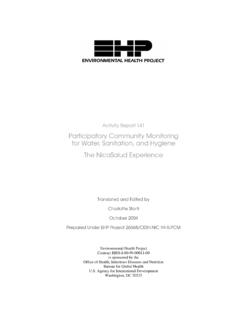 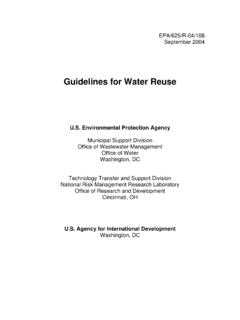 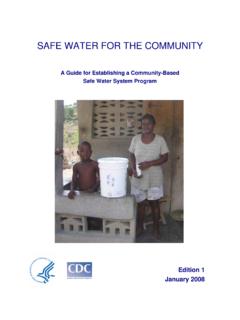 SAFE WATER FOR THE COMMUNITY - ehproject.org

6 Step 1: Complete Need and Feasibility Assessment The first step in starting an SWS program is to assess the feasibility of the program based on three factors: 1) the needs and desires of the community; 2) existing water 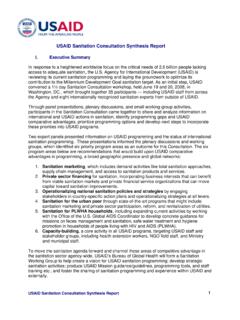 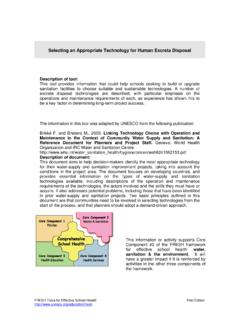 Selecting an Appropriate Technology for Human …

Selecting an Appropriate Technology for Human Excreta Disposal Description of tool: This tool provides information that could help schools seeking to build or upgrade 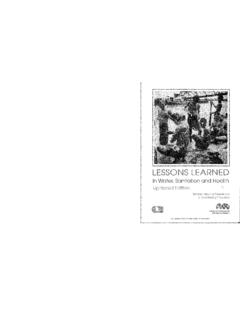 Lessons Learned in Water, Sanitation and Health Thirteen Years of Experience in Developing Countries Compiled by the Staff of the Water and Sanitation for Health (WASH) Project 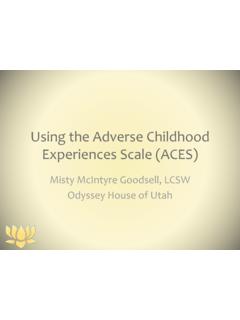 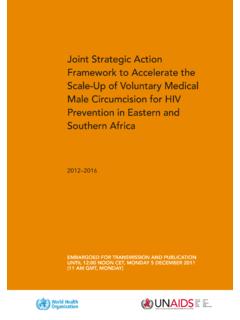 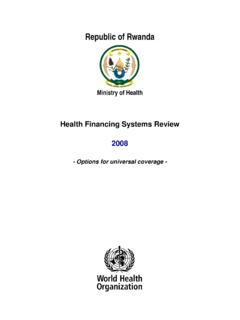 Republic of Rwanda - WHO

Acknowledgements The present report is a joint product of the World Health Organization and of the Ministry of Health of Rwanda. It was prepared by Mr Adélio Fernandes Antunes and Ms Priyanka Saksena with the contributions of Mr Riku Elovainio,