research in practice makes strong connections between practiceand research to improve outcomes for vulnerable children andfamilies, and the capacity of policy, services and professionals torespond to their needs. Established in 1996 as an initiative of theAssociation of Directors of Social Services, it has bases at Dartingtonand Sheffield and has become the largest childcare researchimplementation project in the in practice acts as a catalyst for the use of evidence toimprove children and family services. It works intensively withmember agencies in social services departments and largevoluntary organisations and with associate members among socialcare, health and education agencies and service user in practice is a developmental network.

Children and domestic violence: a research overview of the impact on children Catherine Humphreys and Audrey Mullender research in practice www.rip.org.uk

1 research in practice makes strong connections between practiceand research to improve outcomes for vulnerable children andfamilies, and the capacity of policy, services and professionals torespond to their needs. Established in 1996 as an initiative of theAssociation of Directors of Social Services, it has bases at Dartingtonand Sheffield and has become the largest childcare researchimplementation project in the in practice acts as a catalyst for the use of evidence toimprove children and family services. It works intensively withmember agencies in social services departments and largevoluntary organisations and with associate members among socialcare, health and education agencies and service user in practice is a developmental network.

2 It advancesresearch based improvement via the world wide web, by organisingexchanges, projects and conferences, through publishing (onpaper, audiotape and the web) and by supporting professionaldevelopment. All the services are interlinked: each supports therest at all levels within member agencies and, in the process,furthers the cause of multi-faceted interventions to bring aboutchange and growth. We collaborate with ambitious agencies those that have vision and a strategy for change. Together, webring a discerning eye to innovation and evaluation and test outmethods that others may adopt and in practiceChildren and Domestic ViolenceCatherine HumphreysAudrey MullenderresearchinpracticeChildren and Families research GroupElmfieldUniversity of SheffieldSheffield S10 2 TUtel 0114 2226482fax 0114 222 6483email House, DartingtonTotnesDevonTQ9 6 EGtel 01803 867692fax 01803 866783email and domestic violence .

3 A research overview of the impact on childrenCatherine Humphreys and Audrey Mullenderresearch in research REVIEW OF THE IMPACT ON CHILDREN about this pamphletOne of the main ambitions of research in practice is to give localauthorities and voluntary organisations better access to reliableresearch that has been distilled with a particular readership in series of occasional pamphlets covers key practice areas,identified by practitioners, and key research strategy issues, identifiedby planners and policy makers. We believe our methods chime wellwith the developing national agenda for building more effective, moreconsistent services for children on an increasingly robust platform ofresearch pamphlet looks at the much neglected question of the impactof domestic violence on children.

4 Too often, usually out of sympathyfor the plight of women at home, childcare workers have turned awayfrom domestic violence and, as a result, women and children alikehave suffered continuing abuse and distress. Yet some of the researchon intervention and what can be done to promote better outcomes isheartening and there are some surprising findings, including theviews of the children of the intention in this series is to stimulate discussion abouthow research can be used for the benefit of children and theirfamilies. The partnership between research in practice and its memberagencies supports this process in a number of ways throughmeetings, email discussion groups and the learning zone areas ofour website ( ).

5 Members are encouraged to make useof the Discussion Groups we have set up for this and also the otherpamphlets in the are provided free to our members. Others may purchasecopies through our website or our Dartington office. The series is anexample of a wider range of activities that together support theadoption and implementation of research findings. More informationabout research in practice can be found on the back of this AND DOMESTIC violence contents5background6 defining domestic violenceincidence8 the experiences of children living withdomestic violencewitnessing abuselinks with physical abuseseverity of violenceother risksabuse during pregnancylinks with child sexual abuseflow-on effects13 the impact on children of living with domesticviolenceimpact on behavioural and emotional well-beingimpact on cognitive abilitiesthe different effects of agethe different

6 Effects of race and ethnicitythe cycle of abuse children s resilience18 overlap with post-separation violence and childcontactcontinuing to witness or be abusedrecovery from the effects of violence19 children s views about living with domesticviolence21 children as social actors21 worrying attitudes among young people moregenerally22 what helps?raising young people s awarenessdirect work with children who have lived with domesticviolencework in refugesgroupworkone-to-one work26 conclusion28 references4A research REVIEW OF THE IMPACT ON CHILDREN5 CHILDREN AND DOMESTIC violence background No one thinks enough of the kids - thinks what effect it has on them.

7 Itdoesn t just affect the mother - it s the Because they re the onesthat have got to see it, and hear it. (17 year old girl)1 Strategies for denying or minimising domestic violence are still evidentin current social work with children and families. A documentary analysisfrom the case files of two children and families teams showed thefollowing patterns: failure by professionals to report to child protection conferencesknown incidents of domestic violence so causing the issue tobecome lost inappropriately naming violence (usually by the man towards thewoman)

8 As marital conflict or arguments so that the source ofthe danger was not identified and its impact was obscured shifting the focus of assessment to other issues such as mentalhealth or alcohol abuse which, while also present, were not thecause of the danger and indeed, sometimes resulted from it naming the mother s behaviour as an equally, or a more seriousproblem than the man s violence even when the file documentedsignificant evidence to the contrary identifying the man as the cornerstone of the family rather thanchallenging his violence towards his partner; and only namingthe most extreme forms of physical violence (the atrocity story )while ignoring other aspects of a pattern of emotional, physicaland sexual abuse ( Humphreys , 2000).

9 While the study also produced evidence of more sensitive practice, thedominant pattern of minimisation and avoidance can be singled out asa key problem that social work must overcome if practice is to becomemore effective in this area. This is not a new finding, but one consistentlyreplicated in other studies (Maynard, 1985; Milner, 1993; Farmer and Owen,1995; Brandon and Lewis, 1996), thus suggesting an issue which is longoverdue for review of the research will address the following issues: definingdomestic violence and the gendered pattern of abuse; the experiences ofchildren living with domestic violence and the overlap with other formsof abuse; the impact on children of living with domestic violence ; theproblems associated with post-separation violence .

10 And policyimplications and practice interventions. Sources from UK-based workare used wherever available and are supplemented with research fromthe USA, Canada and Except where otherwise stated, children s words are cited from interview or questionnaires inthe authors own research research REVIEW OF THE IMPACT ON CHILDREN defining domestic violence He says he loves my Mum but he lies. He tells Mum to do everything athome. He never gave Mum any money. He hit my Mum, I saw it. I triedto look happy but I wasn t inside. He never played with me - I My Dad hit my sister with a plate and she started bleeding onher head.

Global and regional estimates - WHO | World …

Global and regional estimates of violence against women: prevalence and health effects of intimate partner violence and non-partner sexual violence 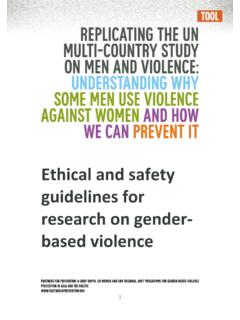 Ethical and safety guidelines for research on …

2 Acknowledgements This Ethical and Safety Guidelines for Research on Gender-Based Violence was produced for Partners for Prevention by Emma Fulu and James Lang, both with Partners for 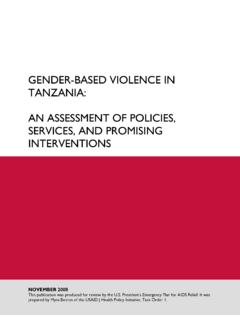 GENDER-BASED VIOLENCE IN TANZANIA: AN …

Based, Tanzania, Gender, Violence, Initiative, Gender based violence in tanzania 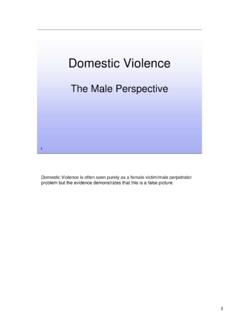 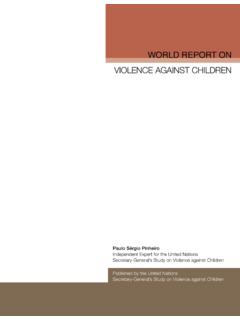 V ACknowledgements The World Report on Violence against Children has benefited from the support of many institutions and friends. I acknowledge with thanks the many organisations, experts, authors,

MEDICAL PROVIDERS’ GUIDE TO MANAGING THE …