Awaken the Giant Within - shamtimes

Awaken the Giant Within Anthony Robbins DREAMS OF DESTINY 1. DECISIONS: THE PATHWAY TO POWER 12. THE FORCE THAT SHAPES YOUR LIFE 28. BELIEF SYSTEMS: 44. CAN CHANGE HAPPEN IN AN INSTANT? 69. OF NEURO-ASSOCIATIVE CONDITIONING 80. HOW TO GET WHAT YOU REALLY WANT 100. QUESTIONS ARE THE ANSWER 123. THE VOCABULARY OF ULTIMATE SUCCESS 141. THE POWER OF LIFE METAPHORS 162. THE TEN EMOTIONS OF POWER 175. CREATING A COMPELLING FUTURE 195. THE TEN-DAY MENTAL CHALLENGE 222. ULTIMATE INFLUENCE: YOUR MASTER SYSTEM 231. LIFE VALUES: YOUR PERSONAL COMPASS 242. RULES: IF YOU'RE NOT HAPPY, HERE'S WHY! 264. REFERENCES: THE FABRIC OF LIFE 284. IDENTITY: THE KEY TO EXPANSION 299. EMOTIONAL DESTINY: THE ONLY TRUE SUCCESS - DAY ONE 316. PHYSICAL DESTINY: PRISON OF PAIN OR PALACE OF PLEASURE DAY TWO 318. RELATIONSHIP DESTINY: THE PLACE TO SHARE AND CARE -DAY THREE 326.

Awaken the Giant Within . Anthony Robbins . DREAMS OF DESTINY 1. ... I developed a belief that we're all here to contribute something unique, that deep within each of us lies a special gift. You see, I truly believe we all have a sleeping giant within us. Each of us has a talent, a gift, our own bit of genius just waiting to be tapped. It might ...

1 Awaken the Giant Within Anthony Robbins DREAMS OF DESTINY 1. DECISIONS: THE PATHWAY TO POWER 12. THE FORCE THAT SHAPES YOUR LIFE 28. BELIEF SYSTEMS: 44. CAN CHANGE HAPPEN IN AN INSTANT? 69. OF NEURO-ASSOCIATIVE CONDITIONING 80. HOW TO GET WHAT YOU REALLY WANT 100. QUESTIONS ARE THE ANSWER 123. THE VOCABULARY OF ULTIMATE SUCCESS 141. THE POWER OF LIFE METAPHORS 162. THE TEN EMOTIONS OF POWER 175. CREATING A COMPELLING FUTURE 195. THE TEN-DAY MENTAL CHALLENGE 222. ULTIMATE INFLUENCE: YOUR MASTER SYSTEM 231. LIFE VALUES: YOUR PERSONAL COMPASS 242. RULES: IF YOU'RE NOT HAPPY, HERE'S WHY! 264. REFERENCES: THE FABRIC OF LIFE 284. IDENTITY: THE KEY TO EXPANSION 299. EMOTIONAL DESTINY: THE ONLY TRUE SUCCESS - DAY ONE 316. PHYSICAL DESTINY: PRISON OF PAIN OR PALACE OF PLEASURE DAY TWO 318. RELATIONSHIP DESTINY: THE PLACE TO SHARE AND CARE -DAY THREE 326.

2 FINANCIAL DESTINY: SMALL STEPS TO A SMALL (OR LARGE) FORTUNE - DAY FOUR 329. MASTER YOUR TIME AND YOUR LIFE DAY SIX 345. REST AND PLAY: EVEN GOD TOOK ONE DAY OFF! DAY SEVEN 348. THE ULTIMATE CHALLENGE: WHAT ONE PERSON CAN DO 350. 1. DREAMS OF DESTINY. 1. A consistent man believes in destiny, a capricious man in chance. BENJAMIN DISRAELI. We all have We all want to believe deep down in our souls that we have a special gift, that we can make a difference, that we can touch others in a special way, and that we can make the world a better place. At one time in our lives, we all had a vision for the quality of life that we desire and 1. capricious launisch deserve. Yet, for many of us, those dreams have become so shrouded2 in the frustrations and routines of daily life that we no longer even make an effort to accomplish3 them.

3 For far too many, the dream has dissipated4 and with it, so has the will to shape our destinies. Many have lost that sense of certainty that creates the winner's edge. My life's quest has been to restore the dream and to make it real, to get each of us to remember and use the unlimited power that lies sleeping Within us all. I ll never forget the day it really hit me that I was truly living my dream. I was flying my jet helicopter from a business meeting in Los Angeles, traveling to Orange County on the way to one of my seminars. As I flew over the city of Glendale, I suddenly recognized a large building, and I stopped the helicopter and hovered above it. As I looked down, I realized this was the building that I'd worked in as a janitor5 a mere twelve years ago! In those days, I had been concerned whether my 1960 Volkswagen would hang together for the 30-minute trip to work, my life had been focused on how I was going to survive; I had felt fearful and alone.

4 But that day, as I hovered there in the sky, I thought, "What a difference a decade can make!" I. did have dreams back then, but at the time, it seemed they'd never be realized. Today, though, I've come to believe that all my past failure and frustration were actually laying the foundation for the understandings that have created the new level of living I now enjoy. As I continued my flight south along the coastal route, I spotted dolphins playing with the surfers in the waves below. It's a sight that my wife, Becky, and I treasure as one of life's special gifts. Finally, I reached Irvine. Looking below, I. was a little disturbed when I saw that the off ramp to my seminar was jammed with bumper-to- bumper traffic for more than a mile. 1 thought to myself, "Boy, I hope whatever else is going on tonight gets started soon so that the people coming to my seminar arrive on time.

5 ". But as I descended to the helipad, I began to see a new picture: thousands of people being held back by security where I was just about to land. Suddenly I began to grasp the reality. The traffic jam had been caused by people going to my event! Although we had expected approximately 2,000. attendees, I was facing a crowd of 7,000 in an auditorium that would hold only 5,000! When I walked into the arena from the landing pad, I was surrounded by hundreds of people who wanted to give me a hug or tell me how my work had positively impacted their lives. The stories they shared with me were incredible. One mother introduced me to her son who had been labeled "hyperactive" and "learning disabled." Utilizing the principles of state management taught in this book, she was not only able to get him off the drug Ritalin, but they had also since been transferred to California where her son had been retested and evaluated at the level of genius!

6 You should have seen his face as she shared with me his new label. A gentleman talked about how he had freed himself from cocaine using some of the Success Conditioning techniques you'll learn in this book. A couple in their mid-fifties shared with me that, after fifteen years of marriage, they had been on the brink of divorce until they learned about personal rules. A salesman told me how his monthly income had jumped from $2,000 to over $12,000 in a mere six months, and an entrepreneur related that he had increased corporate revenues by over $3 million in eighteen months by applying the 2. shroud 1. Leichentuch; 2. bertragen h llen 3. accomplish erreichen; leisten 4. dissipate (sich) zerstreuen; verschwenden 5. janitor Am. Hausmeister (in). principles of quality questions and emotional management.

7 A lovely young woman showed me a picture of her former self, having lost fifty-two pounds by applying the principles of leverage that are detailed in this book. I was touched so deeply by the emotions in that room that I got choked6 up, and at first I. couldn't speak. As I looked out on my audience and saw 5,000 smiling, cheering, loving faces, in that moment I realized that I am living my dream! What a feeling to know that beyond a shadow of a doubt I had the information, strategies, philosophies, and skills that could assist any one of these people in empowering themselves to make the changes they desired most! A flood of images and emotions flowed over me. I began to remember an experience I'd had only a few years before, sitting in my 400-square-foot bachelor apartment in Venice, California, all alone and crying as I listened to the lyrics of a Neil Diamond song: "I am, I said, to no one there.

8 And no one heard at all, not even the chair. I. am, I cried. I am, said I. And I am lost, and I can't even say why, leavin' me lonely still." I. remembered feeling like my life didn't matter, as if the events of the world were controlling me. I also remember the moment my life changed, the moment I finally said, "I've had it! I know I'm much more than I'm demonstrating mentally, emotionally, and physically in my life." I made a decision in that moment which was to alter my life forever. I decided to change virtually7 every aspect of my life. I decided I would never again settle for less than I could be. Who would have guessed that this decision would bring me to such an incredible moment? I gave my all at the seminar that night, and when I left the auditorium, crowds of people followed me to the helicopter to see me off.

9 To say I was deeply moved by the experience would be an understatement. A tear slid down my cheek as I thanked my Creator for these wonderful gifts. As I. lifted off the grass and ascended into the moonlight, I had to pinch myself. Could this be real? Am I. the same guy who eight years ago was struggling, frustrated, feeling alone and incapable of making my life work? Fat, broke, and wondering if I could even survive? How could a young kid like me with nothing but a high school education have created such dramatic changes? My answer is simple: I learned to harness the principle I now call concentration of power. Most people have no idea of the Giant capacity we can immediately command when we focus all of our resources on mastering a single area of our lives. Controlled focus is like a laser beam that can cut through anything that seems to be stopping you.

10 When we focus consistently on improvement in any area, we develop unique distinctions on how to make that area better. One reason so few of us achieve what we truly want is that we never direct our focus; we never concentrate our power. Most people dabble their way through life, never deciding to master anything in particular. In fact, I. believe most people fail in life simply because they major in minor things. I believe that one of life's major lessons is learning to understand what makes us do what we do. What shapes human behavior? The answers to this question provide critical keys to shaping your own destiny. My entire life has been continually driven by a singular, compelling focus: What makes the difference in the quality of people's lives? How is it that so often people from such humble beginnings and devastating backgrounds manage in spite of it all to create lives that inspire us?

Awaken the Giant Within - shamtimes

deep within each of us lies a special gift. You see, I truly believe we all have a sleeping giant within us. Each of us has a talent, a gift, our own bit of genius just waiting to be tapped. It might be a talent for art or music. It might be a special way of relating to the ones you love. It might be a genius for selling 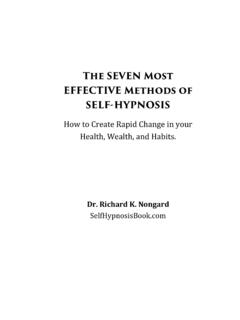 The SEVEN Most EFFECTIVE Methods of SELF-HYPNOSIS

Awaken the Giant Within stress the value of selfhypnosis- . This book reveals the most effective methods behind that advice and tells you exactly how you can maximize your success easily by mastering selfhypnosis in - one of seven different ways.

Within, Giant, Awaken, Awaken the giant within

Introduction: Whether you’re playing an all-monster party or just want to play a monstrous race in an otherwise normal party, this document presents rules for playing every creature in the Monster

Awaken the Giant Within, Monster