Banana Market Review 2015 -16. 1. Banana Market Review 2015 - 2016 . Food and Agriculture Organization of the United Nations Rome, 2017. The designations employed and the presentation of material in this information product do not imply the expression of any opinion whatsoever on the part of the Food and Agriculture Organization of the United Nations (FAO) concerning the legal or development status of any country, territory, city or area or of its authorities, or concerning the delimitation of its frontiers or boundaries. The mention of specific companies or products of manufacturers, whether or not these have been patented, does not imply that these have been endorsed or recommended by FAO in preference to others of a similar nature that are not mentioned.

1 Banana Market Review 2015 -16. 1. Banana Market Review 2015 - 2016 . Food and Agriculture Organization of the United Nations Rome, 2017. The designations employed and the presentation of material in this information product do not imply the expression of any opinion whatsoever on the part of the Food and Agriculture Organization of the United Nations (FAO) concerning the legal or development status of any country, territory, city or area or of its authorities, or concerning the delimitation of its frontiers or boundaries. The mention of specific companies or products of manufacturers, whether or not these have been patented, does not imply that these have been endorsed or recommended by FAO in preference to others of a similar nature that are not mentioned.

2 FAO encourages the use, reproduction and dissemination of material in this information product. Except where otherwise indicated, material may be copied, downloaded and printed for private study, research and teaching purposes, or for use in non-commercial products or services, provided that appropriate acknowledgement of FAO as the source and copyright holder is given and that FAO's endorsement of users' views, products or services is not implied in any way. All requests for translation and adaptation rights, and for resale and other commercial use rights should be made via or addressed to FAO information products are available on the FAO website ( publications) and can be purchased through Cover photos: Top cover photo: FAO/Simon Maina Bottom photos Left to Right: FAO/Daniel Hayduk; ivanmateev; ammit; FAO/Thony Belizaire Contents Foreword iv Developments in Banana trade 1.

3 Exports 1. Imports 2. Banana prices 3. Import prices 3. Wholesale and retail prices 4. Policy developments 5. Preliminary results for 2016 7. Supply challenges 7. iii Banana Market Review 2015 - 2016 . Foreword This report is issued on an annual basis to Members The Team on International Investment and Tropical and Observers of the Sub-Group on Bananas of the Fruits provides research and analyses on agricultural Intergovernmental Group on Bananas and Tropical investments in developing countries, and economic data Fruits, which is a subsidiary body of the Committee on and analyses on tropical fruits. Regular publications Commodity Problems (CCP).

4 Include Market reviews, outlook appraisals and projections for bananas and tropical fruits. The team also It is prepared by the Team on International Investment provides assistance to developing countries in designing and Tropical Fruits, Trade and Market Division, FAO, and implementing national policies regarding responsible Rome, and the tables contained bring together the investment in agriculture. information available to FAO, supplemented by data obtained from other sources in particular with regard to The report is available at the following FAO website: preliminary estimates. bananas/en/. iv Developments in Banana trade In 2015 , global Exports Banana exports registered the first In 2015 , global Banana exports, excluding plantains, registered the first decline since 2010 after having decline since reached an unprecedented peak of million tonnes in 20141.

5 While import demand remained strong in all regions, the adverse effects of the El Ni o weather phenomenon as well as the spread of the Fusarium Wilt 2010. disease negatively affected yields and resulted in production shortages in several of the major producing and exporting regions. Most of the decline was explained by a 50 percent drop in export quantities from the Philippines, the United States, exports from Peru increased by where a long period of drought heavily affected the 20 percent and reached 191 000 tonnes in 2015 . In quality and volume of production. The Philippines, the Caribbean, exports continued to be dominated previously the second largest global exporter by the Dominican Republic, which accounted for behind Ecuador, had reached a peak export volume 93 percent of the total volume exported by the of million tonnes in 2014, which declined region in 2015 .

6 However, Banana exports from to million tonnes in 2015 . Following lower the Dominican Republic dropped by 75 percent to shipments from the Philippines, the major export 138 000 tonnes after a tropical storm destroyed destinations Japan and China increased their orders some 40 percent of the crop in August 2015 . from Ecuador to meet domestic demand. Exports from Latin America and the Caribbean showed Asian exports declined by 46 percent in 2015 due to a 1 percent decrease due to lower shipments from the production drop experienced in the Philippines, Costa Rica and Colombia, two of the major exporters the largest exporter in the region, which accounts for in the region.

7 Costa Rica experienced production some 90 percent of the total export volume from Asia. shortages due to heavy rains and thus struggled to Adverse weather conditions and the Fusarium Wilt compete with the fierce price pressure on the world disease severely affected output in the Philippines. Market . Colombia was affected by extreme drought, India, by far the largest producer of bananas globally, low productivity levels, declines in harvested area increased its export volume by 47 percent due to and poor road conditions as strategic investments further expansion in the harvested area for traded were hampered by the weak Colombian peso.

8 Varieties. While Banana production in India primarily Export growth in Latin America mainly resulted targets the domestic Market , a growing share of from further growth of the two largest exporters production is exported to the Gulf countries, Malaysia Ecuador, which recovered from adverse weather and Nepal. Supply shortages in the Philippines, the conditions, and Guatemala, which benefitted from main competing exporter, meant that shipments from the free trade agreement with the United States India could benefit from high demand in the Gulf and preferential access to the European Union. Also countries and Southeast Asia.

9 Another supporting Peru saw fast export growth, benefitting from its factor was the low price of Indian bananas, which specialization in the production of organic bananas. reportedly sold at a 50 percent discount to bananas Aided by growing demand for organic bananas in from Ecuador and the Philippines at the Dubai auction. 1. For the purpose of this publication, the term bananas refers to bananas excluding plantains 1. Banana Market Review 2015 - 2016 . Gross imports by the European Union (EU) grew by Figure 1 3 percent, driven by strong consumer demand in the World Banana exports by region, 2011- 2015 major importing countries.

10 Also Eastern EU economies saw robust import growth. Gross import volumes Million tonnes by Slovakia, Poland and Estonia, for example, grew 20 by 13, 10 and 19 percent respectively, supported by rising incomes, declining import prices and changing consumer preferences. In Poland, for example, the 15 average import price in Euros declined by 19 percent between 2005 and 2015 . In Croatia, the accession to the European Union in July 2013 gave an added 10. impetus to import demand. Overall, imports into the European Union reached an unprecedented 5 million tonnes, with 70 percent of shipments originating from three large producers (Ecuador, Colombia and Costa Rica). 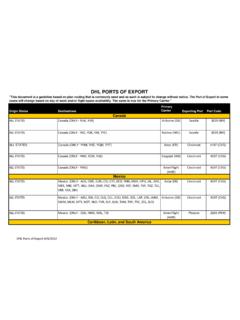 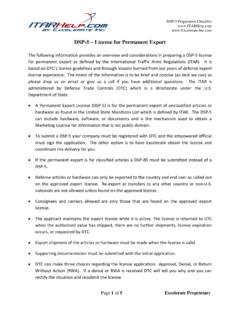 2 A No Process Flow Document Process Time Cost 1 Importer issues purchase order to exporter. An LC advise is issued by the bank (for applicable shipments)

Export Information and Documentation: A Guide for …

Export Price List August 2016 List in (with some exceptions) alphabetical order. When ordering, please use the article numbers (AN) to avoid mistakes. 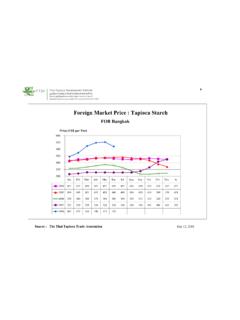