PUBLICATION 8083 FWQP REFERENCE SHEET Reference: Basic Concepts of Groundwater Hydrology THOMAS HARTER is UC Cooperative Extension Hydrogeology Specialist, University of California, Davis, and Kearney Agricultural Center. UNIVERSITY OF. L ife depends on water . Our entire living world plants, animals, and humans is unthinkable without abundant water . Human cultures and societies have rallied CALIFORNIA. around water resources for tens of thousands of years for drinking, for food produc- Division of Agriculture tion, for transportation, and for recreation, as well as for inspiration.

1 PUBLICATION 8083 FWQP REFERENCE SHEET Reference: Basic Concepts of Groundwater Hydrology THOMAS HARTER is UC Cooperative Extension Hydrogeology Specialist, University of California, Davis, and Kearney Agricultural Center. UNIVERSITY OF. L ife depends on water . Our entire living world plants, animals, and humans is unthinkable without abundant water . Human cultures and societies have rallied CALIFORNIA. around water resources for tens of thousands of years for drinking, for food produc- Division of Agriculture tion, for transportation, and for recreation, as well as for inspiration.

3 Although sufficient aquifers for this sort of use underlie much of California (Figure 1), the large metro- politan areas in Southern California and the San Francisco Bay Area rely primarily on surface water for their drinking water supplies. Overall, ground water supplies one- third of the water used in California in a typical year, in drought years as much as Farm water one-half. Quality Planning A water Quality and W H AT I S G R O U N D WAT E R ? Technical assistance Program Despite our heavy reliance on ground water , its nature remains a mystery to many for California Agriculture people.

4 Many find it hard to imagine that water can move underground at rates suffi- cient to allow California's largest springs to discharge almost 1 million gallons per minute ( , Fall River in Shasta County). Likewise, it is hard to understand how a This REFERENCE SHEET is part of domestic or irrigation well can extract from 500 to 2,000 gallons of water per minute the Farm water Quality out of a pipe in the ground that is merely 1 foot in diameter. More often than not, Planning (FWQP) series, people envision that ground water exists somehow in a mysterious, hidden system of developed for a short course underground rivers, reservoirs, and water veins.

5 Although these terms may be use- that provides training for grow- ers of irrigated crops who are ful when speaking metaphorically about ground water , they are far from accurate. interested in implementing Ground water is water that fills pores and fractures in the ground, much as milk water quality protection prac- tices. The short course teaches fills the voids within bits of granola in a breakfast bowl (Figure 2). The top of ground the Basic Concepts of water - water is called the water table. Between the water table and the land surface is the sheds, nonpoint source pollution unsaturated zone or vadose zone.

6 In the unsaturated zone, moisture is moving down- (NPS), self-assessment tech- ward to the water table to recharge the ground water . The water table can be very niques, and evaluation tech- close to the surface (within a few feet), or very deep (up to several hundred feet). In niques. Management goals and most California regions, the water table is between 10 and 100 feet below the land practices are presented for a variety of cropping systems. surface (in some Southern California desert basins it is as deep as 300 feet). It is in California's numerous valleys and intermontane basins that ground water exists in the greatest quantity (California and Nevada Groundwater basins are shown in Figure 1).

7 The basins are like large bathtubs enclosed by the rocks of surrounding mountains. Over millions of years, these bathtubs were filled with hundreds and even thousands of feet of sediment and debris that were carried into the basins by ANR Publication 8083 2. rivers and floods (Figure 3). In these so- called alluvial basins, ground water fills small, often microscopic pores between the grains of gravel, sand, silt, and clay. In the rocks that make up the hills and mountains of California's uplands, ground water is also quite common, although in most cases not nearly as plentiful.

8 In these rocks ground water occupies practically every fracture and fissure below the water table. However, unless fractures are large and numerous, little water can be extracted. AQ U I F E R S, AQ U I TA R D S, A N D. SPRINGS. A geologic formation from which significant Explanation amounts of ground water can be pumped Basin and Range aquifers for domestic, municipal, or agricultural uses Basin fill aquifers is known as an aquifer. In some cases, Carbonate-rock aquifers aquifers are vertically separated from each Volcanic rock aquifers other by geologic formations that permit lit- Central Valley aquifer system tle or no water to flow in or out.

9 A forma- Coastal Basins aquifers Miocene basaltic-rock aquifers tion that acts as such a water barrier is Northern California basin-fill aquifers called aquitard if it is much less permeable Northern California volcanic-rock aquifers than a nearby aquifer but still permits flow Not a principal aquifer 0 25 50 75 100 miles ( , sandy clay). If the water barrier is Volcanic- and sedimentary-rock aquifers 0 25 50 75 100 KILOMETERS. almost impermeable ( , clay) and forms a Base modified from Geological Survey digital data, 1:2,000,000, 1972 Albers Equal-Area Conic projection formidable flow barrier between aquifers, it Standard parallels 29 30' and 45 30', central meridian -96 00'.

10 Is known as an aquiclude. Figure 1. Groundwater basins of California and Nevada (Source: , Aquifers can be of two major types: USGS Groundwater Atlas Figure 11 in section HA 730-B). unconfined or confined. An unconfined aquifer has no overlying aquitard or aquiclude (Figure 4). Where there are multiple levels of aquifers, the uppermost aquifer typically is unconfined. Vertical recharge of an unconfined aquifer by rainwa- ter or irrigation water that filters downward through the soil is not restricted. The water table at the top of the unconfined aquifer can migrate freely up and down with- in the sediment formation, depending on how much water is stored there (Figure 3). 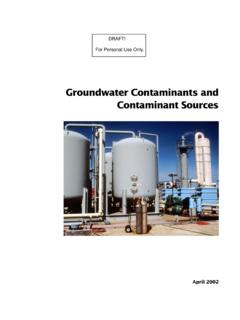 Groundwater Contaminants and Contaminant Sources April 2002. DRAFT! For Personal Use Only. ... California Groundwater Management, a handbook produced by the Groundwater Resources Association of California (GRA). Water quality parameters such … 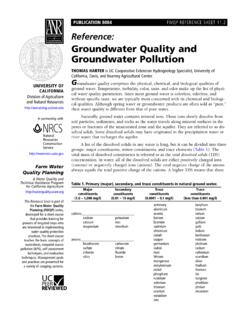 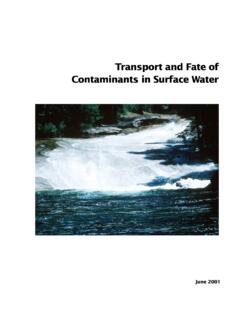 Transport and Fate of Contaminants in Surface Water

be degraded is necessary if the fate of the chemical is to be determined accurately. Solids in water exist in two forms: either as particulate (filterable) solids or as dissolved (nonfilterable) solids. Within each group, further differentiation can be made between organic (volatile) solids and … 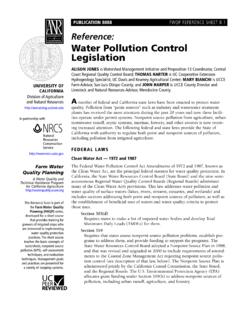 The Federal Water Pollution Control Act Amendments of 1972 and 1987, known as the Clean Water Act, are the principal federal statutes for water quality protection. In

The purpose of the screen is to keep sand and gravel from the gravel pack (described below) out of the well while providing ample water flow to enter the casing. 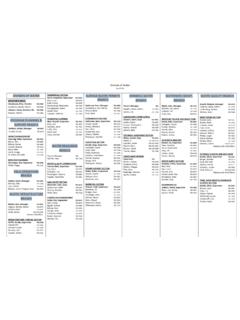 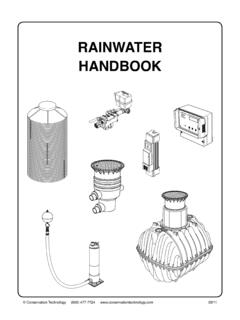 2 to appeal this decision, and we will be sure to keep you all apprised of that process. The Water Board is also in the process of determining how it …

Financing Options for Nontraditional Eligibilities in … 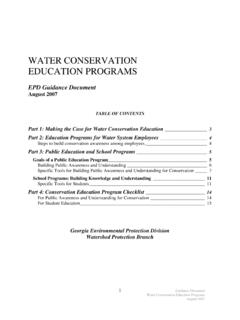