NOTICE IS HEREBY GIVEN that the Seventieth Annual General Meeting of the Company will be held on Monday, the 27th August, 2007 at …

5 The Board of Directors, Dividend at the rate of Re. (10 percent) per share be paid as Dividend By order of the Board for the year ended to those shareholders whose name appears in the register of members on 17th August, 2007. Hyderabad Ramalingan 30th June, 2007 Executive Director & Secretary RESOLVED FURTHER THAT the dividend warrants be posted to the respective shareholders within 30 days Notes : of declaration.. 3. APPOINTMENT OF DIRECTORS 1. In terms of Clause 49 of the listing agreement with To consider, and if thought fit, to pass with or without the Stock Exchanges, brief details regarding the modification, following resolution as an Ordinary Director's reappointment is given below : Resolution: RESOLVED THAT Mr.

6 V. Thirumal Rao, who retires by The profile of Rao who retires by rotation and being eligible for reappointment be and rotation and being eligible for reappointment as a is hereby appointed as a Director of the Company.. Director are as under : 4. APPOINTMENT OF AUDITORS. Mr. Thirumal Rao completed Bachelor of Commerce To consider, and if thought fit, to pass with or without from Osmania University in the year 1965 and modification, following resolution as an Ordinary Bachelor of Law in 1969. He started practicing in Resolution: Criminal and Civil side in Kurnool.

7 After practicing RESOLVED THAT the Auditors of the Company, for about 5 years, he shifted to Chennai. He was a Messrs. Deloitte Haskins & Sells (DHS), Chartered partner of Uttam Reddi & Co., a lawyer's firm, Accountants, Chennai who retire at this meeting, being from 1972 to 1979. During this period, he appeared before various High Courts, Supreme Court and Tribunal BEARDSELL LIMITED . on matters pertaining to Direct / Indirect taxes, Company 3. A member entitled to attend and vote at the Meeting is Law, Import and Export policy matters, Trade Marks, entitled to appoint a Proxy or Proxies to attend and Patents, etc.

8 He has vast experience and knowledge in vote instead of himself and such Proxy or Proxies need the above areas. He has been associated with Corporate not be a member or members of the Company. The Sector from 1979. He has worked in various Companies. At present he is looking after Excise, Proxy Form, duly signed, must be deposited at the Custom and Service tax matter, Company Law and Registered Office of the Company not less than 48. other areas of operations in MRF LIMITED . His hours before the time of holding the meeting.

9 Experience, knowledge in the legal profession and in 4. A Proxy can be in any of the forms set out in Schedule Corporate Sector has been of immense help to the IX of the Companies Act, 1956. Company. He was first elected to the Board in the year 1986. 5. The Register of Members and Share Transfer Books of As a member of Expert Committee of Madras Chamber the Company will remain closed from 18th August, 2007. of Commerce & Industry, he was actively involved in to 27th August, 2007 (both days inclusive). Chamber's activities including representing to the 6.

10 Members are requested to intimate change, if any, in Government in various issues. Mr. Thirumal Rao's experience in liasion work of interacting with in their addresses immediately. Government officials and close association with senior 7. The Company has already transferred the amount of most Lawyers in Supreme Court and Various High Courts all unclaimed dividends declared upto the period has also been very helpful to the Company. ended 31st March 1998 to the Investor Education Thirumal Rao is interested in this resolution. 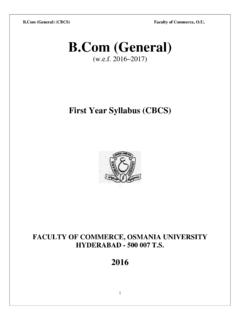 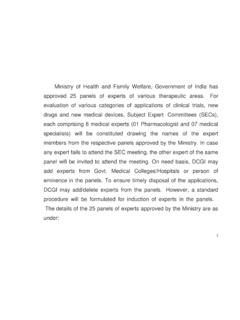 Ministry of Health and Family Welfare, …

1 Ministry of Health and Family Welfare, Government of India has approved 25 panels of experts of various therapeutic areas. For evaluation of various categories of applications of clinical trials, new

B. A. (PUBLIC ADMINISTRATION) SYLLABUS AND …