Beauties of the Truth

Beauties of the Truth A Forum for the Publication of Scriptural Viewpoints Thought to be Harmonious with God s Plan of the Ages volume 20, Number 1, February 2009. Principles of shall beat their swords into plowshares, and their spears Biblical Quotations into pruning hooks: nation shall not lift up sword against nation, neither shall they learn war any more.. We find that Micah 4:3 quotes this almost word for word. Holy men of God spake as they were moved by the Most of these Old Testament parallel quotations follow the holy Spirit (2 Peter 1:21). sense very closely, even if the words are not always identi- From time to time we note what appear to be inaccura- cal. We do find some transcription errors when two accounts cies when New Testament writers quote from the Old describe the same historical event.

Beauties of the Truth A Forum for the Publication of Scriptural Viewpoints Thought to be Harmonious with God™s Plan of the Ages Volume 20, Number 1, February 2009

1 Beauties of the Truth A Forum for the Publication of Scriptural Viewpoints Thought to be Harmonious with God s Plan of the Ages volume 20, Number 1, February 2009. Principles of shall beat their swords into plowshares, and their spears Biblical Quotations into pruning hooks: nation shall not lift up sword against nation, neither shall they learn war any more.. We find that Micah 4:3 quotes this almost word for word. Holy men of God spake as they were moved by the Most of these Old Testament parallel quotations follow the holy Spirit (2 Peter 1:21). sense very closely, even if the words are not always identi- From time to time we note what appear to be inaccura- cal. We do find some transcription errors when two accounts cies when New Testament writers quote from the Old describe the same historical event.

2 However, these are very Testament. Sometimes words are left out, added, or few and most are clarified by other scriptures. In fact it is changed. Many times what we have learned in the Harvest amazing to think of thousands of copies of the scriptures, Message applies to the second advent, is applied to the first transcribed by hand over thousands of years, with so very advent. Other times a quote seems unrelated to the original few scribal errors part of God s overruling providence. scripture. In this study we consider some of the principles (2) Secular Poets cited by Paul. This category is small at work in these cases, to determine the reason for what at with only four instances that are not of much significance. first seems to be an inconsistency.

3 An example is when Paul at Athens on Mars Hill spoke to the Greeks about the Unknown God, as he quoted from The Bible is the Word of God. We should not think of the two Greek Poets in Acts 17:28. For in him we live, and writers as being merely human agents like ourselves, who move, and have our being; as certain also of your own poets frequently make mistakes in quoting or injecting our own have said.. ideas. In the past God spoke to our forefathers through the prophets (Hebrews 1:1, NIV). No prophecy of Scripture is (3) Quotations in the New Testament from the Old Testa- a matter of one s own interpretation, for no prophecy was ment. This is the most fertile ground for examination, and ever made by an act of human will, but men moved by the here we spend the chief part of our investigation.

4 New Tes- holy Spirit spoke from God (2 Peter 1:20, 21, NAS). tament quotations from the Old testament often differ con- siderably. The most important reason for this is that almost This does not mean that there are no errors in our com- mon version. It is estimated that there are literally thou- IN THIS ISSUE. sands in it. However, most of these are due to errors of translation from the original Hebrew and Greek into Eng- Thus it is important to check various translations. Principles of Biblical Quotations .. 1. I usually at least check Rotherham, the most accurate trans- Memorial Observances .. 4. lation overall, and the Hebrew and Greek lexicons in Strong s Memorial Dates .. 5. Concordance to see the true meanings of the original words.

5 Lunar and Solar Calendar .. 7. THREE TYPES OF QUOTATIONS A Passover Experience .. 8. There are three types of quotations in the scriptures: Financial Report .. 8. (1) Old Testament passages quoted by later Old Testament writers, (2) secular poets quoted by Paul, (3) Old Testament Beauties OF THE Truth is published as a service to the brethren passages quoted in the New Testament. to stimulate their appreciation of the riches of God s Word. It is pub- lished free of charge. Subscriptions will be entered for all requestors. (1) Old Testament Citations in the Old Testament. There Address: Beauties of the Truth , 6748 Breckenridge, Lisle, IL 60532. Editorial Board: Brothers Richard Doctor (Managing Editor), are many examples. We will cite just one example, com- O.

6 B. Elbert, Raymond Luke, David Rice, Tom Ruggirello, David paring Isaiah 2:4 with Micah 4:3. And he shall judge among Stein, Richard Suraci. See us online at many people, and rebuke strong nations afar off; and they all of these quotes are drawn from the Septuagint. This was a Greek translation of the Hebrew scriptures for the benefit of Greek-speaking Jews dispersed in Egypt and various other countries, who were no longer fluent in Since the apostles were told by our Lord to make dis- ciples of people of all nations, it is easy to understand why they wrote the New Testament in Greek, the common uni- fying language of the day in the near east. Naturally, they would quote the Greek translation of the scriptures when citing the Old Testament.

7 Thus the main reason for the differences in the wording of the New Testament quotes of the Old Testament, as we Reverent study of the Word of God is highly commendable. will see, is that the Greek Septuagint was not a very accu- rate translation. However, it is beautiful to note that God s holy Spirit overruled the matter. Sometimes the thought Hebrew, Zechariah 9:9, Shout, O daughter of Jerusa- lem: behold, thy King cometh unto thee. The Septuagint being conveyed was the same. At other times, when the translated it, Make proclamation, O daughter of Jerusalem! Septuagint expressed an incorrect thought, the matter was Behold thy king is coming for thee. But again, this error overruled so that the New Testament writer translated the was corrected by Matthew.

8 Tell ye the daughter of Sion, Hebrew, rather than using the Septuagint. Behold, thy King cometh unto thee (Matthew 21:5). THE THOUGHT IS THE SAME At other times, when the difference involved in the Septuagint translation was slight, and it did not interfere Following are two examples of the first case, where the with the purpose which the New Testament writer had in thought is the same in both the Septuagint and Hebrew ver- view, the Septuagint version was allowed to remain. sions, even if different words are used. Hebrew, Isaiah 45:23, I have sworn by myself .. That THE BOOK OF HEBREWS. unto me every knee shall bow, every tongue shall swear. In the entire book of Hebrews all quotations but one are This is cited from the Septuagint in Romans 14:11, For it from the Septuagint and were not changed.

9 Here are two is written, As I live, saith the Lord, every knee shall bow to examples. me, and every tongue shall confess to God. The words may vary, but the thought is basically the same. Psalms 40:6, Sacrifice and offering thou didst not desire; mine ears hast thou opened. The Greek Septuagint, Hebrew, Isaiah 28:16, Behold, I lay in Zion for a foun- Sacrifice and offerings Thou didst not desire, but preparedst dation a stone, a tried stone, a precious corner stone, a sure for me a body. Now notice that the New Testament quota- foundation. This is cited from the Septuagint in 1 Peter tion kept this Septuagint rendering. Sacrifice and offering 2:6, It is contained in the scripture, Behold, I lay in Sion thou wouldest not, but a body hast thou prepared me.

10 A chief corner stone, elect, precious. The basic thought (Hebrews 10:5). is the same, even though the Septuagint is not an exact The Hebrew Old Testament phrase, mine ears thou hast translation. opened, is a metaphor. For a person s ears to be opened THE SENSE IS DIFFERENT. implies they obeyed God s word. The New Testament Septuagint rendering, a body hast thou prepared me, was However, there are other times that the Septuagint defi- allowed to remain because it actually gave a deeper under- nitely gives the wrong thought as compared to the original standing to the Hebrew. For it tells us how Jesus ears were Hebrew. When this occurred, notice how wondrously the opened allowing him to obey. It was because God did pre- Lord overruled in the following examples. 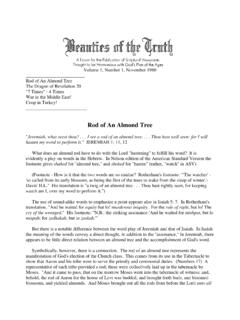 Rod of An Almond Tree - Beauties of the Truth

The internal evidence from the book of Revelation seems to support the conclusion that the dragon of chapter 20 is the civil power heretofore discussed.

Sermons of Truth and Reason: Vol ume I Capsule Sermons Gene Taylor-2- The Atonement of Christ Introduct ion 1. The sacrifice of Jesus was eternally purposed by God to atone for man’s sins.

2SG - Spiritual Gifts. Volume 2 (1860) Preface. Having borne my testimony, and scattered, several books containing my visions, in the Eastern, Middle, and Western States, and formed many happy acquaintances, I have felt it my duty to give to

The Truth about Speed Enforcement How radar and laser guns measure your speed • Why they make mistakes How they are used unfairly • How to protect yourself The secret they don’t want you to know: When traﬃc radar shows a speed reading, it does not indicate which vehicle is being clocked.

Enforcement, About, Speed, Truth, The truth about speed enforcement

Bible Greats: Volume II Gene Taylor-1- Preface The theme for these sermons is: “Great Bible Examples.” This series focuses on four of the many great examples in the Bible—Abraham, Joseph, Moses, and David— and then closes

iv. B. The New King James Version (NKJV) is a word-for-word literal translation based on the Greek manuscript tradition known as the Textus Receptus.