3 Credit Report Lloyd’s is a significant writer of catastrophe and reinsurance business and is also a leading player in its core marine, energy, aviation and specialty markets.

2 The exposure of central resources to insolvent members has fallen significantly over the past 10 years and is now at a very low level. When setting the member level capital requirement, lloyd 's applies a 35% economic capital uplift to each syndicate's solvency capital requirement. This level of uplift has been retained for 2017 , but should it change, best will review the implications for risk-adjusted capitalisation and react accordingly. lloyd 's financial flexibility remains good, enhanced by the diversity of its capital providers, which include corporate and non-corporate investors. lloyd 's operating performance has been good in recent years, supported by strong technical performance as demonstrated by an average five-year combined ratio of 90% (2012-2016). The combined ratio deteriorated in 2016 to 97% (2015: 89%), primarily due to a higher major loss burden and a reduction in reserve releases.

3 Major losses accounted for approximately 9% of net earned premiums in 2016, which is in line with the market 's 10-year average. Assuming average catastrophe experience, technical performance in 2017 is expected to be in line with 2016. lloyd 's benefits from an excellent position in the global insurance and reinsurance markets. The collective size of the lloyd 's market and its unique capital structure enable syndicates to compete effectively with large international insurance groups under the well-recognised lloyd 's brand. However, an increasingly difficult operating environment poses challenges to lloyd 's competitive position. In particular, the growth of regional (re)insurance hubs, combined with the comparatively high cost of placing business at lloyd 's, is reducing the Analytical Contacts: Mathilde Jakobsen, London flow of business into the London market .

4 There has been a proactive response by lloyd 's +44 20 7397 0266 to these threats. Improved access to international business is being supported by the Vision 2025 strategy and the establishment of regional platforms, and lloyd 's continues to implement initiatives to improve efficiency and reduce operating costs. best will Catherine Thomas, London continue to closely monitor lloyd 's ability to defend its strong competitive position against +44 20 7397 0281 the prevailing market headwinds. David Drummond, London Upward Rating movements are considered unlikely in the short term. Longer term, positive +44 20 7397 0327 Rating pressure could arise if lloyd 's business profile and operating performance remain strong in spite of challenging market conditions. John Andre, Oldwick +1 (908) 439-2200 Ext. 5619 An increase in risk-adjusted capitalisation from the current strong level could lead to positive Rating pressure, if best expected risk-adjusted capitalisation to be maintained at this SR- 2017 -830.

5 Higher level long term. Copyright 2017 best Company , Inc. and/or its affiliates. ALL RIGHTS RESERVED. No part of this report or document may be distributed in any electronic form or by any means, or stored in a database or retrieval system, without the prior written permission of best . For additional details, refer to our Terms of Use available at best website: Credit Report Unexpectedly weak operating performance would put downward pressure on the ratings . An erosion of risk-adjusted capitalisation, for instance as a result of a substantial loss to the Central Fund or due to lower capital requirements set by lloyd 's, would put downward pressure on the ratings . Business Review lloyd 's occupies an excellent position in the global general insurance and reinsurance markets as a specialist writer of property and casualty risks. The competitive strength of lloyd 's derives from its reputation for innovative and flexible underwriting, supported by the pool of underwriting expertise in London.

6 Although lloyd 's syndicates operate as individual businesses, the collective size of the market allows them to compete effectively with major international groups under the well-recognised lloyd 's brand and with the support of the Central Fund. Since 2001 especially, the lloyd 's market has withstood strong competition from Bermuda and other international markets and enhanced its business profile by the resilience of its operating performance and capitalisation in difficult economic conditions. It has proved attractive to international investors in recent years, as demonstrated by numerous acquisitions of lloyd 's managing agents. Furthermore, while a number of traditional lloyd 's businesses have established alternative underwriting platforms, they have remained committed to the lloyd 's market . Excluding reinsurance to close syndicates, but including special-purpose arrangements (SPA), there were 96 syndicates at 1 January 2017 , down from 98 at 1 January 2016.

7 Four new syndicates and one SPA entered the market while two syndicates merged into other syndicates and two syndicates and three SPAs ceased at the end of 2016. The competitive position of lloyd 's and the London market is increasingly under threat from the growth of local and regional (re)insurance hubs and a preference by clients to place business locally. In response to this threat, lloyd 's launched its Vision 2025 in May 2012, aiming to be the global centre for specialist insurance and reinsurance . Described as a new strategic direction, Vision 2025 has at its heart profitable, sustainable growth, particularly from emerging and developing economies. This vision is reviewed annually in the context of global economic developments and the state of the insurance industry. Progress towards the vision, together with the further steps that the lloyd 's market must take to achieve it, is set out in lloyd 's latest three- year plan, lloyd 's Strategy 2017 -2019, published at the end of March 2017 .

8 A more urgent threat to the competitive position of lloyd 's is the United Kingdom's decision, taken in a referendum held in June 2016, to leave the European Union (EU). In late March 2017 , the government gave formal notice, under Article 50 of the EU's Lisbon Treaty, of the country's intention to withdraw from the EU. Under these guidelines, this gave the EU two years in which to negotiate and conclude an agreement with the , setting out the arrangements for its withdrawal, taking account of the framework for its future relationship with the EU. Membership of the EU gives businesses in any member state the right to trade throughout the EU. Depending on the outcome of the exit (so-called Brexit ) negotiations, leaving the EU could restrict the access of lloyd 's to European insurance business. Since the referendum, lloyd 's has devoted significant resources to assessing the options for it to continue to access EU markets.

9 Within days of Article 50 being invoked, lloyd 's announced that it would establish a European insurance Company in Brussels that would be ready to write business from 1 January 2019, subject to regulatory approval. best will monitor closely lloyd 's on-going ability to access EU insurance business. 2. Credit Report lloyd 's is a significant writer of catastrophe and reinsurance business and is also a leading player in its core marine, energy, aviation and specialty markets. Direct business continues to form the larger proportion of lloyd 's overall underwriting portfolio, with insurance representing of gross premium in 2016 (2015: ) and reinsurance accounting for the balance. Exhibit 1 shows lloyd 's calendar- Exhibit 1. year premium in 2015 and 2016, Calendar Year Gross Written Premium by Main split by the principal lines of Business Class (2015-2016). 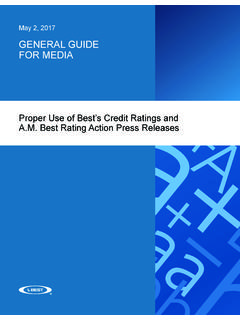 General Guide for Media: May 2, 2017 Page 2 of 5 I. Introduction This document outlines the proper use of A.M. Best Rating Services, Inc.’s (A.M. Best) 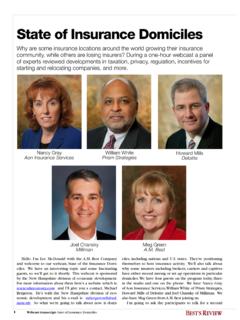 BeSt’S RevIew Webcast transcript: State of Insurance Domiciles about who they are and a little bit about their organization. Nancy, why don’t we start with you? GRAY: thank you, Lee. I’m been involved with the cap-tive insurance industry … 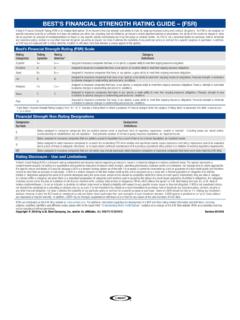 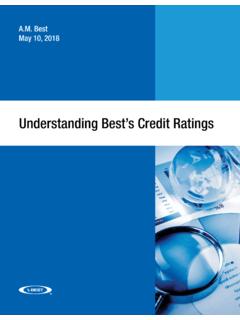 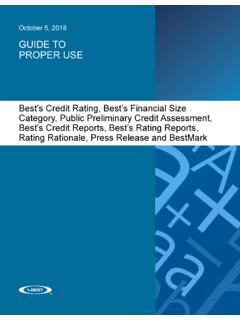 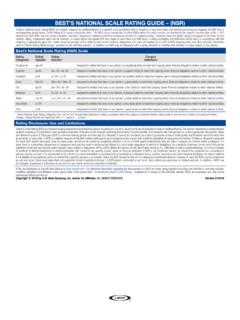 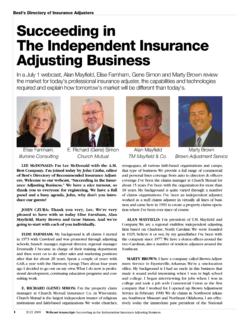 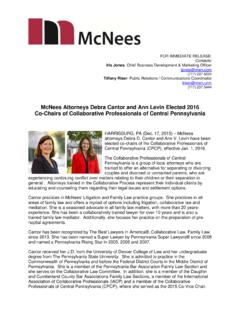 McNees Attorneys Debra Cantor and Ann ... She is a member of the Pennsylvania Bar Association ... divorce clients who desire to move beyond the divorce and ...

The State of Sustainable Markets 2017 - ITC

THE STATE OF SUSTAINABLE MARKETS 2017 About the report Voluntary sustainability standards are in the mainstream, and no longer a novelty for niche markets.

8 EY Wealth Management Outlook - 2017 A look at individual markets reveals that more than half of global NIA growth through 2021 stems from the top five ranking countries. The US and China alone account for over 45%.

THE STATE OF FOOD AND AGRICULTURE

Food and Agriculture Organization of the United Nations Rome, 2017 2017 THE STATE OF FOOD AND AGRICULTURE LEVERAGING FOOD SYSTEMS FOR INCLUSIVE RURAL TRANSFORMATION 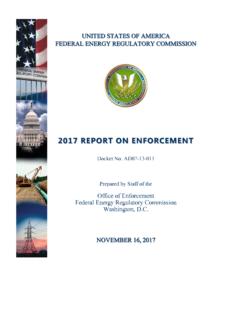 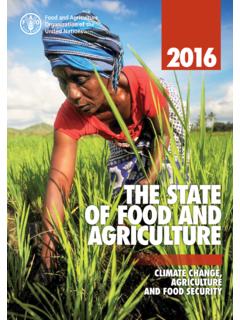 Food and Agriculture Organization of the United Nations Rome, 2016 2016 THE STATE OF FOOD AND AGRICULTURE CLIMATE CHANGE, AGRICULTURE AND FOOD SECURITY