5 (` Lacs) DIRECTORS AND KEY MANAGERIAL PERSONNEL (KMP). Changes in the composition of the Board of Directors and other Particulars Year Ended Key Managerial Personnel 31st March 31st March Smt. Monica Aggarwal joined the Board as an Additional Independent 2017 2016. Director in its meeting held on 12th December 2016. Gross Revenue There is no change in the Key managerial personnel of the Company Profit /Loss Before Depreciation and ( ) ( ) during the year under review except the appointment of Mr. Neeraj Singal Tax as Chief Executive Officer (CEO) and Mr. Nittin Johari as Chief financial Depreciation & Amortisation Officer (CFO) Profit /Loss Before Tax ( ) ( ) Currently the Board of Directors of the Company consists of 17 directors, Provision for Deferred Tax ( ) ( ) out of which Nine are Independent directors, Three are Nominee directors, Four are Executive directors and One is Non-executive Chairman.

6 Profit /Loss After Tax ( ) ( ). Total Comprehensive Income ( ) ( ) Independent Directors' Declarations All Independent directors have given declarations that they meet the Profit /Loss brought forward from ( ) ( ). criteria of independence as laid down under section 149 of the Companies Previous Year Act, 2013 which has been relied on by the Company and placed at the Profits/Loss available for appropriation ( ) ( ) Board meeting. As per IND - AS Retirement by rotation DIVIDEND In terms of Section 152 of the Companies Act, 2013 Mr. Nittin Johari and Mr. Rahul Sen Gupta Directors would retire by rotation at the forthcoming In view of the loss incurred during the financial year ended March 31,2017, AGM and is eligible for re-appointment.

7 Mr. Nittin Johari and Mr. Rahul the Board does not consider it expedient to recommend any dividend. Sen Gupta, Directors of the Company have offered themselves for the OPERATIONS AND THE STATE OF COMPANY'S AFFAIRS reappointment. GROSS REVENUE AND EXPORTS: Further as per the requirement of Companies Act, 2013, the following During the year your Company has achieved the Gross sales of ` 15027 policies of the Company are attached herewith marked as Annexure A'. Crores in comparison of previous year's level of ` 13124 Crores. and Annexure B'. a) Policy for selection of Directors and determining Directors Further the company has achieved the Export Turnover of ` 2863 Crores, independence; and registering a growth of 139% over previous year's level of ` 1198 crores.

8 The export turnover during the FY 2016-17 is higher due to increase b) Remuneration Policy for Directors, Key Managerial Personnel and demand of HR coil in international market. First time our company has other employees. started to export HR coil in such a huge quantity. The major shipment has corporate SOCIAL RESPONSIBILITY (CSR). been exported to South East Asia and Europe. Pursuant to the provision of Section 135 of the Companies Act 2013 read With a firm commitment and through sustained efforts, your company with CSR Rules the Company has constituted a CSR Committee consisting continues to maintain good rapport with Global Customers.

9 Our quality of three Directors, of which one is Independent Director. The composition, products and timely delivery have found wide acceptance in the highly terms of reference etc. of the CSR Committee are laid out in the corporate competitive international market. Our products are being exported across governance Report which forms part of this Annual Report. the globe. The CSR policy of the Company has been uploaded on the Company's COMPLETION OF BALANCE CAPEX FACILITIES : website Your company is under implementation of completion of balance capex In pursuance of the provisions of the Companies Act, 2013 and CSR Policy facilities like Coke Dry Quenching and Reheating Furnace.

10 These facilities of the Company it is required to spend two percent of the average net are expected to be completed in FY 2017-18. profits of the Company for the three immediately preceding financial years. The Company incurred heavy losses in preceding two financial years FINANCE: and the average net profit for three financial year is in negative thus the The Working Capital facilities for its Sahibabad, Khopoli and Orissa Plants company was not required to spend any money for CSR activities during were last sanctioned for the FY 2014-15. Thereafter no enhancement in the current financial year ending March 31, 2017. working capital facilities were sanctioned to the company. 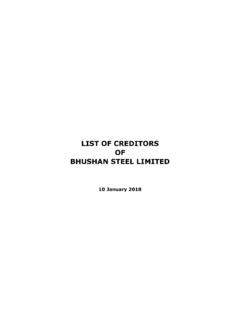 Page 3 of 58 LIST OF CLAIMS BY FINANCIAL CREDITORS OF BHUSHAN STEEL LIMITED (As of claims received till 10 January 2018) S. No. Name Claimed amount (3

Page 2 of 46 IMPORTANT NOTICE 1. The list of creditors presented in the following pages is as of claims received till the date mentioned in the respective section NOTICE IS HEREBY GIVEN THAT THE ... - BHUSHAN …

01 notice notice is hereby given that the 29th annual general meeting of the members of bhushan steel limited will be held on monday, the 24th day of september, 2012 at 11.00 a.m at the air force 01 notice notice is hereby given that the 30th annual general meeting of the members of bhushan steel limited will be held on saturday, the 21st day of september, 2013 at 11.00 a.m at the air force

2 which term shall be deemed to include any committee thereof) for borrowing, from time to time, any sum or sums of monies which together with the monies already borrowed by the Company (apart Consolidated Financial Statements under US GAAP … Annual Financial Statements for the 52 week …