Biblical Principles for Interpreting God's Word By Cooper P. Abrams, III. All rights reserved Introduction It is apparent from all the contradictory teachings of the many denominations and cults of Christendom, that they all cannot be right. For the most part, each claims to use the Bible as the source of their teachings. For example, most Biblical churches teach that salvation is by one's faith through God's grace apart from works. However, some churches emphatically teach that works such as baptism is necessary for salvation. Both may claim the Bible as the source of their belief. Roman Catholics and most Protestants practice baptism by sprinkling whereas Baptists baptize by immersion. The Roman Catholic Church teaches it is the only true church, and that Peter was the first pope based on their interpretation of Matthew 16:18. No one else outside Catholicism accepts this interpretation .

1 Biblical Principles for Interpreting God's Word By Cooper P. Abrams, III. All rights reserved Introduction It is apparent from all the contradictory teachings of the many denominations and cults of Christendom, that they all cannot be right. For the most part, each claims to use the Bible as the source of their teachings. For example, most Biblical churches teach that salvation is by one's faith through God's grace apart from works. However, some churches emphatically teach that works such as baptism is necessary for salvation. Both may claim the Bible as the source of their belief. Roman Catholics and most Protestants practice baptism by sprinkling whereas Baptists baptize by immersion. The Roman Catholic Church teaches it is the only true church, and that Peter was the first pope based on their interpretation of Matthew 16:18. No one else outside Catholicism accepts this interpretation .

2 Even the "Christian" cults such as the Jehovah's Witnesses use the Bible to deny the deity of Jesus Christ, the existence of Hell, and most carnal doctrines of the Christian faith. The Mormons, another cult, uses the Bible verses such as 1 Corinthians 15:29 as the source for their practice of baptisms for the dead. They believe that God was once a mortal man who became a god, is married, and is the God of earth. They believe if they are worthy to their church (the Mormon Gospel) and do enough good works they can become gods and have their own world to rule. They are offended when they are not identified as Christians. No one else accepts their belief or interpretations. Seventh Day Adventists and several other churches have their church services on Saturday, the Jewish "Sabbath Day." They teach this based on their understanding of the Bible 's instruction concerning the Sabbath.

3 Pentecostal churches and the modern Charismatic movement teach speaking in "tongues" and miracle healings are valid gifts of the Holy Spirit today. All fundamentalists and Biblical Christian churches strongly disagree. It is easy to see that the many different sects of "Christendom" use the Bible to prove contradictory teachings. Paul Lee Tan, in his book Literal interpretation of the Bible says, Apparently the Bible can be made to prove almost anything. 1 Considering all the contradictions in the various teachings, all supposedly based on the Bible , one must ask the question, "Who is right? Surely, God is not teaching, for example, that one is saved by earning salvation by good works and also teaching man is saved by God's Grace without works. God says, For by grace are ye saved through faith; and that not of yourselves: it is the gift of God: Not of works, lest any man should boast.

4 1. (Ephesians 2:8-9) There is nothing ambiguous in the words or structure of the verses. God plainly states works do not save and that salvation by God's grace through faith as a gift. Gifts are not earned. God cannot contradict Himself nor can He lie. The question is then can God's Truth be determined with absolute certainty? Hanging in the balance is the knowledge of God's Truth and the eternal destiny of every soul on earth. Where then is the problem in determining what is God's true word? God says in 1 Corinthians 14:33, He, God, is not the author of confusion.. Therefore, the problem is not with God, but with finite men who for various reasons misused His word knowingly or negligently. Clearly, men have taken great latitude in Interpreting what the Bible says. It should be obvious that God did not give us His written word to be a source of confusion or contention.

5 God gave us His word in written form, whereby it would be available, so that everyone could know His Truth . Further, He wrote it in such a way as to be clear and not complicated nor misleading. He said in 2. Peter 1:20, Knowing this first, that no prophecy of the scripture is of any private interpretation . The word translated interpretation is only found in this verse in the Bible and means an explanation. Thus, private interpretation means the prophets did not write their own opinions, but rather as verse 21 confirms, wrote word God's very words. For the prophecy came not in old time by the will of man: but holy men of God spake as they were moved by the Holy Ghost. (2 Peter 1:21). This is the first principle of Interpreting God's written word. That simply means that no one person, church or group has the exclusive interpretation of God's word.

6 The Scriptures can accurately be understood by all. This answers several important questions. First, can we absolutely know what is God's Truth ? Second, What teacher or church is right? The answer is that the ones who are right are the ones who correctly interpret God's word. More will be said about this through the article. However, the problem is that sinful and fallible men have ignored what the Bible literally says and stated what the think it says, gave their opinion, or what it means to them. That is not an acceptable hermeneutic, 2 which refers to the science of interpretation . Scripture is not what we think it says or what it means to us, but rather literally, what God plainly stated. In other words, Truth is what God literally said when He communicated His word in language to those He chose to record it. God chose the correct words, placing them in the proper grammatical order to convey what He wanted to reveal.

7 Sadly, ignoring this basic Truth of how God communicated His revelation to 2. us has caused great confusion and division among those seeking to know the Lord and His Truth . The tragedy is that it need not be so! All this confusion is not caused by God. It would make no sense for God to give us His written word if we could not clearly and accurately know the Truth it teaches. That would mean that God authored confusion, which He absolutely denies. It would also mean that a man could not truly know what is right or wrong concerning God. That is totally not acceptable, as God is perfect and omniscient. He does not make mistakes. For example: When a person applies for a driver's license they are given a manual to study. The manual contains the necessary instructions for one to pass successfully a written exam. It clearly states the laws that govern driving a vehicle safely using correct grammar, spelling, and definitions of words.

8 Suppose you ignore what the manual states and on your exam, answer the questions with your opinion or what you think the answer should be? Your test would be graded by the examiner based on the law as stated in the manual, and if you did not give the proper answers from the manual, you would fail the exam and not get a license. God's word is no different. The Bible was written in the language of men and can be easily understood if we follow the proper rules of language. Nothing is cryptic in the way that God inspired what He wanted to reveal. It is not complicated and in fact written very simple and all men can understand it correctly. God states in Romans 10:17, So then faith cometh by hearing, and hearing by the word of God. This statement would mean nothing if we could not understand the written word. The question that begs an answer is how can a man have faith, which comes from hearing the word of God, if he cannot absolutely know what that word is?

10 God's word, properly interpreted, frees us from the lies and distortions of Satan who seeks to distort and confuse the understanding of God's word. A belief in God's word overcomes not only, sin and death, but also false doctrine that enslaves a man and separates him from God. 3. The great need today, then, in determining what the Bible really teaches, is to determine the correct and Biblical method of interpretation . If the Bible is the Word of God and God's revelation to man, then surely God would give us a way to discern accurately what He meant. For God not to give us a way to interpret the Bible is to leave the interpretation of Scripture to human wisdom that is at best faulty. To have the interpretation of scripture rest on man's wisdom is to have flesh Interpreting that which is spiritual. The word interpretation means to arrive at the original meaning the writer intended when he penned the words. 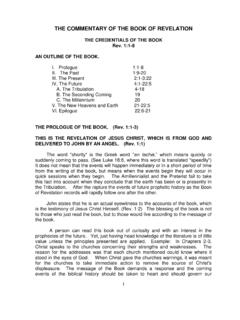 THE COMMENTARY OF THE BOOK OF REVELATION - Bible …

The Book is giving special instruction to the seven churches in located in Asia. These churches were located at Ephesus, Smyrna, Pergamos, Thyatira, Sardis, Philadelphia, and Laodicea.

Book, Commentary, The commentary of the book of 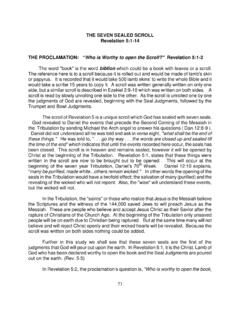 THE SEVEN SEALED SCROLL Revelation 5:1-14 THE …

73 THE SEVEN SEALED SCROLL Revelation 5:1-14 THE PROCLAMATION: “Who is Worthy to open the Scroll?” Revelation 5:1-2 The word "book" is the word biblion which could be a book with leaves or a scroll. The reference here is to a scroll because it is rolled out and would be made of lamb's skin 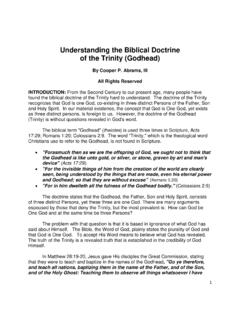 Understanding the Biblical Doctrine of the Trinity (Godhead)

us to explain how this can be a reality in our physical/material world. But they are wrong in denying that God is a Triune God. The approach of this paper will be first to authenticate the biblical doctrine by presenting biblical statements attes ting to this truth. One reason those who deny the Trinity do so is the Bible clearly teaches 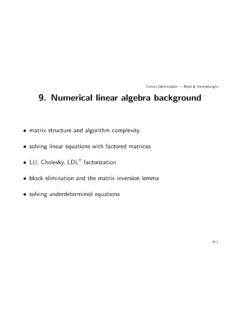